A few weeks ago i've received a card from one of our archipelagos, Madeira and some days ago arrived this one from the other archipelago, the Azores. The card is from Ponta Delgada, the capital of São Miguel island and it shows the city's gates "Portas da Cidade".
The card was sent by Cristina. 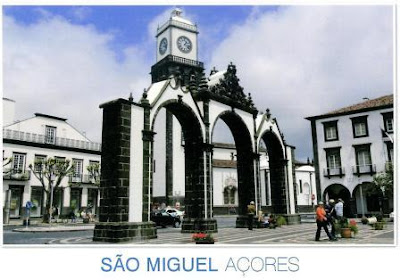 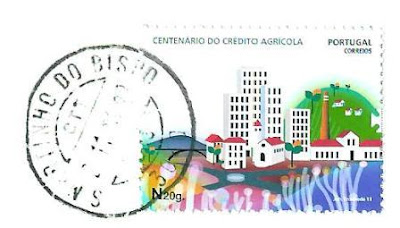 "The "Portas da Cidade", the landmark of Ponta Delgada, were erected in the 18th century next to an extinct quay. Later they moved to Gonçalo Velho Cabral square during the works carried out in Infante Dom Henrique Avenue. These 3-arch doors present Royal and city’s coat of arms in the middle, standing out as the main highlight of the city. The imposing historically relevant Portas da Cidade have been classified National Trust Building." - in: http://en.lifecooler.com/lifecooleren/portas-da-cidade-city-s-doors-buildings-of-interest-relevant-390158-1.html