I've been to Helsinki last year but didn't get to see this monument.
The 1st card was sent by Maija and the 2nd is one of my 1st oficial cards from Finland, received in 2006. 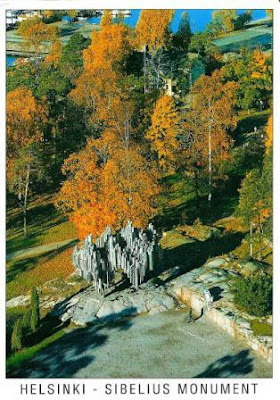 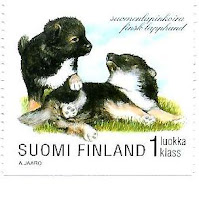 The world famous composer Jean Sibelius' (1865-1957) monument by Eila Hiltunen is located at the Sibelius park. It was unveiled 7 September 1967. 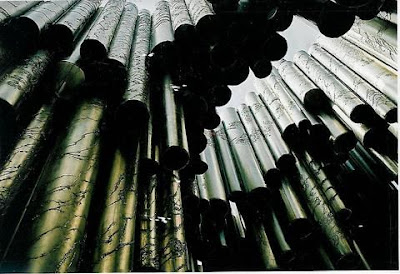 FI-93417, sent by Annette.
The Sibelius Monument, resembling organ pipes, is made of welded steel with over 600 pipes and with the bust of the composer on one side. The monument is one of Helsinki's most popular statues and one of the most well-known tourist attractions. - in: https://www.myhelsinki.fi
By Martinha at 23:21 No comments:

Getting officials from Sweden doesn't happens that often.
The medieval church in the north of the island of Visingsö in Lake Vättern is best known nowadays for its cut-off tower, from which visitors can enjoy the view. 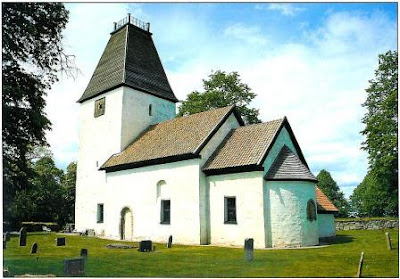 SE-184211, sent by Annette.
Kumlaby Church was built in the 12th century using local slate, with sandstone door and window frames. The church comprises nave, chancel, apse and a west tower added slightly later. In the 15th century, the church was vaulted and decorated with frescos depicting motifs from the legends of the saints and medieval symbolism.
During the 16th century, the island’s two parishes were merged into one and, in 1636, all church activity was moved to the newly completed Brahe Church. Per Brahe the Younger then converted the abandoned church into schoolrooms for the school he had founded: ‘Schola Brahea’, the Visingsborg School. Among other things, he had the steeple removed and built a platform there for the pupils to study astronomy.
The church served as a school for 175 years, after which it was left to its fate. For a number of years during the 19th century, it was used by the missionary movement. In 1922, the church underwent radical restoration, assuming its present appearance.
As a visitor, not only can you go into the church but also up to the top of the cut-off tower. The staircase up to the tower is narrow and dark, but well worth the effort. It is said that in fine weather you can see four of Sweden’s provinces – Småland, Östergötland, Närke and Västergötland – from the top. - in: https://jkpg.com
By Martinha at 22:50 No comments:

One more card on which the ID doesn't match with the image. The card is an official from Switzerland but the castle is located in Ireland. 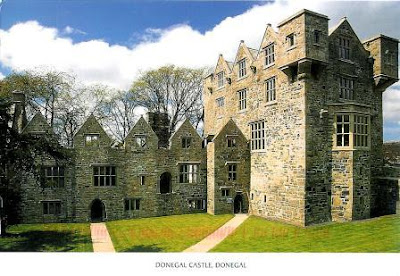 CH-508519, sent by Marta.
In the very heart of the county town, towering over the River Eske, stands Donegal Castle. Red Hugh O’Donnell himself built it as his personal fortress in the fifteenth century. It is said that, leaving to seek succour in Spain in the wake of the Battle of Kinsale, Hugh determined to make sure his castle would never ever fall into English hands – by setting it on fire.
But he was to be disappointed. English captain Sir Basil Brooke became the castle’s new lord in 1616. As part of a massive programme of improvements, Brooke built a handsome manor house beside the tower. He also commissioned the magnificent chimney-piece, finely decorated with carved fruit and his own imperious coat of arms.
The building complex fell into ruin in the twentieth century, but was brought back to its former glory in the 1990s. Currently, a suite of information panels illuminates the chequered history of the castle and its disparate owners. . in: https://heritageireland.ie
By Martinha at 22:32 No comments:

Another official sent from Germany but the lighthouse on the card is from Denmark. 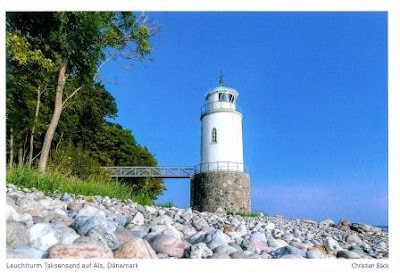 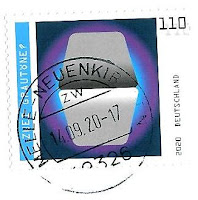 DE-9598252, sent by Anke.
Taksensand lighthouse is located on the small island of Als in Denmark.
It stands on the water´s edge and its boulder foundation looks beautiful together with the stony seach.
The lighthouse was built in 1905 and was originally 32 metres high.
In 1953 the lighthous was reduced in hight to 19 metres. - in: https://www.visitsonderborg.com
By Martinha at 00:23 No comments:

Some of the last german official cards I've received recently. 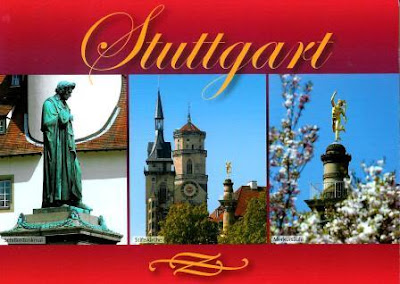 DE-9613692, sent by Kati.
In the vine-decked Neckar Valley, Stuttgart is the capital of the state of Baden-Württemberg. For hundreds of years until the 19th century the city was the seat of the Counts and then the Kings of Württemberg, and they left behind royal palaces for that have become government buildings and museums. - in: https://www.thecrazytourist.com 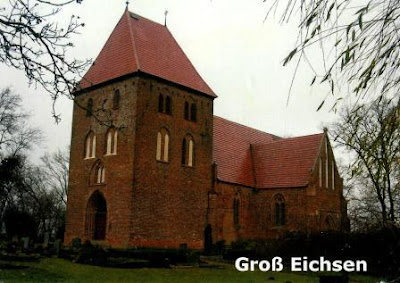 DE-9602054, sent by Detlef.
St. John's Church in Groß Eichsen, a district of Mühlen Eichsen, is one of the larger village churches in the Mecklenburg parish of the Evangelical Lutheran Church in Northern Germany. It is located on the northeastern edge of the village near the shore of the Groß Eichsener Lake. 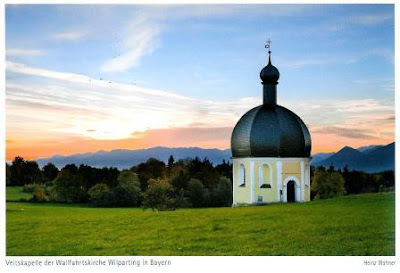 DE-9597386, sent by Holger.
The building on the card is St. Vitus' chape, part of the Pilgrimage Church of St. Marinus and Anian, in the village of Wilparting, Bavaria. The small chapel marks the place where the cell of Saints Marinus and Anianus is said to have been located. 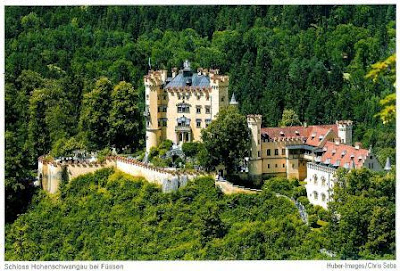 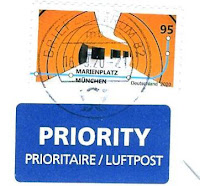 DE-9611787, sent by Becky.
Hohenschwangau Castle, may be best known as the castle next to the world-famous Neuschwanstein Castle, but it has a unique and vibrant history all of its own.
Hohenschwangau had its beginnings in the 12th century as the fortress Schwanstein. The family of knights who had founded the fortress died out by the 16th century. From this time until the 19th century, the fortress changed hands numerous times and, predictably, fell into ruins.
However, in April of 1829, a young crown prince went on a walking tour and discovered the remains of this once-proud castle. This was, of course, the future King Maximillian II of Bavaria, father to Ludwig, who would be best-known for his own series of fantastical castles. Maximillian gained possession of the ruins in 1832 and one year later had set about restoring it to its former greatness.
Maximillian worked on the castle with the help of his architect, Domenico Quaglio (and others following Quaglio’s death) to bring new life to the ruin and create the glorious Hohenschwangau.
Hohenschwangau became the summer residence for the King, his wife Marie of Prussia and their two sons, Ludwig and Otto. When the king died in 1864, Ludwig took up residence in his childhood home, where he also oversaw the construction of his own castle, Neuschwanstein, just across the way.
Ludwig died mysteriously in 1886, leaving his mother Marie as the only resident in the vast palace. The Queen’s brother-in-law, Luitpold, was next to live within Hohenschwangau. After installing electricity and an elevator, he died in 1912 and one year later, Hohenschwangau became a museum open to the public.
Miraculously, it suffered no damage during either of the world wars and remains in pristine condition. Each year, more than 300,000 guests come to experience the glory and fantasy of this Bavarian masterpiece. - in: https://www.mygermancity.com
By Martinha at 00:28 No comments:

Just like the Memorial Church, the Brandenburg Gate is also a symbol for peace, unity and reconciliation in Berlin.

The Brandenburg Gate is one of Berlin's most important monuments – a landmark and symbol all in one with over two hundred years of history. A former symbol of the divided city, it drew visitors who used to climb an observation platform in order to get a glimpse of the world behind the Iron Curtain, on the other side of the barren "death-strip" which separated East from West Berlin, geographically and politically. 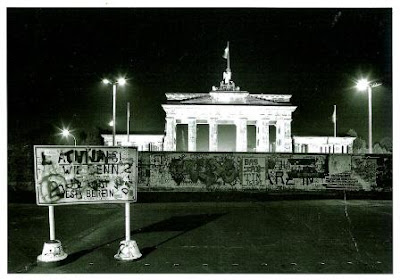 Foto: Berlin Nr. B. 92 - © Ute + Bernd
DE-9680830, sent by Ipek
It was here that on June 12, 1987, Ronald Regan issued his stern command to his cold war adversary admonishing him with the words: "Mr. Gorbachov – tear down this wall!". The speech delivered to West Berliners was also audible on the east side of the Gate and echoed President von Weizsacker’s words which translate as: "The German question is open as long as the Brandenburg Gate is closed." 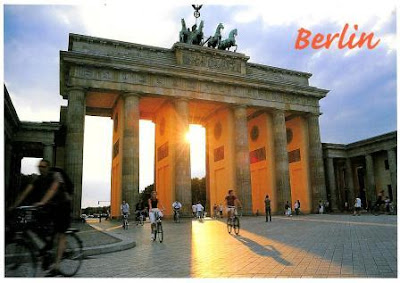 DE-814052, sent by Gabriela.
When Germany was reunified following the fall of the Berlin in November 1989 Brandenburg Gate quickly reinvented itself into the New Berlin's symbol of unity. It was officially opened to traffic on December 22, 1989 and 100,000 people came to celebrate the occasion. Unfortunately this also resulted in severe damage to the monument which needed to be restored and was only officially reopened on October 3, 2002. 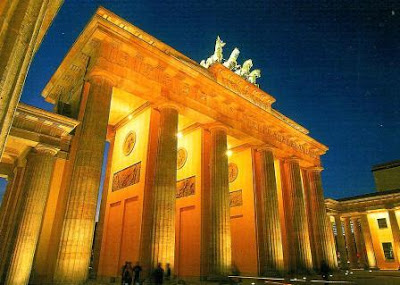 DE-1872833, sent by Silke.
The Brandenburg Gate was erected between 1788 and 1791 according to designs by Carl Gotthard Langhans whose vision was inspired by the Propylaea in Athens' Acropolis. Prussian sovereign Friedrich Wilhelm II was looking for a suitable architectural statement to enhance the approach into the Boulevard Unter den Linden. The classical sandstone work is one of the masterpieces of this era and is the only surviving one of 18 previous city portals. The Quadriga, a sculpture representing the Goddess of Victory, by Johann Gottfried Schadow which can be spotted from a long distance was erected on the Gate in 1793. From 1806 to 1814 the statue was held captive in France as a Napoleonic trophy during the years of France and Prussia's military rivalry for imperial domination. During WWII Brandenburg Gate was damaged but not destroyed by allied bombing. - in: https://www.berlin.de/en/attractions-and-sights/3560266-3104052-brandenburg-gate.en.html
By Martinha at 23:42 No comments:

Officials from Germany, both showing St. Sebastian Church in Ramsau. 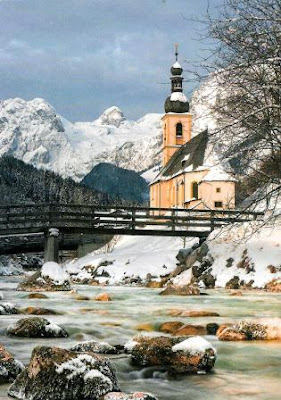 DE-9656453, sent by Dorle.
A lovely snowy view card from Ramsau in the Bavarian Alps, located in the district of Berchtesgadener Land in Bavaria, close to the border with Austria. The church of Ramsau, parish church of Saint Sebastian, is often on postcards and looking at these cards I can understand why. 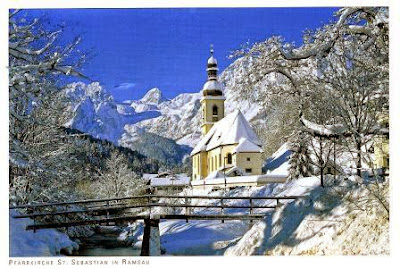 DE-3385458, sent by Karin.
The church is consecrated to the saints Sebastian and Fabian. It was built in 1512 under provost Gregor Rainer and was extended in 1692 in the baroque style. It has a tower with baroque onion shaped tower which is covered like the whole church with wooden shingles. - in: http://www.berchtesgaden-online.com
By Martinha at 23:41 No comments: