Not many cities in the world can brag about being on the UNESCO World Heritage List twice. Many places in the city centre of Weimar, a city located in Central Germany, have been designated as WHS, either as part of the Weimar Classicism complex or as part of the Bauhaus complex. 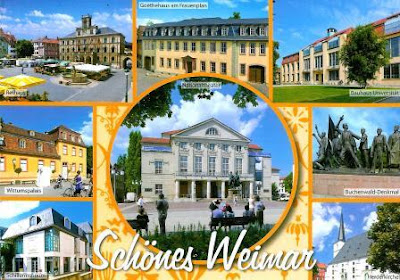 DE-8958516, sent by Conny.
Although it only lasted around 50 years, Weimar Classicism was one of the greatest eras in European intellectual history. It all began with Duchess Anna Amalia, who drew the great poets and philosophers to the small town despite its distance from the seats of power. Their fame is still associated with Weimar today. Reminders of Classical Weimar include the places where the writers and their patrons lived and worked – the houses of Goethe and Schiller, Belvedere Palace, Ettersburg Palace and Tiefurt House with their fabulous parks, sites associated with Herder, Wittums Palace, where the illustrious round table assembled, the renowned Duchess Anna Amalia Library and the historical cemetery with its royal crypt, where you can see the tombs of Goethe and Schiller. The adoption of Classical Weimar as a UNESCO World Heritage site was based both on the art-historical significance of the town's buildings and parks from the cultural flowering of the Classical Weimar period and on the role of the town as an intellectual centre in the late 18th and early 19th centuries. For all these reasons and more, Weimar was one of the European Capitals of Culture in 1999.
Another great epoch that emerged and flourished in Weimar was the Bauhaus, one of the foremost movements in architecture and design of the 20th century and regarded by many as Germany's most significant export at that time. The Bauhaus museum's 300 plus exhibits provide an insight into the work of the State Bauhaus, whose creations have lost nothing of their timeless and simple beauty. - in: https://www.germany.travel
By Martinha at 21:19