I've been to Utrecht last year but didn't see this mill, I didn't even know it existed. I should have received this card in the beginning of last year. 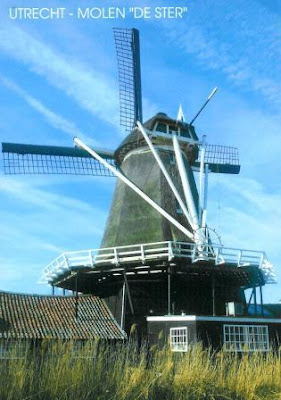 The De Ster (the star) sawmill, in Utrecht’s Lombok district, is the last fully-intact mill of its kind.
The De Ster sawmill was built in 1739 and was in use as a timber business for centuries. In 1991, wind power was replaced by electricity, and the windmill on the roof was demolished. When, in the 1980s, the sawing work permanently came to an end, new plans were made for the reconstruction of the mill.
More than ten years later, these plans came to fruition: in September 1998, the mill hull was put in place, and on 22 June 1999 the mill was officially opened. - in: https://www.visit-utrecht.com
By Martinha at 23:41