In November i've joined this travelling RR and hosted the group #23 for unesco cards. I've sent the envelope on November 17th with 10 cards and received the envelope back exactly 4 months later.
I've got 4 unesco cards from Brazil - Brasília, Historic Centre of the Town of Goiás and Iguaçu National Park; Portugal - Historic Centre of Porto and Alcobaça Monastery; France - Strasbourg - Grande Île; Poland - Centennial Hall in Wroclaw; Germany - Würzburg Residence with the Court Gardens and Residence Square.
I already had cards from all those places... 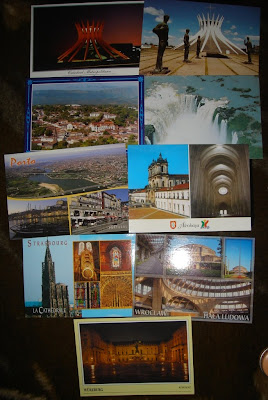 but one of the cards was from a new site, Durham Cathedral, included on the Unesco WHS since 1986. 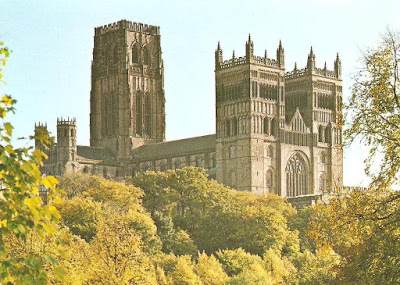 "The Cathedral Church of Christ, Blessed Mary the Virgin and St Cuthbert of Durham — known as Durham Cathedral — in the city of Durham, England, is the seat of the Anglican Bishop of Durham. The Bishopric dates from 995, with the present cathedral being founded in AD 1093. The cathedral is regarded as one of the finest examples of Normam architecture and has been designated a UNESCO World Heritage Site along with nearby Durham Castle.
The present cathedral replaces the 10th century "White Church" built as part of a monastic foundation to house the shrine of Saint Cuthbert of Lindisfarne. The treasures of Durham Cathedral include relics of St Cuthbert, the head of St Oswald of Northumbria and the remains of the Venerable Bede.
Durham Cathedral occupies a strategic position on a promontory high above the River Wear. From 1080 until the 19th century the bishopric enjoyed the powers of a Bishop Palatine, having military as well as religious leadership and power.
There are daily Church of England services at the Cathedral, with the Durham Cathedral Choir singing daily except Mondays and while the choir is in recess. The cathedral is a major tourist attraction within the region, the central tower of 217 feet (66 m) giving views of Durham and the sorrounding area." - in: wikipedia
By Martinha at 17:35