I've already received a lot of card this week and i still have updates from last week, fortunately, these are the last cards. Both are from Egypt, both new unesco whs and both sent by Claus, like the previous ones. 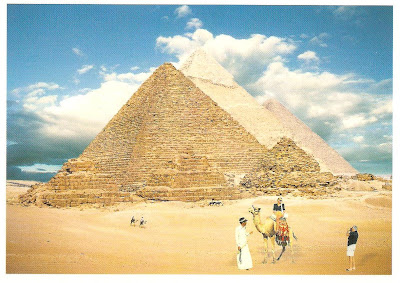 "The pyramids of Giza are perhaps the only true rival to the Great Sphinx when one thinks of ancient Egypt and its architecture. The Valley of Giza-- with its wonderful monuments-- is truly a marvel of architectural prowess. The three largest pyramids located in the valley consist of the Great Pyramid of Khufu, the Pyramid of Kafhre and the Pyramid of Menkaura. Each Pyramid is a tomb dedicated to a different king of Egypt.

All three pyramids were built during the Third and Fourth Dynasty; these structures resulted from a monumental effort by the king (and his sons). The Pyramid of Khufu has a base which covers roughly a nine acre area (approximately 392,040 square feet). The Pyramid of Menkaura, unlike the other pyramids, has granite covering one tier of its base. The Pyramid of Khafre had a two-tiered base encased in granite.

Unfortunately, like many of the great kings of the Old Kingdom of Egypt, the Pyramids of Menkaura, Khufu, and Kafhre were not finished by the end of each respective king's reign. As an example: in the case of Menkaura, the king died before its construction was completed. The monuments of Giza and the entire Giza Valley stand as a marvelous reminder of the skill executed in the creation of the pyramids, and are truly fabulous to see." - in: http://www.mnsu.edu/emuseum/prehistory/egypt/architecture/gizapyramids.html 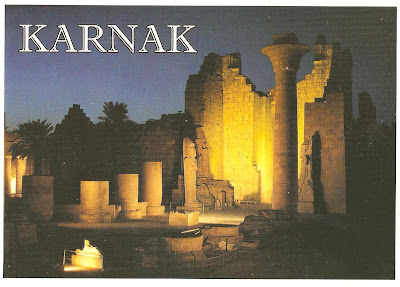 "The Karnak Temple Complex — usually called simply Karnak — comprises a vast conglomeration of ruined temples, chapels, pylons and other buildings, notably the Great Temple of Amen and a massive structure begun by Pharaoh Amenhotep III (ca. 1391-1351 BC). It is located near Luxor, some 500 km south of Cairo, in Egypt. The area around Karnak was the ancient Egyptian Ipet-isut ("The Most Selected of Places") and the main place of worship of the Theban Triad with the god Amun as its head. It is part of the monumental city of Thebes. The Karnak complex takes its name from the nearby (and partly surrounded) modern village of el-Karnak, some 2.5 km north of Luxor". - in: wikipedia

The statue of the Great sphinx of Giza is crumbling today because of the wind, humidity and the smog from Cairo. Attempts to restore it have often caused more harm than good.