I'm showing these 2 cards from the Terra Nostra Park, in S. Miguel Azores. I've received the 1st one this week, sent by Lurdes and i've got the 2nd one a few years ago when my cousins return from the Azores where they spent their honey moon.
"Terra Nostra Park, is a 32 acre public garden in the parish of Furnas, smack in the middle of the village.
The park was the brainchild of Thomas Hickling an orange grower and merchant from Boston and for awhile the US consul to the Azores, based in São Miguel. In 1780 Thomas Hickling built a small wooden house in five acres of land.
By mid-19th century, the property was owned by the Viscount of Praia. The Viscount and the Viscondessa, a keen gardener, replaced the house with a larger mansion, added more land and created formal gardens with water steams, groves and meadows of trees, and flower beds. 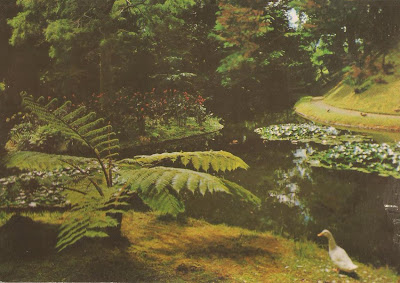 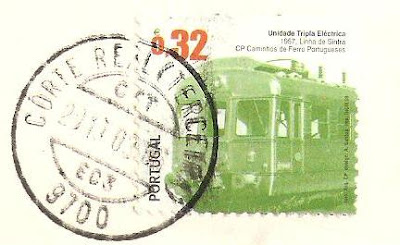 The son, the Viscount of Praia and Monforte, continued his father’s work with the help of Portuguese and Scottish garden designers. He further developed the park’s infrastructure to include lagoons. Trees were imported from all over the world, some of them still living. The oldest of the species are approaching 140 years old.

In 1930, the hotelier Vasco Bensaude acquired the garden after he built the Hotel Terra Nostra Garden. He hired John McEnroy of Scotland as head gardener and continued expanding and restoring the plant and flower collections. The brilliance of McEnroy put the finishing touches on an already good park to become a superb garden, known all over Europe and more recently starting to be discovered by the rest of the world. 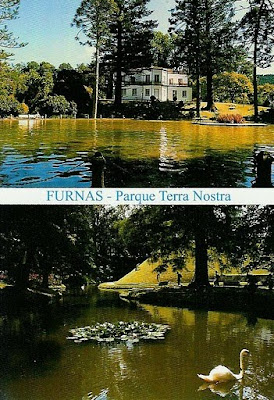 In 1990 Filipe Bensaude (Vasco’s son), oversaw yet another expansion and renovation of the gardens and the hotel, with English gardeners and a handful of tree surgeons. Local engineers rebuilt the canals and the tree surgeons worked on approximately 2,500 trees. New species of trees and plants were brought in including a collection of Rhododendrons, a Malesian native species of tropical mountains. Terra Nostra is the only garden in Europe that can grow these plants outdoors and unprotected. Most recently a garden of cycads, a fern garden and formal flower and plant gardens were added
Going to the Azores, or more specifically to São Miguel without visiting this garden is much like going to Rome and not visiting the Sistine Chapel." -in: http://portugal.com/blogs/visitazores/2009/01/15/terra-nostra-park/
By Martinha at 21:16