When I thanked Marcel for the Lower Germanic Limes card, I told him that I was only missing a card of the Danube Limes to have all the German sites. Knowing this, he kindly offered me a card of Porta Praetoria in Regensburg. I shouldn't have needed a swap to get this postcard, I've been to Regensburg, I've seen Porta Praetoria, I took pictures of it but didn't buy any cards of it. I don't know if I didn't see any cards or if I didn't find it interresting enough to buy cards. Now I've a card of it and cards of all the German UNESCO sites.
The German part of the Danube Limes consists of 24 locations between Eining near Regensburg and Passau near the Austrian border. The majority of the structures are preserved below ground, original remains are visible at Bad Gögging (thermal baths), Regensburg (Porta Praetoria, included in the WHS Old Town of Regensburg), and at the Roman Museum Boiotro in Passau. - in: https://www.worldheritagesite.org 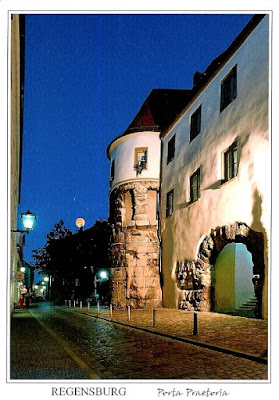 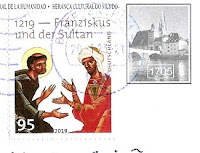 Coming into the city centre from the river, you can see Germany’s most ancient stone building, the Porta Praetoria, a gateway dating from 179 A. D. Giant blocks of stone were used to construct this gate in the northern wall of the Roman military camp. It survives as a reminder of Castra Regina, the Roman settlement. - in: https://tourismus.regensburg.de
By Martinha at 23:02 No comments:

These last days I've received more cards from new UNESCO sites than in the last 3 months.
The Limes are quite an headache, is not easy to get cards of this old roman border. I was lucky to tag Marcel who sent me this card with a matching stamp.
The Lower Germanic Limes was an important border section of the Roman Empire. It followed the ancient course of the Rhine and extended for about 400 kilometres between Katwijk (NL) on the North Sea to Bad Breisig in Rhineland-Palatinate. 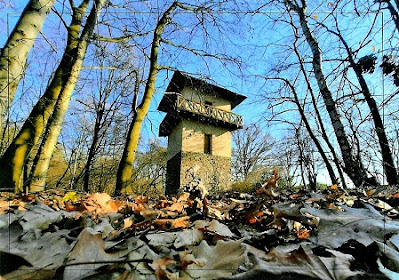 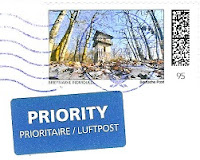 The archaeological sites of the Lower Germanic Limes illustrate in a special way the development of a border of the Roman Empire as well as the life and cultural exchange in its surroundings. Because of their outstanding universal value, UNESCO has recognized a representative selection of 44 archaeological sites on the Lower Germanic Limes as a World Heritage Site in July 2021. A total of 24 of these sites are located on German territory, distributed among 19 municipalities in North Rhine-Westphalia and one in Rhineland-Palatinate. - in: https://www.roemer.nrw
The remains of a Roman castellum, settlement and cemetery were discovered on Reckberg hill in Neuss. The castellum and settlement were most likely built in the 1rst century.
Today, the remains of the three parts of the archaeological site are preserved beneath the ground. The tower of the castellum was reconstructed in 1991.

I've been to Spain a lot of times, visited many places but I haven't been to Seville yet. It's on my list though. Joana and Miguel have already been there. Joana attended a Postcrossing meeting in the city in 2007 and Miguel visited it last month.
Among all the historic buildings that Seville treasures, the Cathedral and Giralda are two of the buildings that you cannot miss.The Cathedral, including the Giralda, was registered in 1987 as a World Heritage Site by UNESCO, along with the Alcázar and the General Archive of the Indies.
The Cathedral of Seville, also known as the Cathedral of St. Mary of the See, it is the largest Gothic cathedral in the world and the third Christian temple after St. Peter’s in Rome and St. Paul’s in London. Since the conquest of the city, on November 23, 1248, the building of the aljama, or the Almohad Mosque, was converted into the cathedral of the archdiocese of the Kingdom of Seville.
The construction changed the liturgical orientation of the mosque, which was towards the south, for the Christian orientation towards the east, placing the Main Chapel on the east side. With the passage of time, the walls, facades and pillars were covered with altarpieces and paintings. At the end of the fourteenth century, the mosque was badly damaged, at risk of ruin. The cathedral Cabildo decided to demolish the Almohade building to build a Christian cathedral. Its construction was carried out in several phases over more than 500 years, resulting in a mixture of several architectural styles that provide its special beauty. 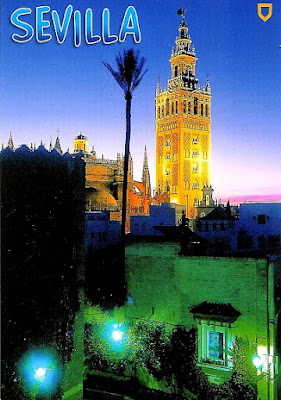 The Giralda is the bell tower of the Cathedral. It its day, it was the tallest tower in the world, standing at 97.5 m in height, in addition to being one of the most famous images of the city and Andalusia. The tower consists of two different but perfectly unified pieces, a perfect example of the crucible of cultures existing in the city.
The Muslim body is the oldest part, started in 1184 by order of Abu Yaqub Yusuf to be the minaret of the Almohad mosque of Seville. A curious fact, the Giralda does not have stairs, but instead has 35 ramps wide enough to allow the Sultan to ascend mounted on horseback to see the beautiful view.
In the 17th century, the current Christian part, the bell tower that tops the tower, was added by the architect Hernán Ruiz. The top of the tower is the “Lily section” which has four jars of bronze lilies, one on each corner. And above this, there is still another section in a more Renaissance style. - in: https://www.visitasevilla.es
By Martinha at 22:17 No comments:

Santo Tirso is a city in northern Portugal.A few days ago when I received a card from there sent by Óscar, I thought I didn't have any cards from this city but I was wrong. In 2018 Inês had already sent me a card, also with the monastery. 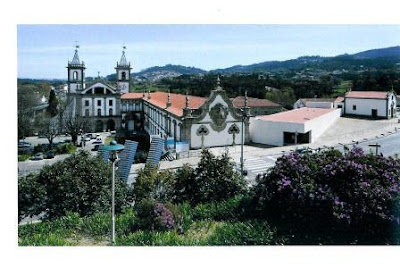 Santo Tirso Monastery, also known as Saint Benedict Monastery, is located on the left bank of the Ave river, in the lower part of the city of Santo Tirso. It was founded by Dª Unisco Godiniz and her husband Abunazar Lovesendes in 978.
In the 15th century, a monastic church was built on behalf of Martim Gil, Count of Barcelos. There are only some archaeological remains of this church. The present main church was built in 1659-79. 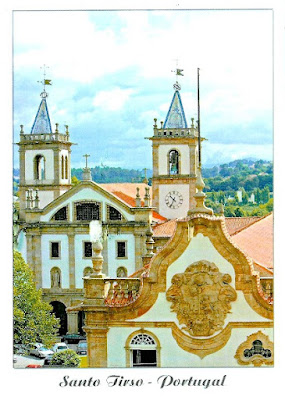 After secularization, the monastery was divided; one part was for private individuals, the other for public offices (Town Hall - in the old convent inns, the Court and Administration of the county) and an Agricultural Asylum, and one last part for parish residence.
The monastery has been classified as a National Monument since 1910.
By Martinha at 00:03 No comments:

When I visit a place, I like to stop by the local tourism office, not only to ask for information about the place but also to look for postcards. Sometimes, they have nice cards, usually not available in the local shops, and in Castelo Branco tourism office, cards are not only nice but also for free. I haven't been to this office yet but I have a few postcards that some people brought from there. In November Telma visited the city and sent me this postcard. I'm not a fan of this size but the image is beautiful. 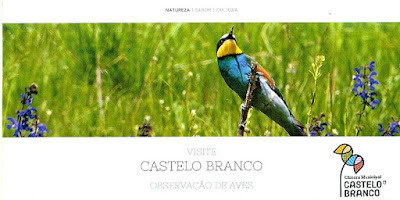 I know anything about birds, I had to ask google to identify the creature. This colorful little bird is a european bee-eater. It is a medium-sized, richly colored land bird. Its most characteristic features are the yellow throat, the bluish chest and belly, the red back and the black mask.
It breeds in southern and central Europe, northern and southern Africa, and western Asia.
These bee-eaters are gregarious—nesting colonially in sandy banks, preferably near river shores, usually at the beginning of May. They make a relatively long tunnel, in which they lay five to eight spherical white eggs around the beginning of June. Both male and female care for the eggs, which they brood for about three weeks.
This bird breeds in open country in warmer climates. As the name suggests, bee-eaters predominantly eat insects, especially bees, wasps, and hornets. They catch insects in flight, in sorties from an open perch. Before eating a bee, the European bee-eater removes the sting by repeatedly hitting the insect on a hard surface. It can eat around 250 bees a day. - in: wikipedia
By Martinha at 23:43 No comments:

The Portuguese postcrossers started to celebrate Christmas a month before the date. This year they headed south. I think I wasn't working the day of the meeting but Faro is way too far for me, I stayed home and received postcards from Tiago and Vitória. 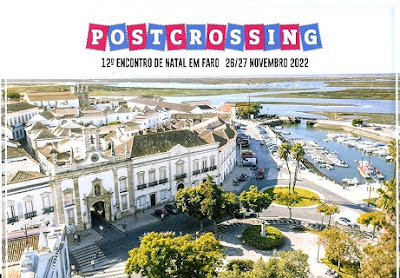 Capital of the Algarve since 1756, Faro is the gateway for those arriving by plane to the south of Portugal. The Manuel Bívar Garden, overlooking the marina, the Ria Formosa and the sea, is where everything happens. 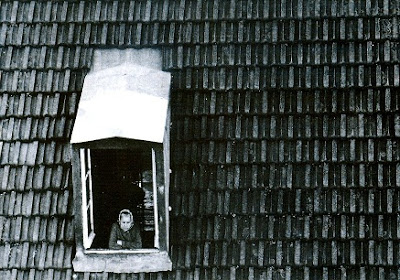 If we zoom in on the rooftops of the city's historic area, we might find the old lady on this postcard.
By Martinha at 23:59 No comments:

Lets continue with RR postcards but these are from the RR in Portuguese. These are all from Portugal and were sent by Nídia, Pedro and Rui. 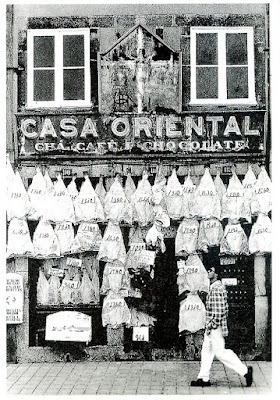 The photo on this postcard is 31 years old and since 1992, a lot has changed in Casa Oriental, starting with the codfish, which are no longer hanging in front of the house.
Casa Oriental, next to Clérigos Tower in Porto, was founded in 1910 and began by selling products from the eastern and African colonies. After the 2nd World War, the range of products increased and Casa Oriental began to sell Portuguese regional products: confectionery, sausages and smoked meats, fruits, vegetables, cheeses, olives, wines and liquors. It was after the 25th of April 1974 that cod became the hallmark of the house.
Currently associated with Comur, Casa Oriental now offers around thirty varieties of preserves, in lithographed tins with illustrations that highlight some events of the last century.
I must confess that I am not a fan of this transformation, I liked the old grocery store better. 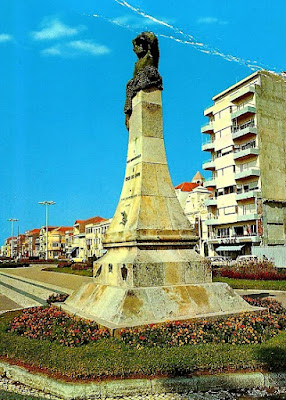 The first time I went to Póvoa de Varzim, my friend Isa showed me this statue and I suppose she told to me who Cego do Maio was. If she did, I completely forgot who he was and why he had a statue dedicated to him.
José Rodrigues Maio, better known as Cego do Maio, was a 19th-century local fisherman and lifeguard. A hero, for many, even for King D. Luís I, who decorated him for the lives he saved in the sea of Póvoa de Varzim. 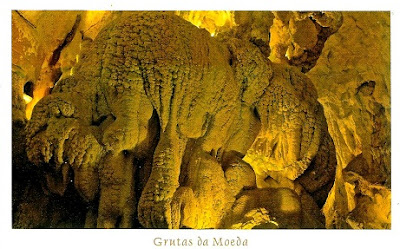 Grutas da Moeda, Coin Cave, is one of the many caves near Fátima.
Its discovery took place in 1971, by two hunters who were chasing a fox that had taken refuge in an sinkhole that existed in the middle of the forest. Moved by curiosity, they entered and discovered its natural beauty, with galleries filled with countless limestone formations. Names were given to each of the rooms and galleries, suggesting different images. This one on the card is the Shepherd Chamber.
The visitable extension of the Grotto is 350 meters and its depth is 45 m below the entrance level. The temperature is around 18º C, remaining constant all year. - in: https://www.grutasmoeda.com
By Martinha at 23:18 No comments: