In the beginning of this month, Joaninha went on holidays to Belgium with Tânia. They both stayed with Raquel, the official host and guide of every portuguese postcrossers that visit Belgium. I've also stayed with her when I traveled to Belgium and I know they all had a great time together. That also included signing and sending a few cards. 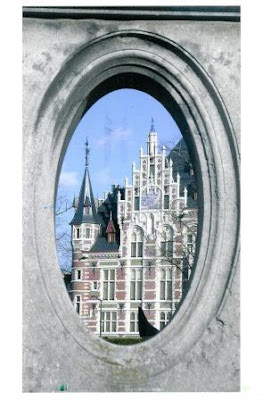 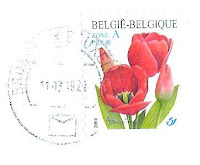 It is Paul Saintenoy who, in 1898, realized this magnificent Neo-Gothic, Neo-Renaissance building for the pharmacist Charles Delacre. This former pharmacy has now turned into an art gallery which fully respects its magnificent interior architecture.
You can also admire its woodwork and splendid raised floor. It should be noted that the same architect also built the Old England, located a few meters further up, which now houses the Museum of Musical Instruments.
The story of Charles Delacre, former occupant of the Delacre pharmacy, is quite incredible. Indeed, in 1870 this trained pharmacist began selling chocolate, which, at the time was considered a tonic and cure. The success was such that he decided to open a shop dedicated to chocolate, right next to the pharmacy. Only two years later the first Delacre factory opened. In 1879 the pharmacist officially becomes “Court Supplier” and in 1891 the first biscuit, Pacha Delacre, is put on the market.
120 years later, Delacre is number two on the European biscuits market. - in: https://www.bruxellesmabelle.net/en/lieux/ancienne-pharmacie-delacre/
By Martinha at 21:57 No comments:

Lighthouses are the landmarks of the North Sea coast. Some have been working on the coasts for over 100 years.
In addition to classic round towers with red and white horizontal stripes, there are unadorned steel structures and brick buildings with a square base. Modern technology has been replacing the lighthouse keeper for decades. The cone of light is activated in the present by pressing a button and no longer set in motion by hand.
Some lighthouses on the North Sea today have a dual function: they not only point the way to the harbor for sailors, but also serve as a registry office and escort couples in love into the port of marriage. 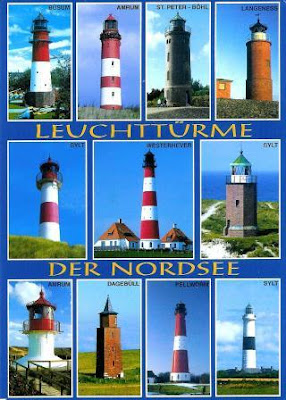 Three of these lights are on Sylt island, two in Amrum and the others in Büsum, St. Peter - Böhl, Langeness; Westerhever; Dagebüll and Pellworm.
By Martinha at 01:56 No comments:

In 12 years of Postcrossing this is my 14th official card from Italy. Only 14 officials from Italy!!! Coincidence or not, I've also sent 14 officials to Italy. 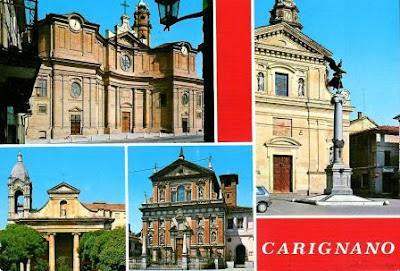 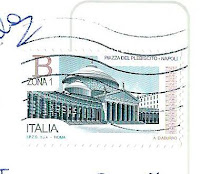 Carignano is a comune in the Metropolitan City of Turin in the Italian region Piedmont, located about 20 kilometres (12 mi) south of Turin. - in: wikipedia
These are the churches of St. John the Baptist and st. Remi; Church of Mercy and War Memorial; St. Remi Church and Holy Virgin of Graces Church.
By Martinha at 23:30 No comments:

To celebrate his wedding anniversary, father's day and St. Joseph feast, José hosted a lottery and I was one of the lucky winners. The prize was a Rialto Bridge card.
José's card is the 2nd one with the gondola and the 1st was bought my me, not sure whether it was in Venice or in Rome. 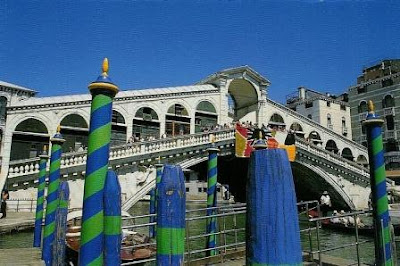 The Rialto Bridge is one of the four bridges spanning the Grand Canal. For nearly three hundred years, it was the only way to cross the Grand Canal on foot. The stone bridge, a single span designed by Antonio da Ponte, was completed in 1591 and was used to replace a wooden bridge that collapsed in 1524. 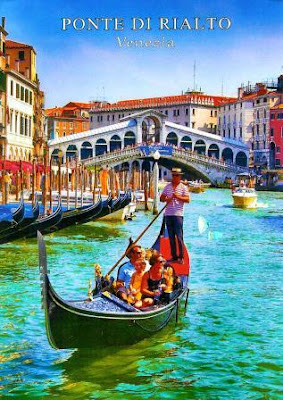 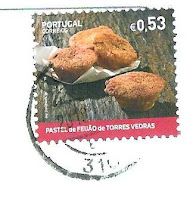 The engineering of the bridge was considered so audacious that some architects predicted a future collapse. The bridge has defied its critics to become one of the architectural icons of Venice. - in: https://www.touropia.com/tourist-attractions-in-venice/
By Martinha at 23:10 No comments:

It was not possible to Joana to organize the January surprise group of the Portuguese RR but last month she found some time to do it again. These cards are from France and Portugal and were sent by Joana, Ana, Liliana and Paulo. 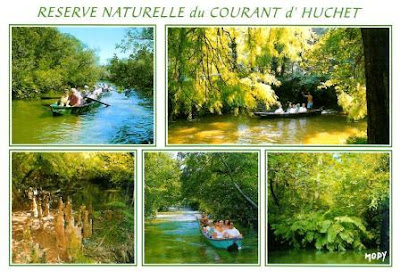 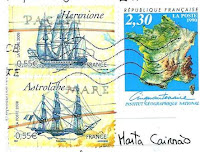 The current of Huchet is a coastal river on the communes of Léon, Vielle-Saint-Girons and Moliets-et-Maâ, in the French department of Landes. It is the outlet of the pond of Léon and flows into the Atlantic Ocean at the commune of Moliets-et-Maâ.
The Courant d'Huchet Nature Reserve was created in 1981 on an area of 617,942 ha. 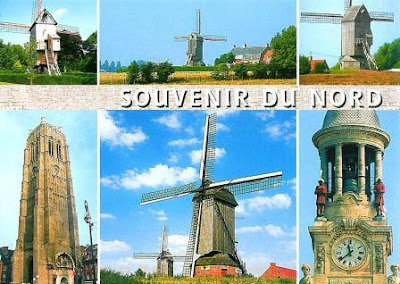 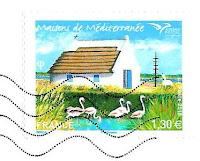 I wanted to identify these mills, but it's a complicated task. As for the towers, the one on the left is Dunkirk's belfry and no idea about the other one.
Most mills in north France are “post mills”, which have a large body - the “buck” - that can be turned round to make the sails face the wind. The body swivels on a massive pivot fixed in the ground - held steady by a tripod base, called a “trestle”. When the wind direction changes, the miller has to turn the mill round by pushing the tailpole - or he might get a horse to do the work.
Often the base is covered over to protect it from the weather and make an extra store room. - in: https://www.theotherside.co.uk/tm-heritage/background/mills.htm 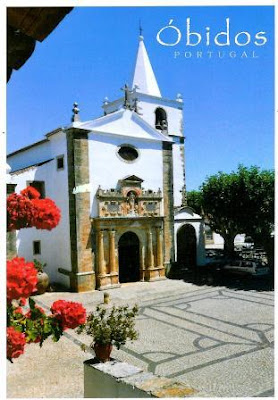 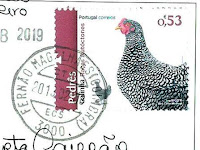 I need to go back to Óbidos. I've only been there twice and the last one was 9 years ago !! Back then the Church of Santa Maria wasn't looking this good and the weather wasn't that great either.
The temple that today sits in the Santa Maria Square, at the bottom of the Rua Direita main street, dates from the 16th century and was built by the initiative of Queen D. Leonor, wife of D. João II. It was in this church that, on August 15, 1441, the infant D. Afonso (later King D. Afonso V of Portugal) married his cousin D. Isabel, at the ages of ten and eight. - in: https://www.visitportugal.com/en/content/igreja-de-santa-maria-matriz-de-obidos 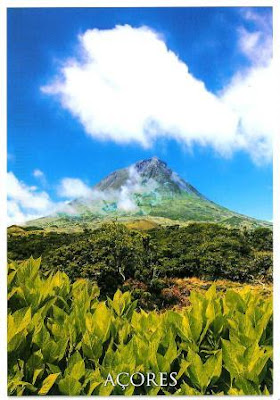 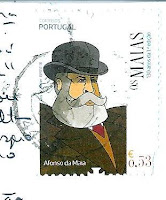 On my next trip to the Azores I want to visit (again) Faial and also Pico, where this card is from.
The immense volcanic cone of Pico Mountain, the third largest volcano in the Atlantic, imposes itself on the island’s landscape. Inside its main crater there is a cone of lava designated Piquinho, on top of which fumaroles permanently vent steam to remind us of its volcanic nature. At around 1250 metres above sea level, where the footpaths to the Mountain start to climb, you can get a view of much of the island, as well as the neighbouring Faial and São Jorge. The climb to the top is tiring, but rewarded by fantastic, unique panoramic views which, on a clear day, offer the additional reward of a glimpse of the islands of Graciosa and Terceira. - in: https://www.visitportugal.com/en/content/azores-pico
By Martinha at 23:57 No comments:

Last month I've got some nice cards from this RR. These are from Taiwan, Poland, Germany and Scotland. 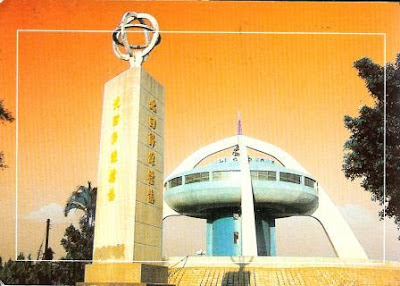 This space shuttle like building is the Solar Exploration Center in Shueishang Township, one of the three Tropic of Cancer Marker in Taiwan.
The Tropic of Cancer, which is also referred to as the Northern Tropic, is the most northerly circle of latitude on Earth at which the Sun can be directly overhead. This occurs on the June solstice, when the Northern Hemisphere is tilted toward the Sun to its maximum extent. - in: wikipedia
The Tropic of Cancer passes through 17 countries.
Vicky used nice stamps to send the card, including a matching one. 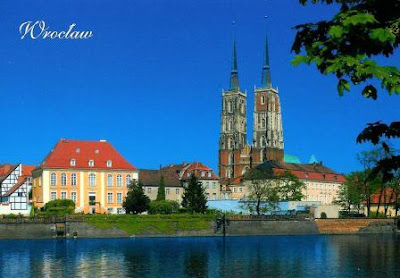 I've been to Poland once and this beautiful country is again my list as one of my options for this year's holidays. The idea is to go to southern Poland again and this time I'd like to visit Wroclaw.
On this card sent by Kamilla, we get a nice view of the Cathedral Island, the oldest part of the city. The yellow building is the Archbishop′s palace and next to it there's the Cathedral of St. John the Baptist. What we see today is in fact the fourth church to be built on this site. When construction began in 1244, this was the first brick building in Poland. Cathedral-building being what it is, work continued for five more centuries. - in: https://www.inyourpocket.com/wroclaw/cathedral-of-st-john-the-baptist_93619v 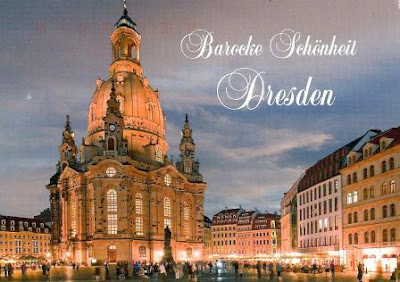 I've said many time and I'll say it again, Dresden is one of the german cities on the top of my must visit list. Thanks Anne for this beautiful card.
Built in the 18th century, the Dresden Frauenkirche was destroyed in the bombing of Dresden during World War II. The remaining ruins were left for 50 years as a war memorial, following decisions of local East German leaders. The church was rebuilt after the reunification of Germany, starting in 1994. The reconstruction of its exterior was completed in 2004, and the interior in 2005.
The surrounding Neumarkt square with its many valuable baroque buildings was also reconstructed in 2004. - in: wikipedia 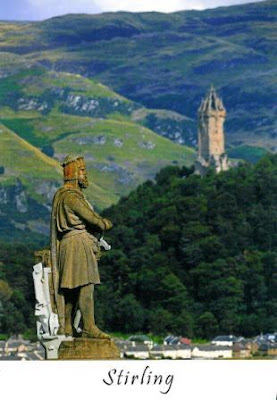 This is not a card from a place I'd like to visit, is a card from a place I've already been too. Sabine brought me back some nice memories with this card.
Robert the Bruce (11 July 1274 – 7 June 1329) was King of Scots from 1306 until his death in 1329. Robert was one of the most famous warriors of his generation, and eventually led Scotland during the First War of Scottish Independence against England. He fought successfully during his reign to regain Scotland's place as an independent country and is today revered in Scotland as a national hero. - in: wikipedia
This statue is located on Stirling Castle esplanade. In the background there's a monument to another national hero of Scotland. The National Wallace Monument commemorates Sir William Wallace.
By Martinha at 23:22 No comments: 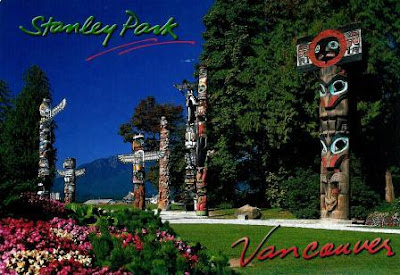 CA-884566, sent by Heidi.
Ideally situated on a peninsula at the northwestern edge of downtown Vancouver, Stanley Park is one of the city's main tourist destinations, attracting approximately 8 million visitors each year.
One of Stanley Park's most fascinating attractions, not to mention one of the most-visited tourist attractions in British Columbia, is the famous totem pole display at Brockton Point. Begun in the early 1920s with just four totems from Vancouver Island's Alert Bay region, the display grew over the decades to include totems from Haida Gwaii (previously known as the Queen Charlotte Islands) and Rivers Inlet (on British Columbia's central coast). Some of the original totem poles were carved as early as the late 1880s and have since been sent to museums for preservation; others were commissioned or loaned to the park between 1986 and 2009. - in: https://www.tourismvancouver.com/activities/stanley-park/sightseeing-spots/ 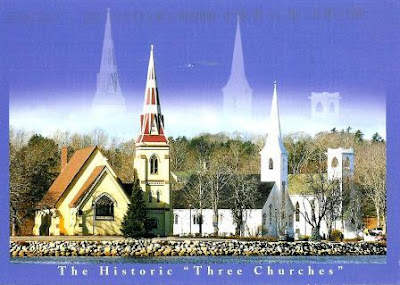 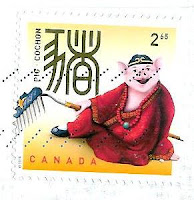 One of the most iconic views in Nova Scotia is the Three Churches, located in the picturesque seaside community of Mahone Bay.
St. James Anglican Church, on the left, was built in 1887 in High Victorian Gothic Revival style. The lighted steeple of St. James, a beacon for returning seafarers, can be seen from the entrance to Mahone Bay Harbour.
St. John's Lutheran Church (the middle church) was organized in 1864. The existing building dates from 1903.
Trinity United Church was built in 1861 behind the present location. In 1885 it was moved by teams of oxen to Edgewater Drive. - in: http://www.threechurches.com/venues.html
By Martinha at 23:47 No comments:

Cards from Harrisburg, the capital city of Pennsylvania state. 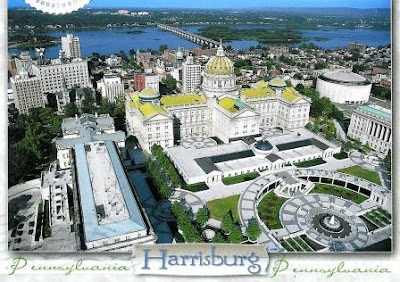 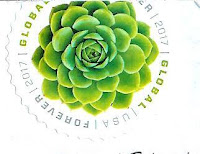 US-5820172, sent by Bernardette.
The Pennsylvania State Capitol Complex is a large complex of state government buildings in Harrisburg, Pennsylvania. Set on more than 50 acres (20 ha) of downtown Harrisburg, it includes the Pennsylvania State Capitol and a landscaped park environment with monuments, memorials, and other government buildings.
Most of this area (bounded on the north by North Street) is a National Historic Landmark District, recognized in 2013 as a fully realized example of the City Beautiful movement landscape and planning design of Arnold Brunner. 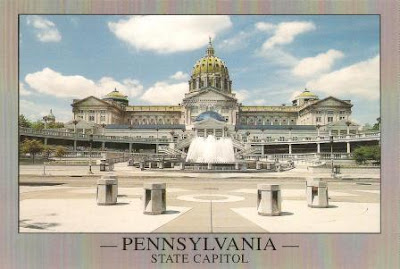 The Pennsylvania State Capitol is the seat of government for the U.S. state of Pennsylvania. It was designed by architect, Joseph Miller Huston in 1902 and completed 1906 in a Beaux-Arts style with decorative Renaissance themes throughout. The capitol houses the legislative chambers for the Pennsylvania General Assembly, made up of the House of Representatives and the Senate, and the Harrisburg chambers for the Supreme and Superior Courts of Pennsylvania, as well as the offices of the Governor and the Lieutenant Governor. - in: wikipedia
By Martinha at 23:33 No comments: