Vera sent me this postcard to inaugurate my new address and leave an important message.
Every year, more than 50 million animals (foxes, chinchillas, ferrets, rabbits, seals, dogs and cats, among others) are killed for their fur, exclusively to satisfy human vanity. We can contribute to the end of this barbaric industry by choosing skinless items whenever we buy clothing, fashion accessories or footwear. 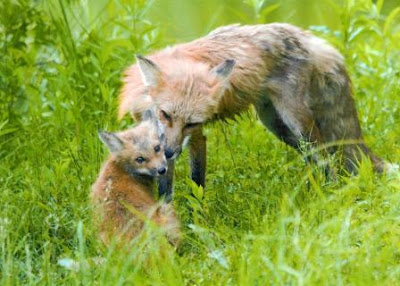 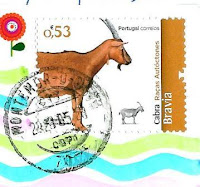 The fox is the most widely distributed carnivore in the world. Alongside this, it is also the most bred species in captivity worldwide for fur production, along with the American vision. However, in 1992-93 the fox, caught in the wild, was still the third most commercially important type of fur in North America.
By Martinha at 22:47 No comments:

From Montana to Florida with cards from Fort Lauderdale. 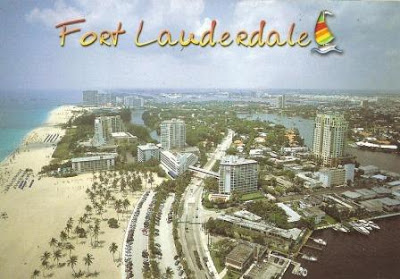 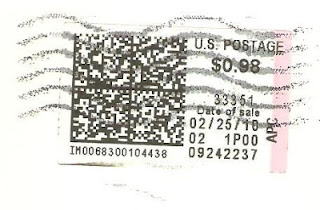 US-599152, sent by Ashley.
The city is a popular tourist destination, with 10.35 million visitors in 2006. Fort Lauderdale is sometimes known as the "Venice of America" because of its expansive and intricate canal system. The city is a major yachting center, with 42,000 resident yachts and 100 marinas and boatyards. The city sits 23 miles north of Miami, Florida. Fort Lauderdale and the surrounding area host over 4100 restaurants and 120 nightclubs. 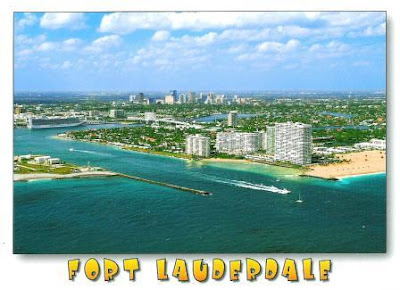 © Scenic Florida Distributors
Fort Lauderdale is named after a series of forts built by the United States during the Second Seminole War. The forts took their name from Major William Lauderdale, who was the commander of the detachment of soldiers who built the first fort. However, development of the city did not begin until 50 years after the forts were abandoned at the end of the conflict. Three forts named "Fort Lauderdale" were constructed; the first was at the fork of the New River, the second at Tarpon Bend, in what is now known as the Sailboat Bend neighborhood, and the third near the site of the Bahia Mar Marina." - in: wikipedia
This card, send by Katelin, shows Port Everglades, is the gateway for international trade and cruise vacations. Already one of the three busiest cruise ports worldwide, Port Everglades is also one of Florida's leading container ports.
By Martinha at 22:42 No comments:

The places that attracts me the most in USA are the national parks, I think I'd like to visit them all. To visit Glacier National Park, I'd have to go to Montana.
Both these cards were sent by Carol 10 years ago. 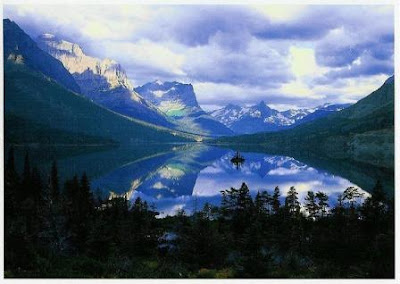 "Glacier National Park is located in the U.S. state of Montana, bordering the Canadian provinces of Alberta and British Columbia. Glacier National Park contains two mountain ranges, sometimes referred to as the southern extension of the Canadian Rockies mountain ranges, with over 130 named lakes, more than 1,000 different species of plants and hundreds of species of animals.
Glacier National Park borders Waterton Lakes National Park in Canada—the two parks are known as the Waterton-Glacier International Peace Park, and were designated as the world's first International Peace Park in 1932. Both parks were designated by the United Nations as Biosphere Reserves in 1976, and in 1995 as World Heritage sites." - in: wikipedia 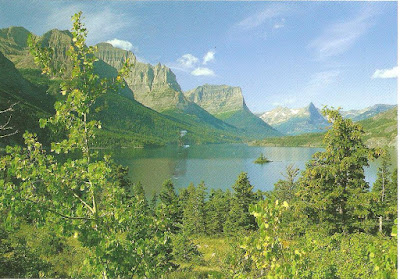 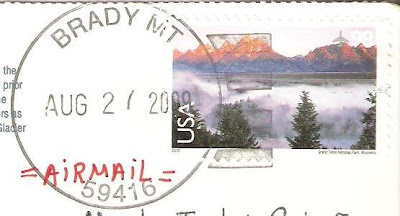 "St. Mary Lake is the second largest lake in Glacier National Park, Montana, created by a widening of the St. Mary River.
Located on the east side of the park, the Going-to-the-Sun Road parallels the lake along its north shore. At an altitude of 4,484 feet (1,367 m), St. Mary Lake's waters are colder and lie almost 1,500 feet (460 m) higher in altitude than Lake McDonald, the largest lake in the park, which is located on the west side of the Continental Divide. Here, the great plains end and the Rocky Mountains begin in an abrupt five thousand foot (1,500 m) altitude change, with Little Chief Mountain posing a formidable southern flank above the west end of the lake. St. Mary lake has a surface area of 3,923 acres (15.88 km2).
The lake is 9.9 miles (15.9 km) long and three hundred feet (100 m) deep. The waters of the lake rarely rise above 50 °F (10 °C) and is home to various species of trout. During the winter, the lake often is frozen completely over with ice up to four feet (1 m) thick."
By Martinha at 10:09 1 comment:

The Great Smoky Mountains National Park is the most popular National Park in the country and hosts well over ten-million annual visitors. It gets more annual visitors than the Grand Canyon, Yosemite, and Yellowstone combined. This beautiful mountain range reaches towering heights of nearly seven-thousand feet, but is famous for its magical, smoky haze. - in: https://smokymountains.com/park/ 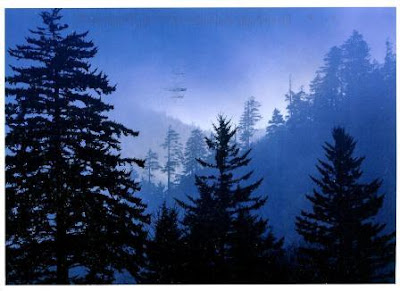 US-6622489, sent by Ree.
Great Smoky Mountains National Park is a United States National Park that straddles the ridgeline of the Great Smoky Mountains, part of the Blue Ridge Mountains, which are a division of the larger Appalachian Mountain chain. The border between Tennessee and North Carolina runs northeast to southwest through the centerline of the park. It is the most visited national park in the United States. The park was chartered by the United States Congress in 1934 and officially dedicated by President Franklin Delano Roosevelt in 1940.
The park was designated an International Biosphere Reserve in 1976, was certified as a UNESCO World Heritage Site in 1983." - in: wikipedia 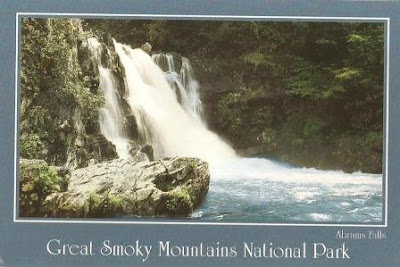 On this cards there's the Abrams Falls, one of the best trout streams in the Great Smoky Mountains. It was named after a Cherokee Indian Chief. 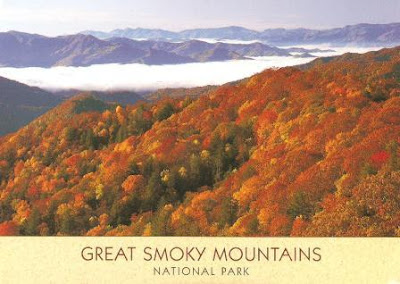 US-803377, sent by Renae.
On the back of the card: "Autumns colors reach their peak October 15-31 in the Smokies. By mid-September the foliage starts to change in the northern hardwood forest above 4500 feet before spreading into the hardwoods in lower elevations. Reds generally are red maple, pin cherry and mountain ash; yellows are American beech, yellow birch and yellow buckeye."

Did you know?
The majority of trees in the park are deciduous which make for an amazing show of color in the fall.
The last three weeks of October attract large number of sightseers for the fall color display.
Colors begin to change in higher elevations first and travel down the mountains to the lower elevations, making "peak" season difficult to predict with precision.
Fall color in the park's lower elevations is most spectacular; it includes sugar maple, scarlet oak, sweetgum, red mapleand hickories.
By Martinha at 23:29 No comments:

I'm ok, don't worry!! It has been more than a month since my last post and that was mainly because I was too busy with work, moving to a new house and lack of cards. Due to the corona virus I had a different schedule at work and when I got home was already too late and I was too tired to make any updates. Almost 2 weeks ago I moved to a new house, which kept me busy packing, unpacking and only got internet again yesterday.
I can only make updates if i've any cards to show and in the last weeks I didn't get many. Mail distribution is slow and weird all over the world. All of my cards now travel for more than a month, even to Europe!! I definitely miss the old days.
Cards, I'm here to write about cards. One of the last, if not the last, official that I got in my old address, was the multiview of Rabsztyn castle in Poland, one of the Eagle Nest Castles. 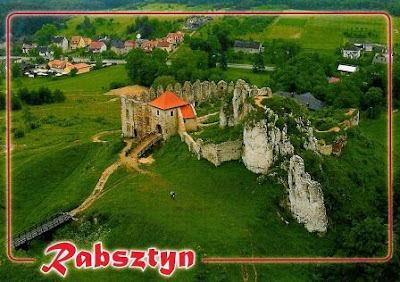 Photo by Krysztof Kaminski
Originally built by King Kazimierz to protect the money-making mining centre of nearby Olkusz, Rabsztyn actually consists of two separate castles – the original 14th century upper castle and the much-larger lower castle added at its foot in the 17th century in the Renaissance style. The Swedes saw to it that neither was inhabitable shortly thereafter during their 17th century invasion. Today there is almost nothing to see of the upper castle, in fact most won’t even be able to discern the remnants of its walls from the rock surrounding it. 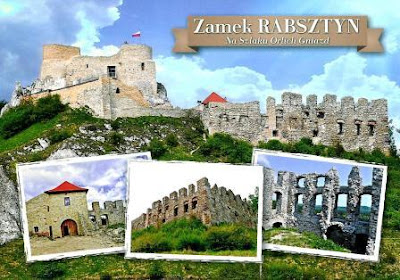 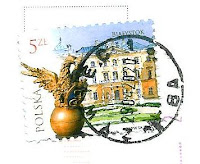 PL-1677448, sent by Zaneta.
The upper castle’s main feature was a cylindrical tower which irreverent fortuneseekers dynamited in the late 1800s. The walls of the lower castle still stand giving some indication of the size of this former strong-(but not strong enough)-hold, and recently the castle gate, several bridges and one of the towers was restored. Today it houses a small historical museum. - in: http://www.inyourpocket.com/poland
By Martinha at 23:09 No comments: