Niagara Falls is Canada's most famous natural attraction, bringing in millions of visitors each year. Even though this is Canada's most famous natural attraction, I only have these cards from there. The 1st card was sent to my grandma a few years ago, when my uncles visited our family in USA. The last one is and official and the other two were sent by Ara and Heidi. 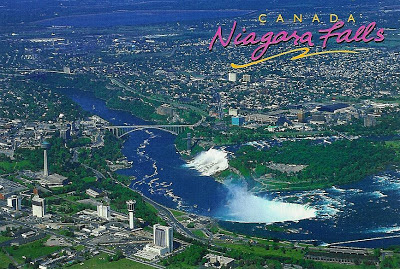 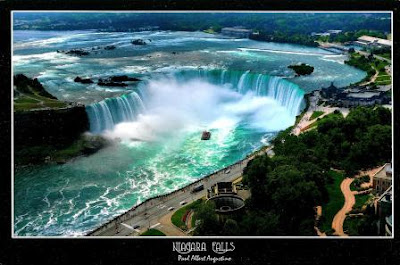 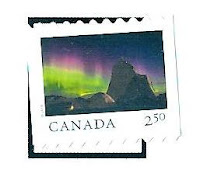 Located on the Niagara River, which drains Lake Erie into Lake Ontario, the combined falls form the highest flow rate of any waterfall in North America that has a vertical drop of more than 50 metres (160 ft). 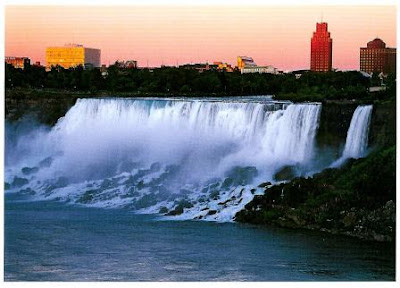 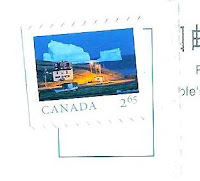 Niagara Falls was formed when glaciers receded at the end of the Wisconsin glaciation (the last ice age), and water from the newly formed Great Lakes carved a path through the Niagara Escarpment en route to the Atlantic Ocean. - in: wikipedia 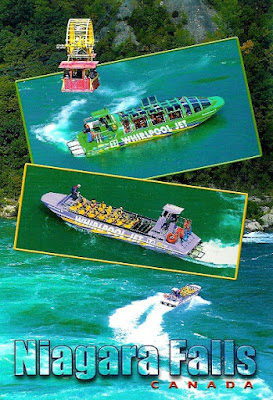 CA-1238097, sent by Beth.
The Jet Dome travels down the Niagara river and past 18 miles (28 kms) of exhilirating scenery to the churning white waters of the famous Niagara Whirlpool.
By Martinha at 21:39 No comments:

Leaving August behind already with a glimpse of autumn with this card from Canada.
This card depicts a sawmill at the Kings Landing open-air museum in New Brunswick.
The historical settlement of Kings Landing was never a “real” place. Rather, it was created in the 1970s as a “living history” museum covering the era between 1820 and 1920 in an area which was predominantly settled by Loyalists after the American Revolution. It has all the features one would expect in a living history museum: a blacksmith, a printshop, a general store, farms and livestock and plenty of characters in period costumes.
Most of the buildings found at Kings Landing are authentic period structures, however. They were relocated from nearby areas that were flooded after the construction of the massive Mactaquac Dam in 1968. 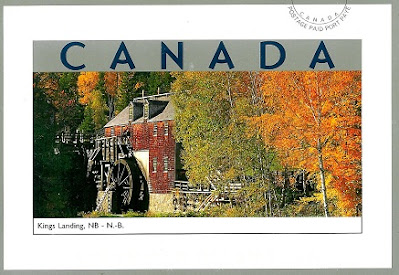 CA-1239374, sent by Christine.
One of the buildings that was not relocated but rather was built specifically for the park is the sawmill. Completed in the 1970s, it is meant to represent an 1830s-style wooden sawmill powered by a waterwheel. - in: https://www.waymarking.com
By Martinha at 21:27 No comments: 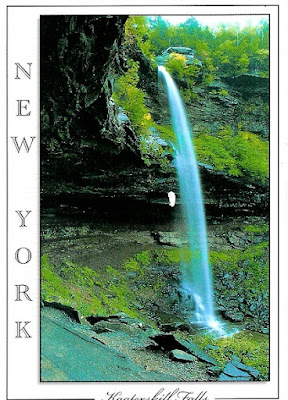 US-8604625, sent by Rosanne.
Kaaterskill Falls is a two-stage waterfall on Spruce Creek in the eastern Catskill Mountains of New York. The two cascades total 260 feet (79 m) in height, making Kaaterskill Falls one of the highest waterfalls in New York, and one of the Eastern United States' tallest waterfalls.
The waterfalls are one of America's oldest tourist attractions, being depicted or described by many books, essays, poems and paintings of the early 19th century.
Loved by locals and tourists alike, Kaaterskill falls is estimated to host well over 200,000 visitors each year. This landmark has been the epicenter of Catskills tourism since the early 1800s, thus Kaaterskill Falls is the most popular and highly visited destination in the Catskill Park Forest Preserve. 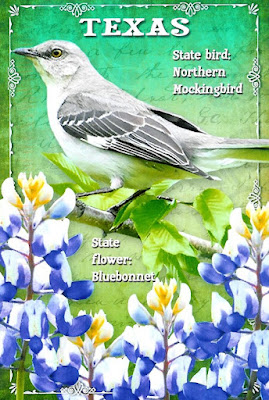 US-8604641, sent by Elle.
Northern Mockingbird is Texas state bird and bluebonnet it's state flower.
Texas designated the mockingbird (Mimus polyglottos) as official state bird in 1927.
Northern Mockingbirds have extraordinary vocal abilities; they can sing up to 200 songs, including the songs of other birds, insect and amphibian sounds, even an occasional mechanical noise. The northern mockingbird is also the state bird of Florida, Arkansas, Tennessee and Mississippi.
Texas designated the bluebonnet as the official state flower in 1901. Bluebonnet flowers were named for the blue color and sunbonnet-shaped petals (though not all bluebonnets are blue). - in: https://statesymbolsusa.org
By Martinha at 09:57 No comments:

Lately most of my officials cards came from outside Europe, mostly from Japan and USA. This month I've got 6 in a row from USA. 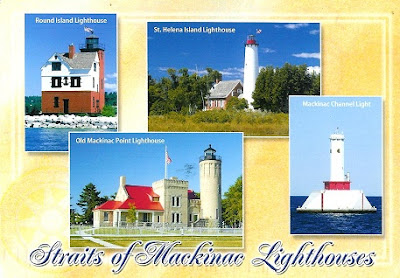 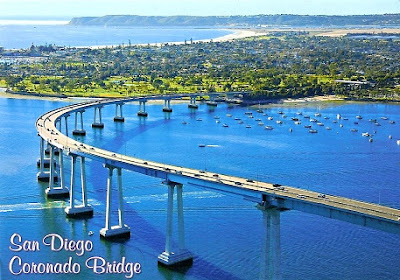 US-8604637, sent by Lizzy.
The San Diego Coronado Bridge, is a concrete and steel girder bridge that links San Diego with Coronado and expands over the San Diego Bay. The bridge was constructed as a part of State Route 75 as a way to cut across the San Diego Bay Area. The Bridge was opened to traffic in August of 1969 during the celebration of the 200th anniversary of the founding of San Diego.
The San Diego Coronado Bridge is a highlight of the San Diego Bay view, giving the bay an interesting look, similar to that of the Golden Gate Bridge on a smaller scale.
This San Diego bridge was designed to withstand the constant pull and push of the tide combined with the harsh saltwater and wind. The bridge was made in such a way that the road looked as if it floated above the water. - in: https://www.710beachrentals.com
By Martinha at 09:09 No comments: 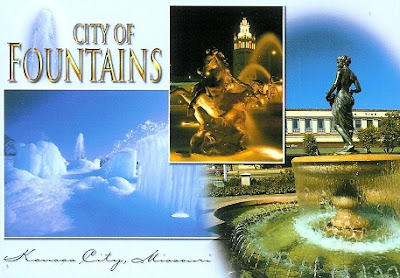 There are 200 officially registered fountains in the metropolitan Greater Kansas City area.
In a design vision dating back to the 1800s, Kansas City was imagined with “more boulevards than Paris, more fountains than Rome.” Much of Kansas City’s history is reflected in a century of fountain development.Fountains were initially established to fill the needs of people and animals and later as beautification, memorials and celebrations. - in: https://www.kansascityic.com
By Martinha at 12:10 No comments:

On the 9th of July, the capital of the Brazilian state of Rio Grande do Sul, Porto Alegre, hosted a Postcrossing meeting for the 1st time. Luzia and 8 other postcrossers were present and visited the Cultural House Mário Quintana. 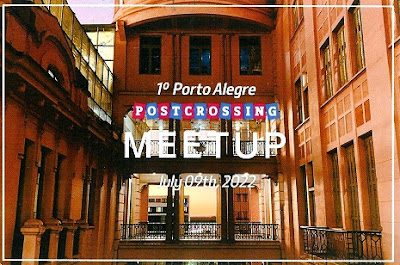 Opened to the public in December 1990, the Casa de Cultura Mário Quintana (Cultural House Mário Quintana) occupies the premises of the former Hotel Majestic, home to the poet Mário Quintana (1906-1994) between 1968 and 1980. The several spaces of the museum which honor artists from Rio Grande do Sul are focused on different artistic and cultural expressions. There are libraries, exhibition halls, regular courses and workshops, dance and theater rehearsals and performances, three cinemas and two theaters. The space Acervo Elis Regina (Elis Regina Collection) and the Quarto do Poeta (Poet’s Room), a faithful reconstruction of the room where Mário Quintana lived for more than ten years, are mandatory visits. - in: http://museubrasil.org
By Martinha at 10:03 No comments:

The Togetsukyo Bridge is a landmark in Western Kyoto's Arashiyama Distric. 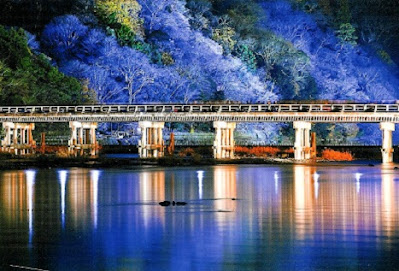 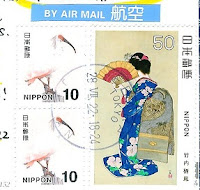 JP-1737226, sent by Chinami.
The Togetsukyo Bridge (lit. "Moon Crossing Bridge") was originally built during the Heian Period (794-1185). The original wooden bridge was repeatedly damaged by floods. The cycle of wipeout and restoration finally ceased with the present-day concrete construction of the bridge in 1934.
The bridge looks particularly attractive in combination with the forested mountainside in the background. A riverside park with dozens of cherry trees is located just adjacent to the bridge.
By Martinha at 18:26 No comments:

Asakusa is one of Tokyo's major sightseeing areas. 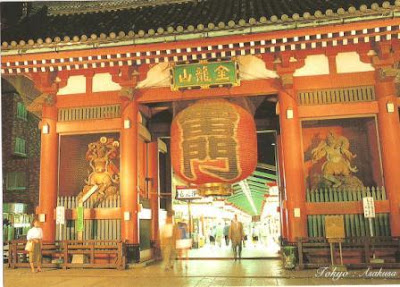 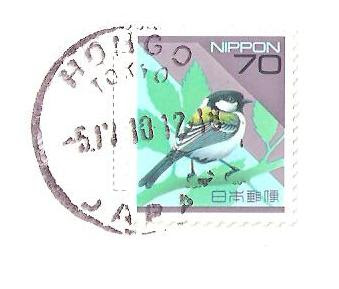 Asakusa offers the sights, sounds and smells of old, historical Tokyo like nowhere else in the metropolis can. Life is still very much lived on the streets of Asakusa, tangible and visible in the roadside vending, the rickshaws for hire, and regular street festivals. - in: https://www.japanvisitor.com/japan-city-guides/asakusa-guide 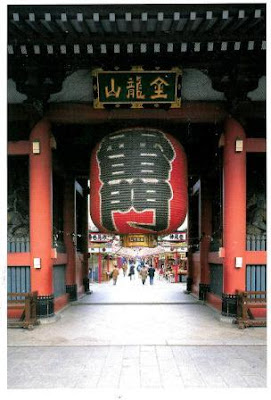 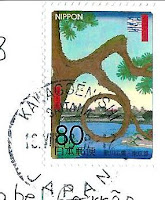 Originally built by military commander Taira no Kinmasa and dating back to 942 A.D., Kaminarimon Gate was later relocated to its current site. Reconstructed several times after being damaged by fire, the current gate dates from 1960.
The gate’s centerpiece is a magnificent red lantern made by a Kyoto lantern maker and inscribed with kanji characters meaning "thunder gate,". 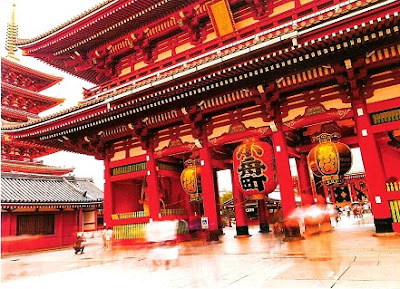 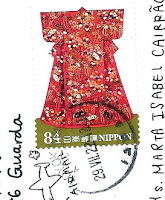 JP-1739692, sent by Junko.
The Hōzōmon is the inner of two large entrance gates, that houses the treasures of the Sensō-ji.
The Hōzōmon was also built in 942 AD by Taira no Kinmasa. Destroyed by fire in 1631, it was rebuilt by Tokugawa Iemitsu in 1636. It stood for 300 more years until it was once again burned down during the Tokyo air raids of 1945. In 1964, the present steel-reinforced concrete structure was built with fire-resistant materials for the safety of the temple treasures.
Unlike the Kaminarimon, which houses four different statues, the Hōzōmon houses two guardian statues that are located on either side of the gate's south face.
he gate also features three large lanterns. The largest and most prominent lantern is a red chōchin that hangs under the center of the gate's opening.
By Martinha at 21:43 No comments:

I've been getting a lot of Japaneses cards and I've got a bit of everything, volcanoes, castles, temples, you name it. 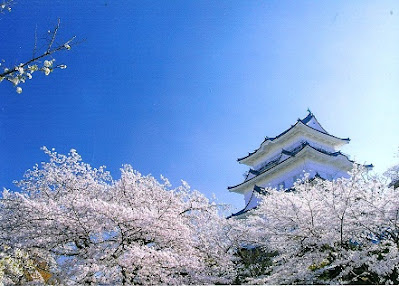 JP-1737210, sent by Hannah.
Odawara Castle is probably the best example of a castle to visit in the immediate Tokyo area.
"The Odawara castle is actually a restoration of the original castle. The original castle was constructed in 1590 by the lord Ujinao Hojo. It was later beseiged and taken over by the Okubo Clan. Fires, wars and earthquake all took their toll on the original building. 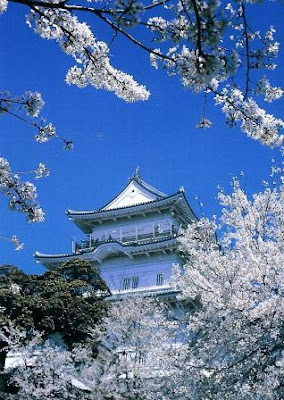 PL-221216, sent by BP.
The new construction was completed in 1960. The viewing area at the top of the castles offers some nice views of Odawara city and nearby Sagami bay. The inside of the castle houses an interesting collection of samurai armour and swords. On the grounds of the castle there is a somewhat out of place small zoo and an elephant." - in: http://www.tokyoessentials.com/odawara.html
By Martinha at 19:15 No comments:

I've received my 1st Mt. Aso card maybe 10 years ago and now, in less than 2 weeks, I've received, not 1, not 2 but 3 cards from this park/vulcano.
Located in central Kyushu, the Aso-Kuju National Park is named after and centered around the active volcanoes of Mount Aso and the Kuju Mountains. Furthermore, it includes Mount Yufu which overlooks Yufuin Onsen and Mount Tsurumi above Beppu, but these areas are less rigorously protected. Established in 1934, Aso-Kuju National Park is one of Japan's oldest national parks. 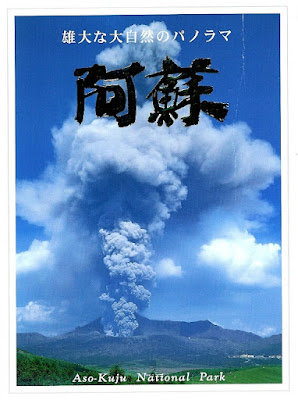 The national park is one of the best places in Japan to hike or drive through dramatic volcanic landscapes and observe active volcanoes. Mount Aso allows tourists to take a glimpse into its active crater, while the Kuju Mountains, the highest mountains on the island of Kyushu, attract hikers with an attractive network of trails. - in: https://www.japan-guide.com 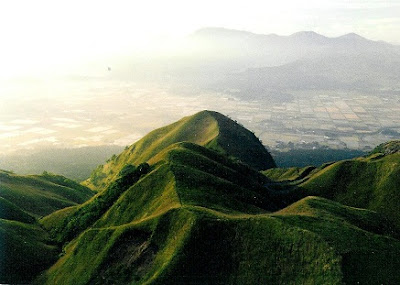 Photo by Takahiro Taguchi on Unsplash

JP-1737252, sent by Yuki.
Mount Aso, the largest active volcano in Japan, is located in Kumamoto. Mt. Aso's peak is at a towering 1,592 meters above sea level, forming a stunning mountainside view from the Aso city. Mt. Aso itself consists of five peaks — Mt. Naka, Mt. Kijiima, Mt. Eboshi, Mt. Neko, and Mt. Taka. It's believed that Mt. Aso was formed by four large eruptions that happened more than 200,000 years ago. - in: https://en.japantravel.com
By Martinha at 18:26 No comments:

UNESCO site #991 in my collection. The Caves of Nahal Me'arot, in the Carmel mountain range near Haifa in northern Israel, are classified since 2012. Marcel visited them in 2019 and he sent me this card a few days ago. 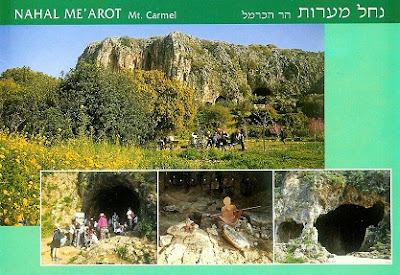 Situated on the western slopes of the Mount Carmel range, the site includes the caves of Tabun, Jamal, el-Wad and Skhul. Ninety years of archaeological research have revealed a cultural sequence of unparalleled duration, providing an archive of early human life in south-west Asia. This 54 ha property contains cultural deposits representing at least 500,000 years of human evolution demonstrating the unique existence of both Neanderthals andEarly Anatomically Modern Humans within the same Middle Palaeolithic cultural framework, the Mousterian. Evidence from numerous Natufian burials and early stone architecture represents the transition from a hunter-gathering lifestyle to agriculture and animal husbandry. As a result, the caves have become a key site of the chrono-stratigraphic framework for human evolution in general, and the prehistory of the Levant in particular. - in: https://whc.unesco.org
By Martinha at 17:41 No comments:

A card from Ukraine!! What a surprise. In a country at war, some people still write postcards. I guess it could work as some quite of glimpse of normality, past and hope for the future. Alla, who sent me this postcard from Vinnysia, in west-central Ukraine, was missing postcrossing and requested 2 addresses. She got mine. In the current circumstances, it is quite special to have this postcard now with me. 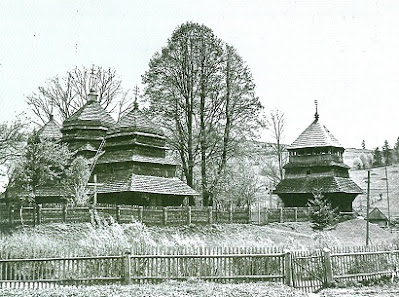 UA-1874448, sent by Alla.
I tried but I didn't find out much about this church in the village of Vovche. In this case it's not even that important. What really matters is that Alla and her family are safe and well and that this war ends soon.
By Martinha at 17:08 No comments: