The National Museum of Western Art in Tokyo is another one of French-Swiss architect Le Corbusier's  buildings classified by UNESCO as World Heritage Site. It is a concrete museum which holds a collection dedicated to western thought and art.
This card was sent by Bei Hao.

The National Museum of Western Art was built in the mid-19th century and opened in 1959. Originally, the museum housed the personal collection of Japanese industrialist Matsukata Kojiro.
When the museum was commissioned, Mr Kojiro's collection had remained mostly in Europe after the second world war. An agreement was reached between the Japanese and French governments; the latter agreed to return the artworks to Japan, on the condition that they be housed in a museum designed by a Frenchman. The result is an exemplary Modernist building that encompasses several of Le Corbusier's key ideas.
The central galleries are laid out in a square plan, whose double-height spaces are raised on pilotis.
Throughout the building, vertical circulation is mostly through ramps, and a skylight system brings natural light into the galleries. The facade is made of precast concrete panels that rest on steel brackets.
While Le Corbusier took the lead on the design, he left the detailing and construction supervision to three Japanese apprentices: Kunio Maekawa, Junzo Sakakura and Takamasa Yoshizaka. All three would go on to be successful in their own right.
The National Museum of Western Art is the famed architect's only built project in the far east. It remains open today and houses the work of significant western artists including Rodin, Manet, Picasso and Pollock. - in: https://www.dezeen.com/2016/07/23/le-corbusier-national-museum-of-western-art-tokyo-japan-unesco-world-heritage-list/
By Martinha at 17:57 No comments:

There's no doubts about this card, this one is really from an UNESCO site, the Mausoleum of Khoja Ahmed Yasawi in Kazakhstan, my 1st from there. It was sent by Emilia and she used a nice postcrossing stamp. 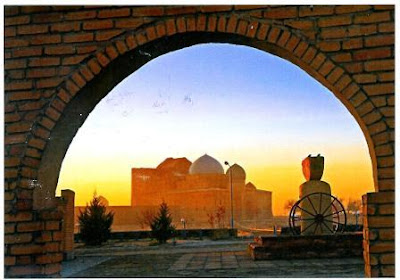 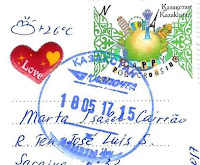 The Mausoleum of Khoja Ahmed Yasawi, in the town of Yasi, now Turkestan, was built at the time of Timur (Tamerlane), from 1389 to 1405. In this partly unfinished building, Persian master builders experimented with architectural and structural solutions later used in the construction of Samarkand, the capital of the Timurid Empire. Today, it is one of the largest and best-preserved constructions of the Timurid period. - in: http://whc.unesco.org/en/list/1103
By Martinha at 11:48 No comments:

There are an estimated number of 60,000 stecci, monumental medieval tombstones, within the borders of modern Bosnia and Herzegovina. Last year UNESCO inscribed 22 bosnian necropolises in the WHS list.
Sanda thought these in Jakir were classified but, unfortunately, I can't find them in the list of inscribed properties, therefore I won't consider this card for my UNESCO collection. 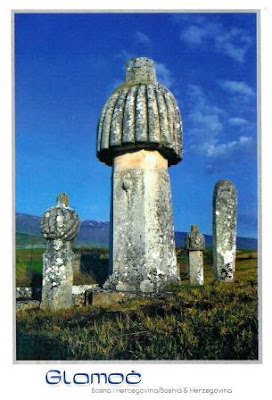 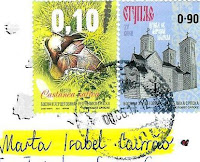 In a field in Jakir, near Glamoč in western Herzegovina, there's a supersized headstone standing over 4 meters tall and capped with a 2-meter turban. This the tombstone of Omer Aga Bašić, the tallest tombstone in Bosnia & Herzegovina.
By Martinha at 09:26 1 comment:

Not much was left of Warsaw Ghetto after the Uprising, suprisingly the St. Augustin Church was and is still standing. A great card sent by Emanuela & Cesare.

Shortly after the German invasion of Poland, in September 1939, more than 400,000 Jews in Warsaw, the capital, were confined to an area of the city that was little more than 1 square mile. In November 1940, this ghetto was sealed off by brick walls, barbed wire and armed guards, and anyone caught leaving was shot on sight. The Nazis controlled the amount of food that was brought into the ghetto, and disease and starvation killed thousands each month. (Ghettos were established in cities throughout Nazi-occupied Eastern Europe. The Warsaw ghetto was the largest in Poland.)

In July 1942, Heinrich Himmler (1900-45), the head of the Nazi paramilitary corps known as the Shutzstaffel (SS), ordered that Jews be “resettled” to extermination camps. (The Jews were told they were being transported to work camps; however, word soon reached the ghetto that deportation to the camps meant death.) Two months later, some 265,000 Jews had been deported from the Warsaw ghetto to the Treblinka extermination camp, while more than 20,000 others were sent to a forced-labor camp or killed during the deportation process. 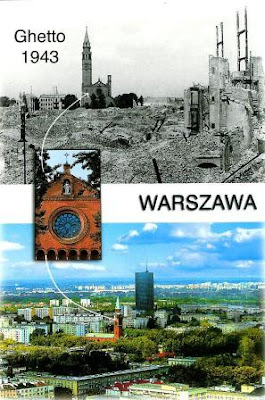 An estimated 55,000 to 60,000 Jews remained in the Warsaw ghetto, and small groups of these survivors formed underground self-defense units such as the Jewish Combat Organization, or ZOB, which managed to smuggle in a limited supply of weapons from anti-Nazi Poles. On January 18, 1943, when the Nazis entered the ghetto to prepare a group for transfer to a camp, a ZOB unit ambushed them. Fighting lasted for several days before the Germans withdrew. Afterward, the Nazis suspended deportations from the Warsaw ghetto for the next few months.
On April 19, 1943, Himmler sent in SS forces and their collaborators with tanks and heavy artillery to liquidate the Warsaw ghetto. Several hundred resistance fighters, armed with a small cache of weapons, managed to fight the Germans, who far outnumbered them in terms of manpower and weapons, for nearly a month. However, during that time, the Germans systematically razed the ghetto buildings, block by block, destroying the bunkers were many residents had been hiding. In the process, the Germans killed or captured thousands of Jews. By May 16, the ghetto was firmly under Nazi control, and on that day, in a symbolic act, the Germans blew up Warsaw’s Great Synagogue.
An estimated 7,000 Jews perished during the uprising, while nearly 50,000 others who survived were sent to extermination or labor camps. It is believed that the Germans lost several hundred men in the uprising. - in: http://www.history.com/topics/world-war-ii/warsaw-ghetto-uprising
By Martinha at 22:06 No comments:

In ten years of Postcrossing activity, this is only the 4th time I get an official card from Norway. All of them great cards, by the way.
The most famous Glaciers in the Arctic Circle are Okstindan and Svartisen. This is a card of Svartisen, the 2nd largest glacier in Norway. 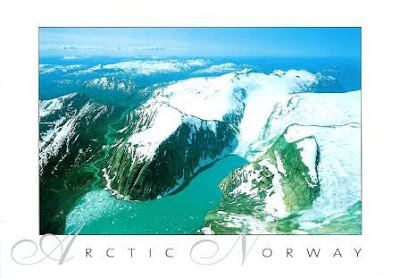 The Svartisen glacier is a part of Saltfjellet / Svartisen national park, wich is Norway´s most various national park. The Svartisen glacier is 375 square kilometer, an thereby covers quite a bit of land. The glacier stretches all the way from the widths in Saltfjellet mountain area, through beautifull valleys with calm rivers, and out to fjords and steep mountains at the coast. - in: http://www.gonorway.no/norway/articles/87
By Martinha at 10:09 No comments:

In the last days of May, between 26 and 28 May, a Postcrossing meeting was held in the Finnish city of Tampere. The meeting had a small but important Portuguese representation, Ana & Paulo, and Paula & Vitória. They sent me postcards and I've got another one sent by Heidi. 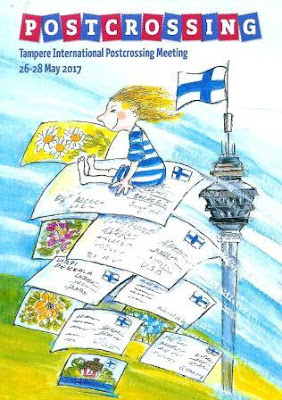 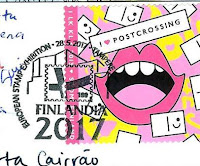 Finland celebrates its centenary this year and to celebrate it, a number of activities have been carried out throughout the year. One of them was FINLAND 2017 - an international stamp exhibition. 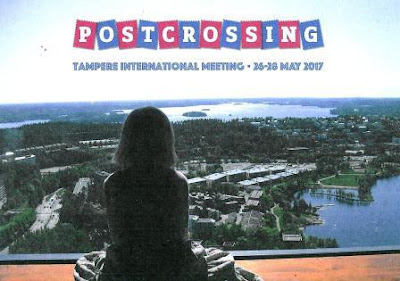 It's always a pleasure to get cards from Czech Republic. These cards shows pretty much the same view, bridges crossing Vltava river in Prague. The 1st card is an official sent by children from a pre-school. The other one was brought from there by a friend. 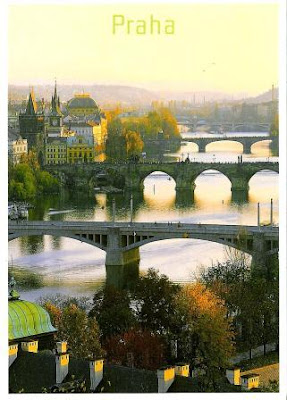 CZ-1186358, sent by stonozka.
Prague is known as the “city of hundred spires” for its many gold-tipped towers and medieval church spires that puncture the skyline, but you may as well call it the city of hundred bridges. 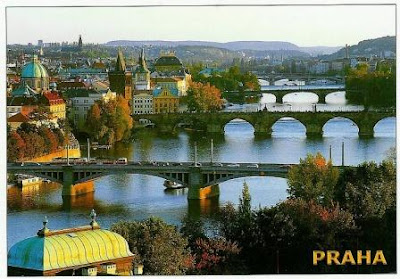 According to Prague.net, there are over three hundred bridges in the city. Eighteen of them span across river Vltava, and hundreds of other lead over many smaller rivers and brooks, and valleys. - in: http://www.amusingplanet.com/2016/03/the-bridges-of-prague.html
By Martinha at 21:19 No comments:

Last year UNESCO added 17 Le Corbusier projects to the World Heritage List, which are spread across seven countries. This card is from Germany and it was sent by Steffi.

The Weissenhof Estate is a housing estate built for exhibition in Stuttgart in 1927. It was an international showcase of what later became known as the International style of modern architecture. Two of its buildings, designed by Le Corbusier, as well as several of his other works, were inscribed as UNESCO World Heritage Sites. - in: wikipedia 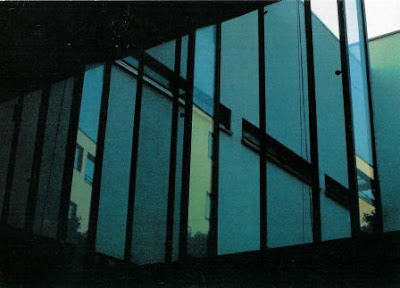 The two buildings Le Corbusier designed were intended as models for mass housing, and feature modular construction methods and mobile partitions to allow a flexible use of space.
Many of the buildings were unfortunately demolished during the second world war. However, Le Corbusier and Jeanneret's structure was purchased in 2002 by the City of Stuttgart to be preserved by the Wüstenrot Foundation.
Today, the building is home to a museum and visitors centre, known as the "Weissenhof Museum im Haus Le Corbusier". - in: https://www.dezeen.com/2016/07/30/le-corbusier-weissenhof-estate-stuttgart-modernist-housing-unesco-world-heritage-list/
By Martinha at 11:49 No comments:

Raquel really enjoys going to Postcrossing meeting, I mean, who doesn't?! In the last days of May she has been to 2 meetings, one here in Portugal and then one in Trier, Germany. She sent me a south view of Porta Nigra; back in 2008 Anna sent me a view of the north side.
In 1986 Porta Nigra was designated as part of the Roman Monuments, Cathedral of St. Peter and Church of Our Lady in Trier UNESCO World Heritage Site.

The Porta Nigra is a magnificent 2nd-century Roman city gate in Trier. It was given its name (which means "black gate") in the Middle Ages because of its weathered color. 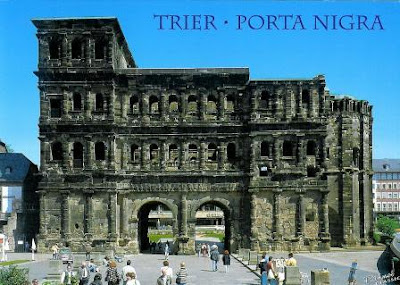 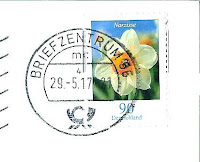 The oldest defensive structure in Germany, the Porta Nigra was erected in about 180 AD when the Roman city was surrounded by walls. Trier was a Roman colony from the 1st century AD and then a great trading centre beginning in the second century. It became one of the imperial capitals under the Tetrarchy at the end of the 3rd century, and became known as the "second Rome." 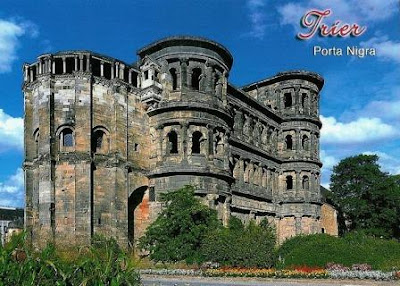 The Porta Nigra is the only one of four Roman gates that still stands in Trier; the others were gradually pillaged for their stone and iron. The Porta Nigra survived because it was used as the humble residence of a hermit monk named Simeon for seven years (1028-35). After his death he was buried in the gate and the structure was transformed into the two-story Church of St. Simeon (lay church on the bottom, monastery church on top).
Napoleon destroyed the church in 1803, but the 12th-century Romanesque apse survived and the entire structure has been restored to its medieval appearance. - in: http://www.sacred-destinations.com/germany/trier-porta-nigra
By Martinha at 22:27 No comments:

Sylt is also a german island in northern Germany. It belongs to the North Frisian Islands and is the largest island in North Frisia.
List Ost lighthouse is a cast iron light built by the danish in 1858. 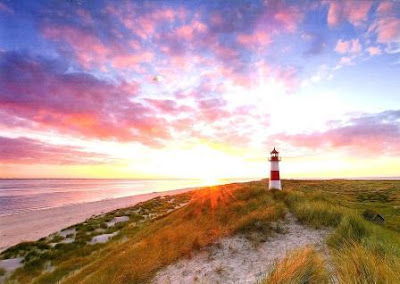 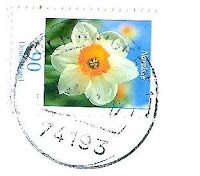 DE-6245670, sent by Kathrin.
The lighthouse is still active. This is one of two lighthouses built by the Danish government on the sand spit at the north end of Sylt to guide ships through the channel between Sylt and the adjacent (and still Danish) island of Rømø. 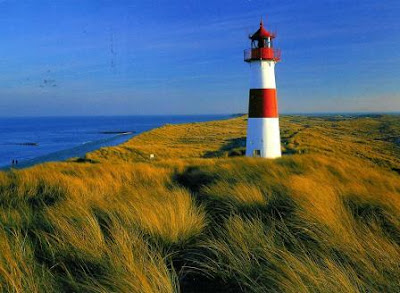 The lighthouse is close to the beach and may be endangered in the future by beach erosion. - in: https://www.unc.edu/~rowlett/lighthouse/deu2b.htm
Card sent by Melanie.
By Martinha at 22:07 No comments:

Both these cards were sent by, Norbert. The 1st was sent by him on behalf of Inês and the 2nd is an official that he sent me in 2011. 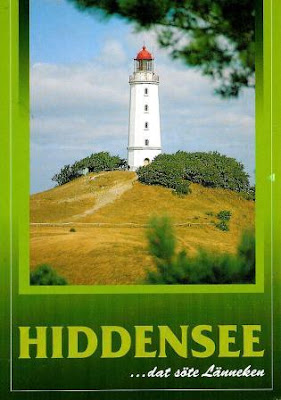 Hiddensee is an island in the Baltic Sea, located west of Germany's largest island, Rügen, on the German coast. 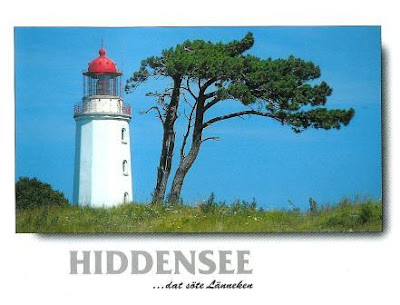 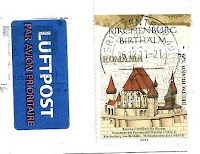