The National Stud Farm in Kladruby nad Labem is one of the oldest still operating stud farms in Europe. Here they breed the oldest variety of Czech coach horses – the Kladruber. Over the centuries of horse breeding and training, even the countryside around the stud farm has been perfectly adjusted to this purpose. Together the stud farm and this unique countryside have been classified as UNESCO WHS.
With this card sent by Lenka, I'm only missing one Czech UNESCO site. 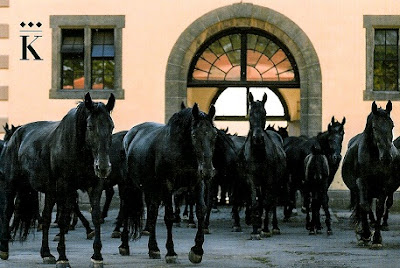 The Landscape for Breeding and Training of Ceremonial Coach Horses in Kladruber nad Labem in East Bohemia near Pardubice is a unique monument that documents the centuries-old breeding and training of the white Kladruber. The Kladruby Stud Farm is also one of the oldest stud farms in the world. In 1579, Emperor Rudolf II promoted the farm to a stud farm for the imperial court and it has been the home of the Kladruber horses ever since.
Kladruber horses are currently bred both in Kladruby, which is particularly well known for its white variety, and in Slatiňany, known for its black variety. The main horse herd is housed in Kladruby nad Labem – there are about 500 pedigree studs, seas, and foals. - in: https://www.visitczechrepublic.com
By Martinha at 17:20 1 comment:

October has been a month rich in Postcrossing meetings. Now that the virus is giving some truce (at least we want to believe that), postcrossers got together in many places around the world to celebrate  postcards. The big event of the month was the World Postcard Day, which is celebrated on the 1st. Even for those who didn't have the chance to attend a meeting, this day was a great excuse to write and send cards.
Two of these cards are from the Poscard Day meeting in Lisbon, in Oct. 2nd. The 3rd card is from Brazil. 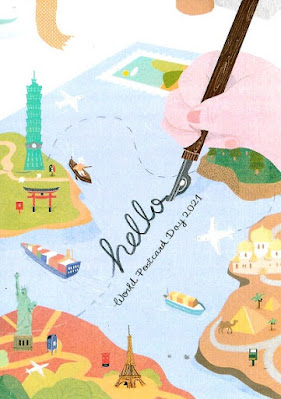 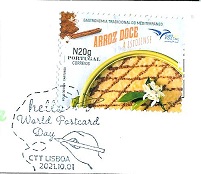 This is the Word Postcard Day 2021 official postcard, which was designed by Shao-hua Wu, winner of the Postcard Day contest.
Tiago sent me this postcard and the stamp was cancelled with the World Postcard Day special postmark. A few days later I received another WPD postcard, sent from Canada by Marie. 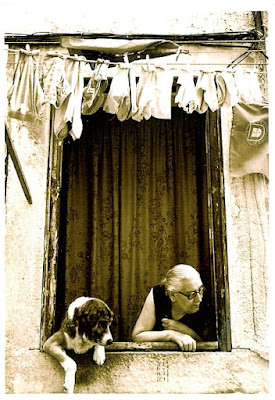 Just like Tiago, Vitória also participated in the Lisbon meeting. She sent me this super cute and perfect postcard for my elderlies collection. The card is great and she made it even greater by using a Serra da Estrela sent, also cancelled with the WPD postmark. 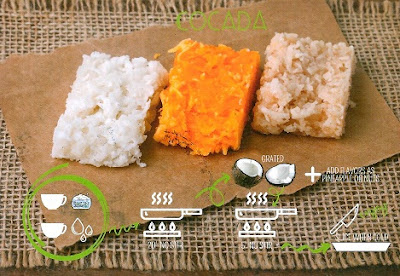 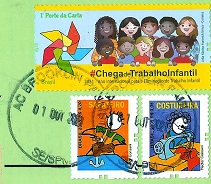 Besides writing and sending cards, Luzia also like to design cards and she has been doing that brilliantly. This is her 2nd card dedicated to Brazilian Food. If you want to cook and taste cocada, a traditional sweet dessert make with coconut, the card shows how to do it.
By Martinha at 11:04 No comments:

The Govetts Leap, near Blackheath, is one of the most breathtaking lookouts in the Blue Mountains and it offers spectacular views of the Grose Valley, surrounded by the huge sandstone cliffs. The valley is home to several rivers and creeks. 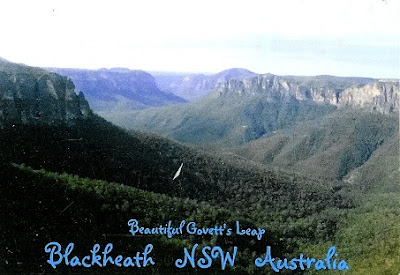 AU-781624, sent by Barb.
Govetts Leap was named after William Govett, a painter and surveyor, and also the first European settler to have visited this area.
According to the sign at the lookout, he first discovered this beautiful spot almost two centuries ago, in June 1831.
By Martinha at 11:28 No comments:

A visit to the Forbidden City, also known as Palace Museum, is a must do when traveling to Beijing. After visiting the City is also possible to enjoy some nice views from the outside. The moat and turrets offer great photo opportunities. 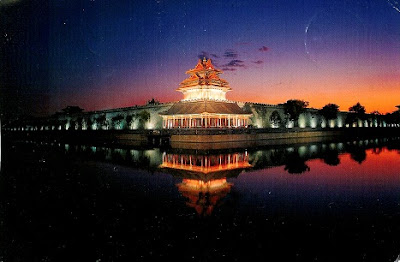 CN-3218462, sent by Qiq.
There are four beautiful turrets on the four corners of Forbidden City.  Each turret tower has  nine girders, eighteen columns and 72 ridges. The two turrets on the northeast and northwest  corners are the best photo spots.
The turrets are in full view, with a prominent setting above the moat and the forbidden City walls running either side.  The northwest turret is a perfect spot for taking best photos of the turret in sunrise glow and night view as well; the northeast turret offers good daytime and night views, and the sunset view as well.
The turrets are inaccessible to visitors.
By Martinha at 21:54 No comments:

Vichy is a spa and resort town in the French region of Auvergne-Rhône-Alpes, central France. This year the town became part of the transnational UNESCO World Heritage Site under the name "Great Spa Towns of Europe" because of its famous baths and its architectural testimony to the popularity of spa towns in Europe from the 18th through 20th centuries. - in: wikpedia
I was still missing this site and got this card, with the town's old train station, thanks to Jeroen.
In the 1850s, Vichy was a small budding spa resort. Its hot springs attracted visitors as did others in the region that had been known since Roman times. Then in July 1861 Napoleon III, emperor of France from 1852 to 1870, come to visit. He came to find relief from his rheumatism, and by the time he left, feeling better, he signed a decree throwing his full imperial weight behind the town’s development, both for his own annual pleasure while taking the waters, i.e. la cure, and to create an economic rival to the great 19th-century spa towns to the east, such Baden-Baden in Germany. A town of leisure and luxury began to grow immediately. 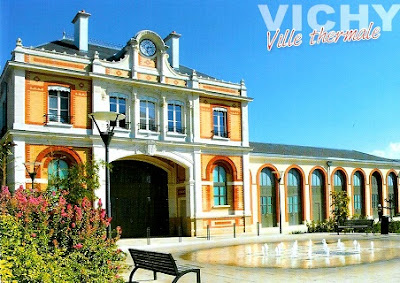 Boosting Vichy’s place on the map in the 1860s naturally implied the construction of a new train station, now the town’s old station, which has been restored, and urban planning in the streets radiating from the train station to the hot springs, a distance of about a half-mile that is the commercial heart of the town. - in: http://francerevisited.com
By Martinha at 23:31 No comments:

Ascending to 14,410 feet above sea level, Mount Rainier stands as an icon in the Washington landscape. An active volcano, Mount Rainier is the most glaciated peak in the contiguous U.S.A. 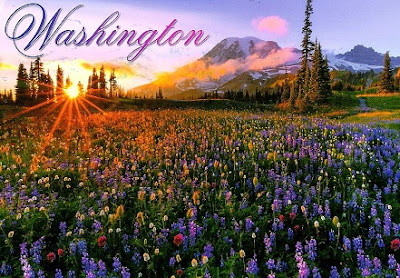 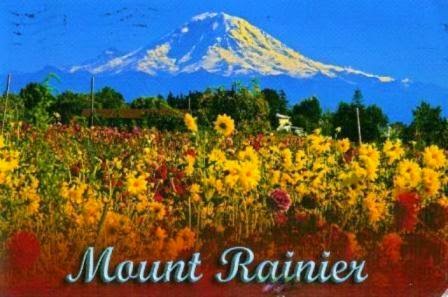 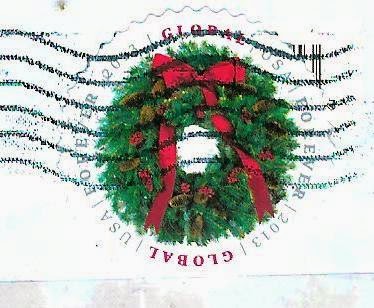 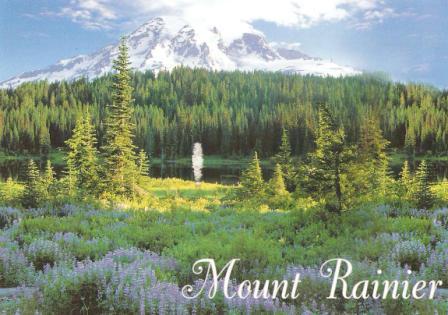 US-733762, sent by Bob.
The mountain and the surrounding area are protected within Mount Rainier National Park. With 26 major glaciers and 36 square miles (93 km2) of permanent snowfields and glaciers Mount Rainier is the most heavily glaciated peak in the lower 48 states. 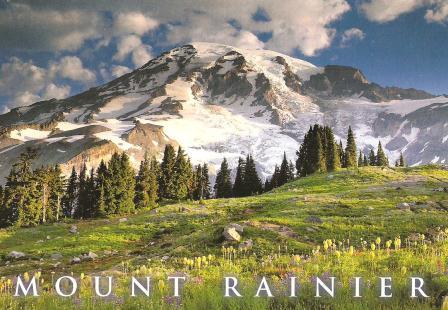 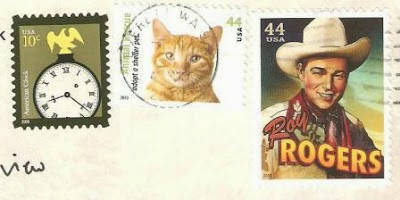 The summit is topped by two volcanic craters, each over 1,000 feet (300 m) in diameter with the larger east crater overlapping the west crater. Geothermal heat from the volcano keeps areas of both crater rims free of snow and ice, and has formed the world's largest volcanic glacier cave network within the ice-filled craters. 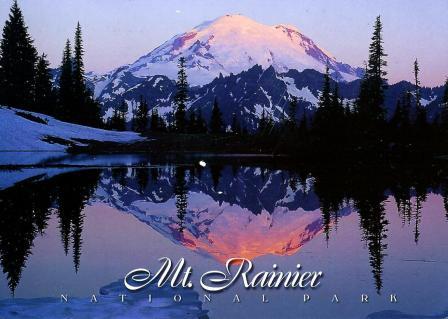 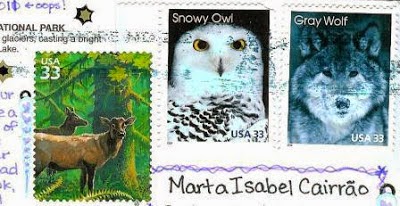 The Outer Banks are a group of barrier islands on the North Carolina coast that separate the Atlantic Ocean from the coastal sounds and inlets.
There are a total of five different lighthouses on the Outer Banks. 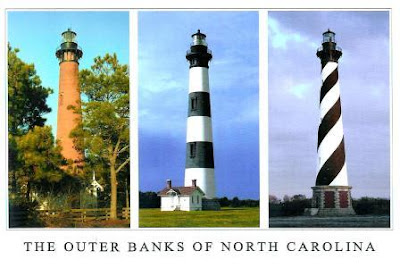 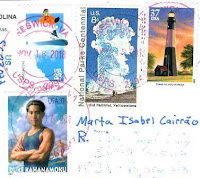 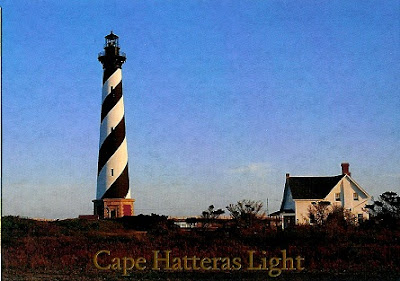