Pantanal is a place that I'd like to visit in Brazil. It must be great to have the opportunity to see so many species of animals.
I don't remember who sent the 1st card but the others were sent by Luzia, to wish me good luck in my new house, and Valéria, more than 10 years ago.
Pantanal is classified as UNESCO WHS and also Biosphere Reserve. 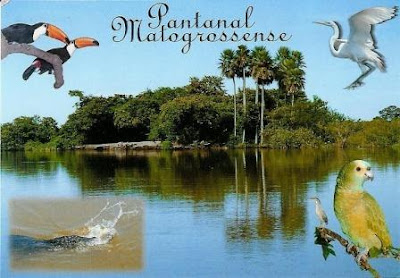 The Pantanal Conservation Area is located in western central Brazil, in the extreme south-west of the Mato Grosso e Mato Grosso do Sul State and the international border with Bolivia and Paraguay. 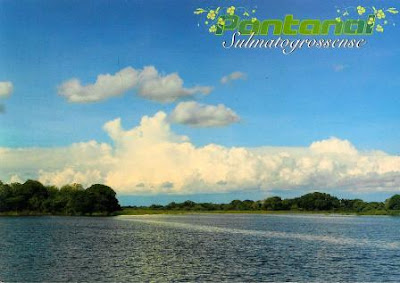 The transition between the seasonally flooded areas and the mountains is abrupt. This ecological gradient is unique to the whole Pantanal region and offers a dramatic landscape. Located between the river basins of Cuiabá and Paraguay, the site plays a key role in the spreading of nutritive materials during flooding as well as in the maintenance of fish stocks in the Pantanal. Although the property only covers a small part of the Pantanal (one of the largest wetlands of the world, covering around 14,000,000 ha), it is representative and of sufficient size to ensure the continuity of ecological processes. It also protects numerous threatened species, such as the giant armadillo, giant anteater, giant otter, marsh deer and the hyacinth macaw, the largest species of parrot. The jaguar population in the property is probably the biggest in the entire Pantanal region. The number of aquatic plant species found there is also remarkable. - in: https://whc.unesco.org/en/list/999/
By Martinha at 21:49 No comments:

A summer and winter views of the lovely Kinkaku-ji, Golden Pavilion Temple in Kyoto.
This temple is one of 17 locations comprising the Historic Monuments of Ancient Kyoto World Heritage Site. 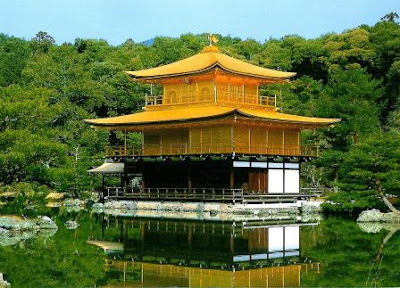 JP-1411155, sent by Mitsuyo.
Kinkaku-ji is a Zen Buddhist temple in Kyoto, Japan.
Kinkakuji was built in 1393 as a retirement villa for Shogun Yoshimitsu Ashikaga (1358-1409). He intended to cover the exterior with gold, but only managed to coat the ceiling of the third floor with gold leaf before his death. 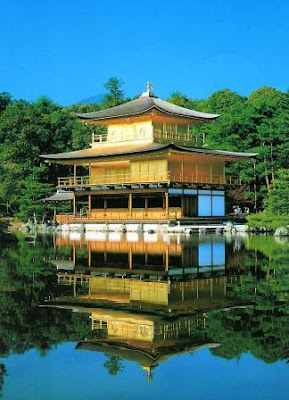 JP-318950, sent by pupunin.
The shogun lived here in luxury as Kyoto's people suffered the effects of severe famine, earthquakes and plague - as many as 1,000 people died each day during this period.
After his death, his son converted the building into a Zen temple of the Rinzai school named Rokuonji, in accordance with Ashikaga's wishes. This was an established tradition and many of Kyoto's temples are former retirement villas. 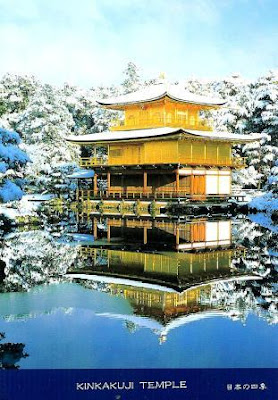 Kinkakuji burned down several times during the Onin War. In 1950, the Golden Pavilion burned again, this time by a fanatical monk.
The present temple structure dates from 1955, which was rebuilt true to the original except for a significant enhancement: both upper stories are covered in gold leaf, in accordance with Ashikaga's original intentions. In 1987, the temple was re-covered in gold leaf five times thicker than the original coating! - in: http://www.sacred-destinations.com/japan/kyoto-kinkakuji
By Martinha at 21:46 No comments:

The Trinity Cathedral, St Nikon’s Church and St. Serapion's Tent are just 3 of the over fifty different buildings, located within ancient defensive walls of the Trinity St Sergius Lavra Monastery in Sergiev Posad. 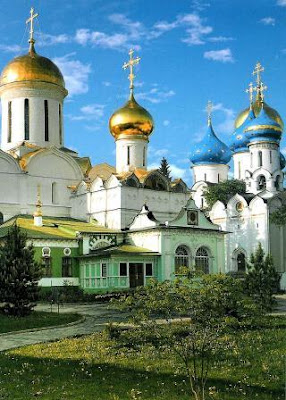 The Trinity Cathedral is the main church of the monastery, and its oldest building. It was built between 1422 and 1423 (...). The church's crypt contains the relics of the monastery's founder, St Sergey of Radonezh, which are venerated by many visitors.
St Nikon’s Church is situated by the southern walls of the Trinity Cathedral. The church as built over 1623-1624, and contains the grave of St Nikon of Radonezh – one of the early acolytes of St Sergey of Radonezh. - in: https://anotherrussia.com
At the western wall of the Nikon church a chapel called Serapion's Tent was built over the tomb of St. Serapion, the archbishop of Novgorod.
By Martinha at 21:31 No comments:

Thanks to Martin and a stadium card, now I've a new flag in my FOTW collection. 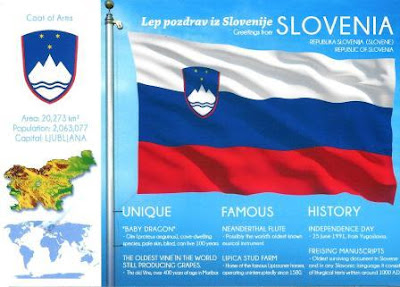 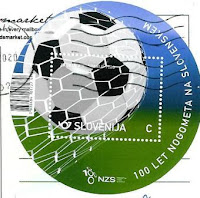 Slovenia has an area of 20.273 km², a population of 2.063.077 and its capital is Ljubljana.
Unique:
* "Baby Dragon" - Olm (proteus anguinus), cave dwelling species, pale skin, blind, can live 100 years;
* The oldest vine in the world still producing grapes. The old vine, over 400 years of age in Maribor;
Famous:
* Neanderthal Flute - possibly the worlds oldest known musical instrument;
* Lipica Stud Farm - home of the famous Lipizzaner horses, operating uninterruptledly since 1580;
History:
* Indepence Day - 25 de June 1991 from Yugoslavia;
* Freising Manuscripts - oldest surving document in Slovene and in any Slavic language. It consists of liturgical tests written around 1000 AD.
By Martinha at 21:12 No comments:

"The Meeting Place", often referred to as "The Lovers" or even just the "kissing statue", is a  9 metres tall bronze sculpture by Paul Day is on the Grand Terrace inside St Pancras station and is one of the first things you see when you get off the Eurostar. 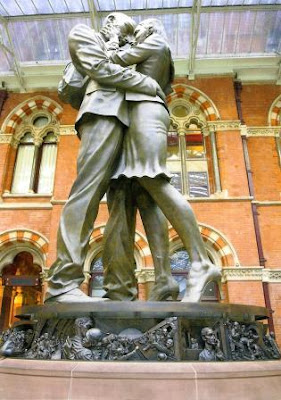 GB-1259284, sent by Richard.
The sculpture commemorates St. Pancras becoming St. Pancras International Station in 2007. Its base is encircled by a high-relief frieze depicting images of the rich history and characters of the tube and train.
By Martinha at 22:39 No comments:

Despite having been sent from different countries, both these cards are from south of England. 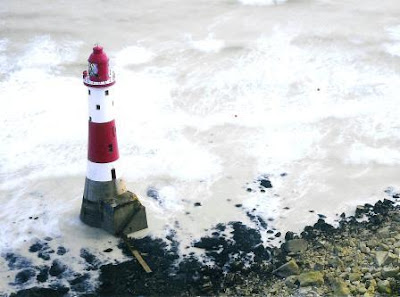 DE-9398305, sent by Ulrike.
Beachy Head Lighthouse is a lighthouse located in the English Channel below Beachy Head in East Sussex. It is 43 m (141 ft) in height and became operational in October 1902. It was the last traditional-style 'rock tower' (i.e. offshore lighthouse) to be built by Trinity House. - in: wikipedia 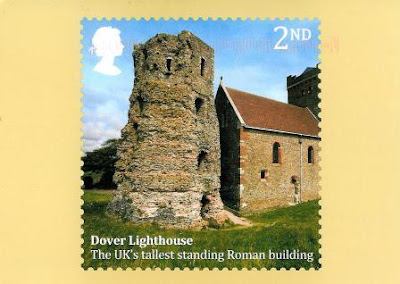 The Roman Lighthouse at Dover, in the county of Kent, England, is across the English Channel. It was one of the two lighthouses marking the mouth of the port of Dover. It was probably commissioned by Caligula when the Tour d’Ordre was erected at about 50 A.D. It was built on the sheer white cliffs which dominated the port. Its strategic location made that in the Middle Ages it was used as a watchtower, thus becoming the origin of Dover Castle, of which it is part now. It is 62-foot high (18.6 m), of which only 43 (12.9 m) correspond to the Roman building while the rest corresponds to the refurbishment made during the reign of Henry VIII. For centuries, the derelict walls were used to build the belfry of the Chapel of St. Mary. - in: http://www.torredeherculesacoruna.com/index.php?s=80&l=en
By Martinha at 22:16 No comments:

Official from the Netherlards with Scheveningen lighthouse. 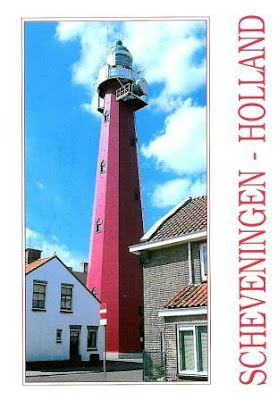 NL-4695849, sent by Anne.
Scheveningen Lighthouse was completed in 1875 and has the status of a national monument. If you don't mind to climb its 159, you'll be rewarded with one of the best views of the North Sea and surroundings!
By Martinha at 21:27 No comments:

Back in March Anne from germany sent me an official postcard but as it was taking too long to arive she decided to send me another one, the Bavarian postcard, which arrived in early May. In the first days of July, after almost 4 months, the postcard that she had sent in March arrived too. Never lose hope on your "lost" mail. 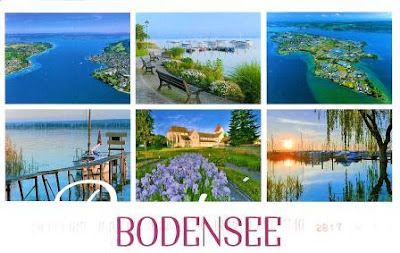 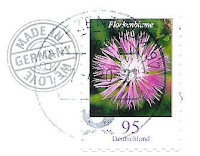 DE-9119260, sent by Anne.
Bodensee, Lake Constance, lying below the northern edge of the Alps, is the largest lake in Germany. Also bordered by Austria and Switzerland, it offers strikingly beautiful scenery with its majestic expanse of water, and encompasses some 270 kilometers of shoreline, by far the greatest share of it in Germany. The largest and deepest part of the lake, the Obersee (Upper Lake), extends from Bregenz Bay to Konstanz and is fringed by numerous old lakeside towns and attractive villages with incredible views of the Swiss Alps.
Long a center for water sports — it's particularly known among sailing and windsurfing enthusiasts — the area is also rich in culture and history and boasts many old castles, quaint medieval villages, and beautiful gardens. - in: https://www.planetware.com 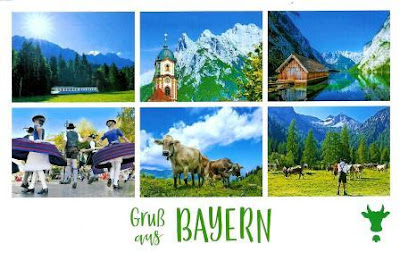 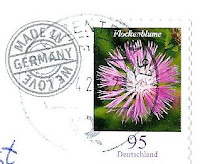 DE-9119260, sent by Anne.
Bavaria is one of the most popular and most scenic travel destinations in Germany. For many, Bavaria means sausage, beer, and lederhosen, and although you’ll find all of that on your vacation, this part of Germany has much more to offer. - in: https://www.tripsavvy.com
Bavaria is filled with attractions and offers some of the country's most beautiful scenery, including spectacular mountain peaks, rolling hills, and lovely lakes. The Danube winds scenically through its center. Some of the most beautiful towns in Germany are in Bavaria, and the entire area is steeped in history. - in: https://www.planetware.com
By Martinha at 21:17 No comments:

I had a card of this castle in my favorites for many, many years and now I finally got one. Many thanks Elaine.

Lichtenstein Castle is located in the southwest state of Baden Wurttemberg, in Germany, overlooking the village of Honau. 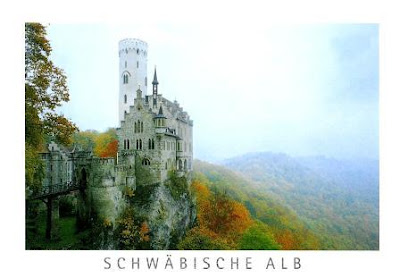 DE-9393443, sent by Elaine.
The “castle” is actually a hunting lodge, built on the ruins of a former castle, and the current structure was completed in 1842. It was built in a pseudo-medieval style, which was very en vogue in the 19th century.
In the novel Lichtenstein, author Wilhelm Hauff had described medieval life in the original castle so vividly that local ruler Wilhelm Graf von Württemberg felt inspired to have the fictional castle built in reality. Ruins of the original castle, built in the 1100s, can be found just outside the walls of the existing castle.
The most striking feature of the castle is that the outer wall is built on the edge of a cliff, which can be very intimidating for anyone with a fear of heights!
During World War II, an American tank passing through the valley below fired a shell, which directly hit the main tower. Fortunately, the shell failed to explode, saving the impressive building from destruction. However, a hole in the plaster where the shell struck remains to this day.
Fans of Super Street Fighter II may also recognize the castle, which provided inspiration for Cammy’s stage. - in: https://www.atlasobscura.com/places/lichtenstein-castle
By Martinha at 21:34 No comments: