On Christmas time a lot of Christmas cards arrived. All of them are great. Thank you all :D 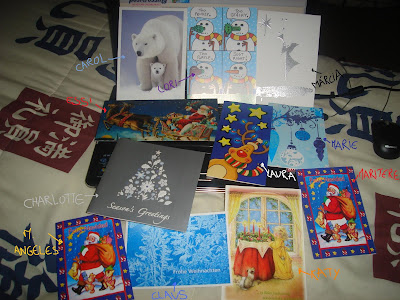 These are the cards sent by Katy "katts1985" from Estonia, Carol "adobe" and Lori from USA, Essi "hadassah" from Finland, Maritere "maritekia" and M. Angeles "maer" from Spain, Laura "laurarual" from the Netherlands, Márcia "magl" from Portugal, Marie "renegade_cavalcade" from Canada, from Germany Claus "elbe" and Charlotte "purple_girl" from UK.

A few days ago i've received an envelope from Germany with these cards. I couldn't believe when i realized that all of these cards were new unesco cards and from places not so easy to get. This was a great Christmas present. The generous postcrosser was Claus, "elbe" a trully Santa Claus :D Vielen Danke. 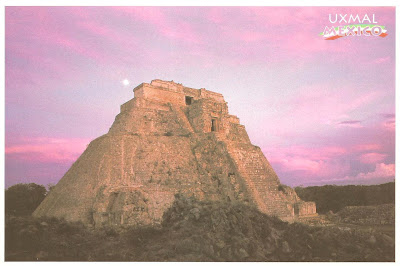 " Uxmal is a large pre-Columbian ruined city of the Maya civilization in the state of Yucatán, Mexico.
While much work has been done at the popular tourist destination of Uxmal to consolidate and restore buildings, little in the way of serious archeological excavation and research has been done; therefore, the city's dates of occupation are unknown and the estimated population (about 25,000 people) is at present only a very rough guess subject to change upon better data. Most of the architecture visible today was built between about 700 and 1100.
Maya chronicles say that Uxmal was founded about 500 A.D. by Hun Uitzil Chac Tutul Xiu. For generations Uxmal was ruled over by the Xiu family, was the most powerful site in western Yucatan, and for a while in alliance with Chichen Itza dominated all of the northern Maya area. Sometime after about 1200 no new major construction seems to have been made at Uxmal, possibly related to the fall of Uxmal's ally Chichen Itza and the shift of power in Yucatan to Mayapan. The Xiu moved their capital to Maní, and the population of Uxmal declined. After the Spanish conquest of Yucatán (in which the Xiu allied themselves with the Spanish), early colonial documents suggest that Uxmal was still an inhabited place of some importance into the 1550s, but no Spanish town was built here and Uxmal was soon after largely abandoned." - in: wikipedia 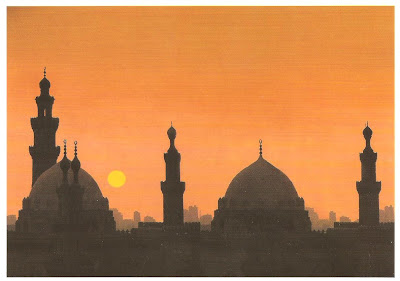 " Tucked away amid the modern urban area of Cairo lies one of the world's oldest Islamic cities, with its famous mosques, madrasas, hammams and fountains. Founded in the 10th century, it became the new centre of the Islamic world, reaching its golden age in the 14th century." - in: http://www.unesco.org/ 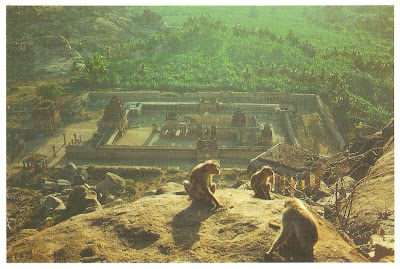 "The austere, grandiose site of Hampi, India, was the last capital of the last great Hindu Kingdom of Vijayanagar. Its fabulously rich princes built Dravidian temples and palaces which won the admiration of travellers between the 14th and 16th centuries. Conquered by the Deccan Muslim confederacy in 1565, the city was pillaged over a period of six months before being abandoned." - in: http://www.unesco.org/ 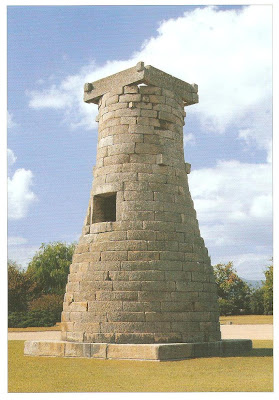 These are the cards i've got from the 3rd travelling envelope in the portuguese community. The postcrossers in this group were valdagua, joaninha, nelsonpsoares, luciano, Carla and me. 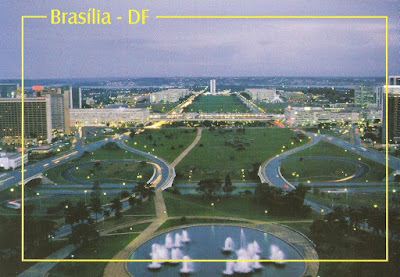 This is a card from the brazilian capital city, Brasília. 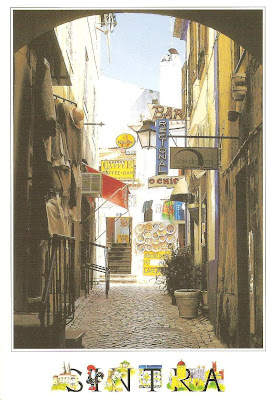 A typical street in Sintra, Portugal. 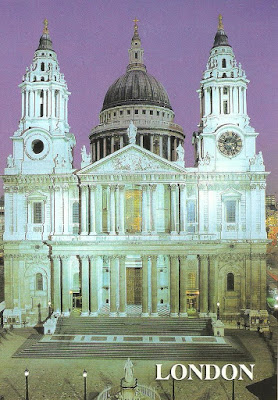 And a card from London with the St. Paul's Cathedral.
"St Paul's Cathedral is an Anglican cathedral on Ludgate Hill, the highest point in the City of London, and is the seat of the Bishop of London. The present building dates from the 17th century and was designed by Sir Christopher Wren. It is generally reckoned to be London's fifth St Paul's Cathedral, all having been built on the same site since 604 A.D. The cathedral is one of London's most famous and most recognisable sights at 365 feet high. It was the tallest building in London from 1710 to 1962, and its dome is also among the highest in the world, St Peter's Basilica in Rome being higher. The Monument to the Great Fire of London, also designed by Wren and the tallest doric column in the world, would fit inside the cathedral's interior." - in: wikipedia
By Martinha at 01:42 No comments:

This was one of the cards in my favorites album and Ana "ninocas" sent it as a RAS card. 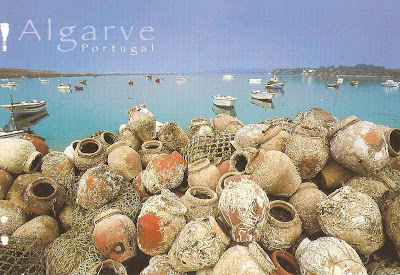 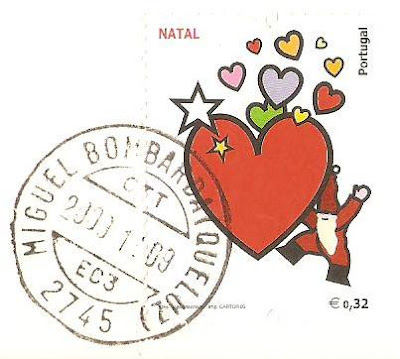 I really love it.
Thanks Ana.

A card from Bali, Indonesia, sent by Relie. 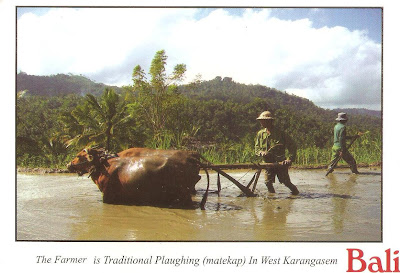 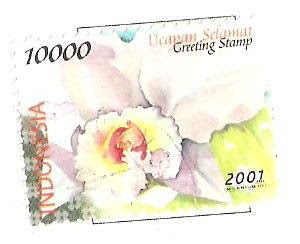 Matekap is a process that uses cows to plough muddy paddy fields in Bali, however these days are getting harder and harder to find this rare activities. Famers prefer to use machine instead.

I really like churches and russian churches are always so beautiful, aren't they?
This is the St. Nicholas Church in Khamovniki. 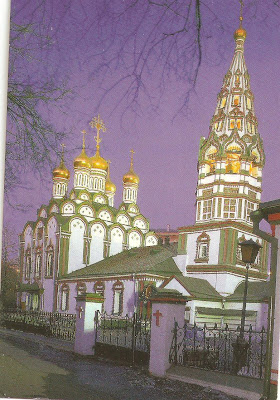 RU-92052, sent by Alyona.
"Church of Saint Nicholas in Khamovniki is a late 17th century parish church of a former weavers sloboda in Khamovniki District of Moscow. The church is a federal listed memorial building. It marks the corner of present-day Komsomolsky Prospect and Leo Tolstoy Street, two blocks beyond the Garden Ring. The church yard occupies a whole block between Leo Tolstoy and Timur Frunze streets and includes a row of small old houses.
First records of a presumably wooden church on this site are dated 1625. The main five-domed church was built in 1679-1682; belltower and refectory were completed around 1694. Present day church sources claim that the belltower in Khamovniki is one of the highest tent-style belltowers in Moscow region.
The church is an example of late Muscovite Baroque that preceded short-lived Naryshkin Baroque of 1690s. It belongs to a numerous class of bonfire temples – church buildings without three internal load-bearing columns, crowned with layers of small circular kokoshnik-type gables. Each gable is a symbol of a heavenly fire (biblical thrones - angels or seraphs); a tightly packed group of gables is an architectural metaphore for the Throne of God." - in: wikipedia
By Martinha at 14:00 No comments: 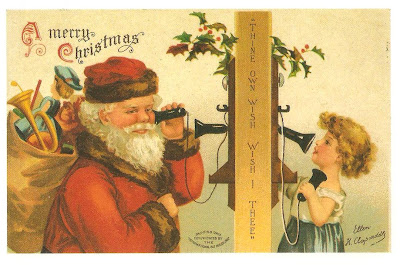 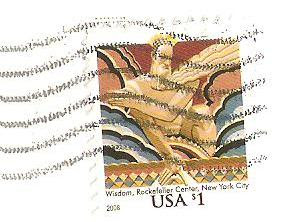 US-556761, sent by Sara.
This is a reproduction of an antique card from 1907.
"A Merry Christmas - Thine own wish wish I thee."
From the collection of Gabriela Oldham. 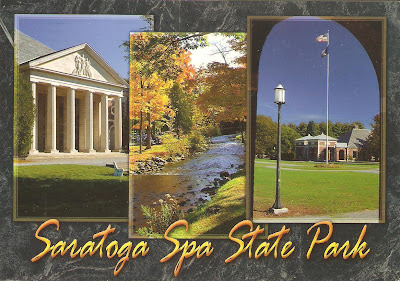 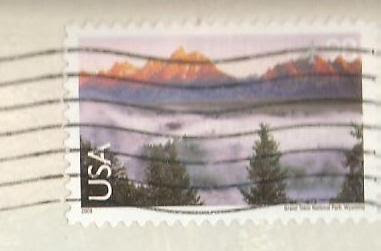 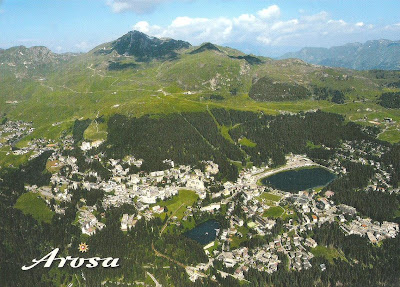 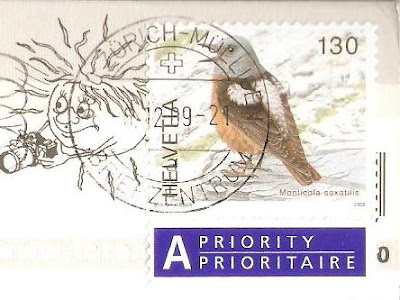 This card from Switzerland arrived today. It wa sent by Grace "azzurri". I'll meet her and other postcrossers, next February in Zurich.... :P
Arosa is a municipality in the district of Plessur in the canton of Graubünden in Switzerland. It is known for being both a summer and a winter resort. Arosa possesses a well-known and safe skiing area and boasts over 60 kilometers (37 mi) of slopes. 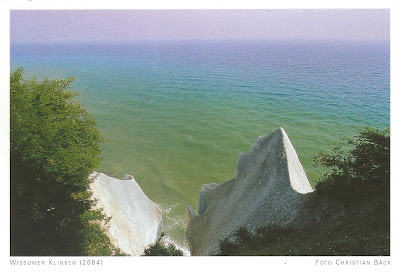 No, this isn't an iceberg. Wissower Klinklen is, a chalk formation that can be found in the Jasmund National Park in the northeast of Rügen island. "The park is famous for the largest chalk cliffs of Germany, the so called Königsstuhl (German = "king's chair"). These cliffs are up to 161 m high above the Baltic Sea.
The Wissower Klinken, collapsed into the Baltic Sea on February 24, 2005 in a landslide caused by spring-thaw weather conditions." - in: wikipedia
The card was sent by "RikeH". 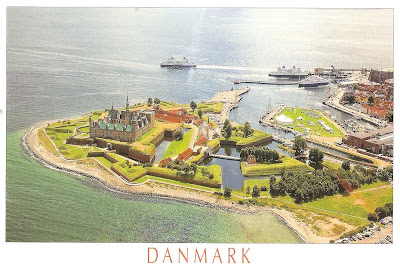 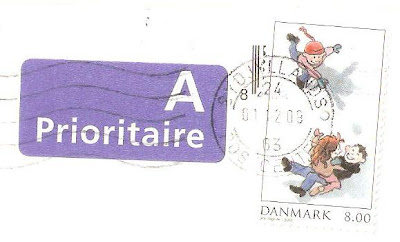 Anna "annab3783" sent me this card from Denmark with the Kronborg Castle, a new unesco whs in my collection :D.
"Kronborg is situated near the town of Helsingør (immortalised as Elsinore in Shakespeare's Hamlet) on the extreme northeastern tip of Zealand at the narrowest point of the Øresund, the sound between Denmark and Sweden. In this part, the sound is only 4 km wide, hence the strategic importance of maintaining a fortress at this location commanding one of the few outlets of the Baltic Sea. The castle has for centuries been one of the most important Renaissance castles in Northern Europe and was added to UNESCO's World Heritage Sites list on November 30, 2000." - in: wikipedia
By Martinha at 01:46 No comments:

Finally some time to scan and post cards.
The November RR cards keep arriving, these are from Russia, Malaysia and Turkey. 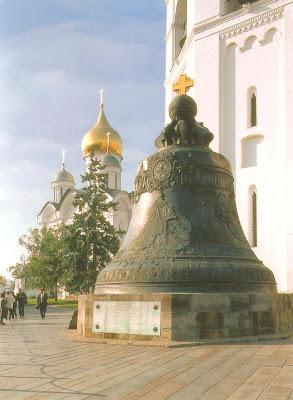 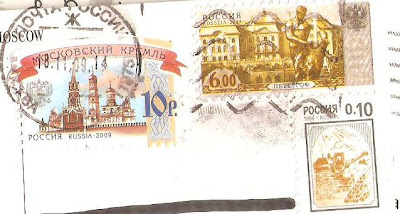 Maria "raima" from Moscow sent be this card with the Tsar Bell.
"The Tsar Bell is a huge bell on display on the grounds of the Moscow Kremlin. The bell was commissioned by Empress Anna, niece of Peter the Great.
The bell is currently the largest bell in the world, weighing 216 tons, with a height of 6.14 m ( 20.1 ft) and diameter of 6.6 m ( 21.6 ft). It was founded from bronze by masters Ivan Motorin and his son Mikhail in 1733–1735. The bell was never rung — during a fire in 1737, a huge slab (11.5 tons) cracked off while it was still in the casting pit.
After the fire, the bell remained in its casting for a century. In 1836, the Tsar bell was placed on a stone pedestal next to the Ivan the Great Bell Tower in the Moscow Kremlin. The broken slab is nearly three times larger than the world's largest bell hung for full circle ringing, the tenor bell at Liverpool Cathedral.
For a time, the bell served as a chapel, with the broken area forming the door. There has apparently been some talk of recasting it.
According to a National Public Radio special on the bell, some Old Believers believe that on Judgement Day, it will be miraculously repaired and lifted up to heaven, where it will ring the blagovest (call to prayer)." - in: wikipedia 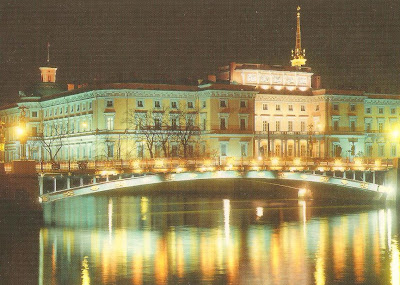 Another card from Russia but this one is from St. Petersburg and it was sent by Lydia "lydusha".
"St. Michael's Castle also called the Mikhailovsky Castle, is a former royal residence in the historic centre of Saint Petersburg. St. Michael's Castle was built as a residence for Emperor Paul I by architects Vincenzo Brenna and Vasili Bazhenov in 1797-1801. The castle looks different from each side, as the architects used the motifs of various architectural styles such as French Classicism, Italian Renaissance and Gothic.
Afraid of intrigues and assassination plots, Emperor Paul I didn't like the Winter Palace where he never felt safe. Due to his personal interest in Medieval knights and his constant fear of assassination, the new royal residence was built like a castle with rounded corners in which a small octagonal courtyard is located.
After Paul's death, the imperial family returned to the Winter Palace; St. Michael's Castle was abandoned and in 1819 was given to the army's Main Engineering School (later to become the Nikolayevskaya Engineering Academy). Since then the building has been called the Engineer Castle. Between 1838 and 1843, the Russian writer Fyodor Dostoyevsky studied as a cadet at the Main Engineering School.
In the early 1990s, St. Michael's Castle became a branch of the Russian Museum and now houses its Portrait Gallery, featuring official portraits of the Russian Emperors and Empresses and various dignitaries and celebrities from the late 17th to the early 20th century." - in: wikipedia 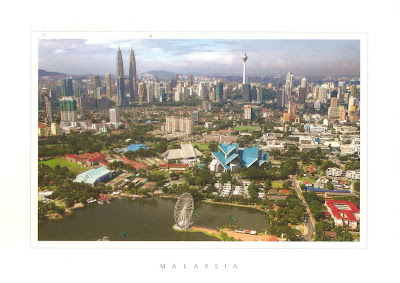 This is a card from Kuala Lumpur in Malaysia. It was sent by "Yiphinwai".
On the card there's the Titiwangsa Lake, an artificial lake from one of old minning pool in the city. Many of these pools can be found in Kuala Lumpur because minning was the main economic activity during the foundation of the city.
The ferris wheel Eye on Malaysia was moved to Malacca. 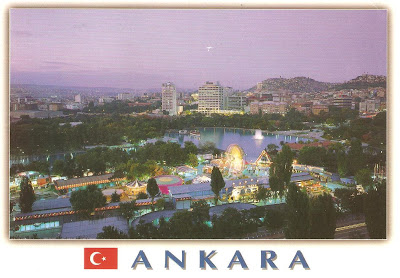 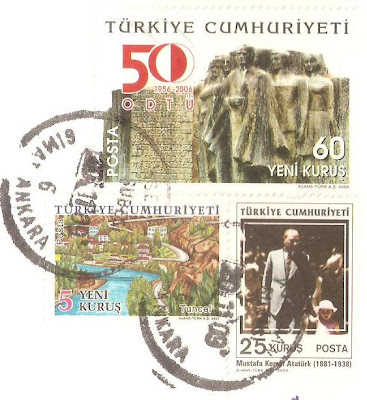 I didn't have any cards with ferris wheels but received 2 through this RR. This card sent by Pinar "pinuccia" shows the Gençlik Park in Ankara, Turkey.
Gençlik Park is the oldest park in Ankara (1943). It used to be the only place for the residents of Ankara to enjoy the taste of nature, complete with pond and greenery.
This 38 hectares park is where today's middle-aged generation spent their youth. The park houses what once was the only amusement park in Ankara. There are also tea gardens, restaurants, outdoor cafes, outdoor theatre performances and a large pond on which you can row or water-cycle.
By Martinha at 00:45 1 comment: