I love smaller, charming and historical towns. Chefchaouen fits perfectly these categories!! I really want to visit a few places in Morocco and after seeing pictures of this town, I want to go there too. Celina says is really worth to visit.

Chefchaouen is a small charming city of about 40,000 inhabitants located in northeastern Morocco near the Mediterranean Sea. Situated in the heart of Morocco's Rif Mountains, Chefchaouen is a tourist’s delight with affordable accommodations, and above all, a picturesque town set against the dramatic backdrop of the Rif Mountains filled with white-washed homes with distinctive, powder-blue accents.
The city of Chefchaouen was founded in 1471. Located in an enclave difficult to access it dominated the mercantile route between Tetuan and Fez and served as a base to restrain the entrance and influences of the Portuguese of Ceuta. During the 15th and 17th century the city prospered and grew in considerable form with the arrival of the Moriscos and Jews who were expelled from Spain. In 1920, the Spanish seized Chefchaouen to form part of Spanish Morocco. Spain returned the city after the independence of Morocco in 1956. 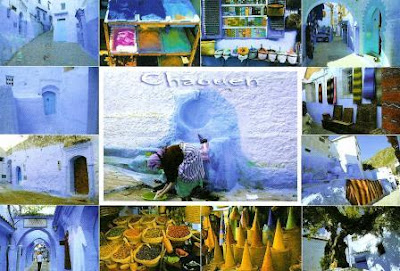 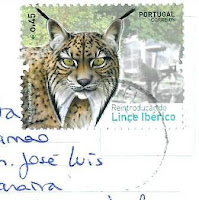 Chefchaouen was painted blue by the Jewish refugees who lived there during the 1930's. The beauty of Chefchaouen's mountainous surroundings are enhanced by the contrast of the brightly painted medina (old town). It is this beauty and the relaxed atmosphere of the town that makes Chefchaouen very attractive to visitors. The main square in the medina is lined with cafes and filled to the brim with locals and tourist mingling easily.
Chefchaouen is a popular shopping destination as well, as it offers many native handicrafts that are not available elsewhere in Morocco, such as wool garments and woven blankets. The goat cheese native to the area is also popular with tourists. - in: http://www.amusingplanet.com/2012/08/chefchaouen-blue-city-of-morocco.html
By Martinha at 18:29 1 comment:

Thanks to Paula now I've cards from all the UNESCO sites in Morocco. Tétouan is a city in the north of the country and its medina was added to the WHS list in 1997. 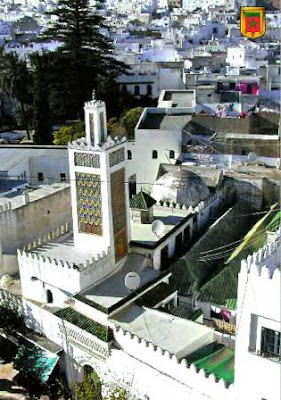 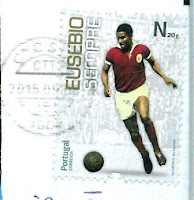 Tétouan was of particular importance in the Islamic period, from the 8th century onwards, since it served as the main point of contact between Morocco and Andalusia. After the Reconquest, the town was rebuilt by Andalusian refugees who had been expelled by the Spanish. This is well illustrated by its art and architecture, which reveal clear Andalusian influence. Although one of the smallest of the Moroccan medinas, Tétouan is unquestionably the most complete and it has been largely untouched by subsequent outside influences. - in: http://whc.unesco.org/en/list/837
By Martinha at 17:21 No comments:

Today I've something new in this blog. Well, all the cards are new but this one is from a country I've never posted cards from, East Timor.
These strange and beautiful houses are called Uma Lulik, they're sacred houses. These two can be found in Bauru. 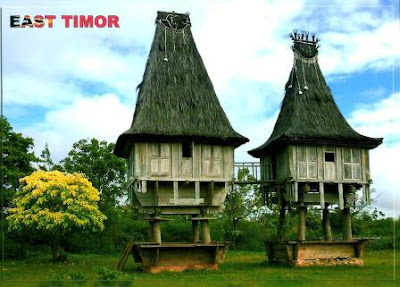 Photo 2010 © Karel Hrdina
Uma luliks are sacred animist totem houses in East Timor, made out of natural materials like timber, bamboo, wooden planks, twine and rope made out of the native palm called arenga pinnata. Besides being just a construction, the concept of uma lulik includes rituals, ceremonies and beliefs – these were the houses where the living could communicate with their ancestors. The word itself, Lulik, refers to the spiritual cosmos, root of life and sacred rules that dictate relationships between people and nature.
These houses were constructed by traditional architects, who possessed the knowledge of rituals to be performed while building these constructions. They knew the intricate details of the building materials – which grass had to be used for the house's roof, what wood to use for making posts and planks, what to use to tie the parts together. All the materials had to be natural in order to tie the house with the intangible forces of nature. - in: http://tripfreakz.com/offthebeatenpath/uma-lulik-the-sacred-animist-houses-in-east-timor
By Martinha at 21:14 No comments:

It makes me really happy when I finally have cards from all the UNESCO sites from a certain country. Malaysia is finally one of those countries. Thanks to Erica, Malaysia has no missing sites on my UNESCO missing list. The Archaeological Heritage of the Lenggong Valley was added to the WHS list in 2012. 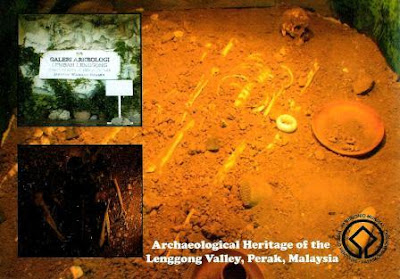 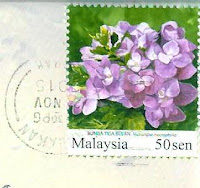 Situated in the lush Lenggong Valley, the property includes four archaeological sites in two clusters which span close to 2 million years, one of the longest records of early man in a single locality, and the oldest outside the African continent. It features open-air and cave sites with Palaeolithic tool workshops, evidence of early technology. The number of sites found in the relatively contained area suggests the presence of a fairly large, semi-sedentary population with cultural remains from the Palaeolithic, Neolithic and Metal ages. - in: http://whc.unesco.org/en/list/1396
By Martinha at 21:29 No comments:

Another chinese card, this one an official that arrived a few days ago. It shows the Taihao Mausoleum at Huaiyang. 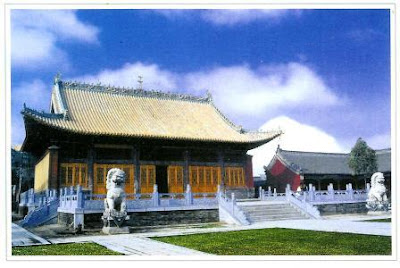 CN-1858289, sent by Leu.
The tomb of Fuxi (a legendary Chinese emperor) is called Taihao Mausoleum. It was built according to the mathematical logic of Fuxi's innate eight diagrams. The mausoleum is located 1.5 kilometers north of Huaiyang County in Henan Province. Of all ancient tablets bearing the erection date inside the mausoleum, there's the earliest "imperial tablet pavilion", which was erected in 1513 AD. - in: http://www.cultural-china.com/chinaWH/html/en/Traditions67bye273.html
By Martinha at 17:21 No comments:

Mt. Huangshan in China is also a UNESCO site, it was inscribed in 1990. Since 2008 I've got all these cards from there and they were sent by Lucy, Qusia, Carol, Abay and Lior. 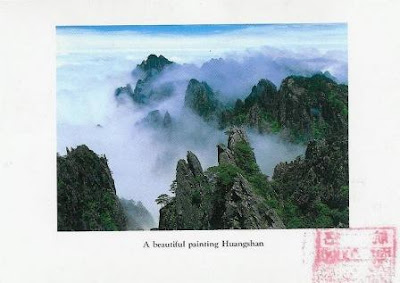 Mount Huangshan, often described as the “loveliest mountain of China”, has played an important role in the history of art and literature in China since the Tang Dynasty around the 8th century, when a legend dated from the year 747 described the mountain as the place of discovery of the long-sought elixir of immortality. 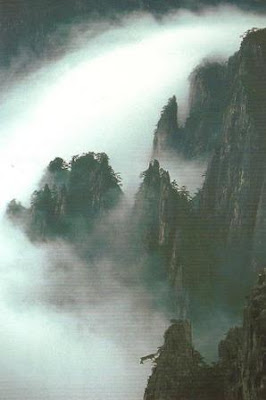 This legend gave Mount Huangshan its name and assured its place in Chinese history.  Mount Huangshan became a magnet for hermits, poets and landscape artists, fascinated by its dramatic mountainous landscape consisting of numerous granitic peaks, many over 1,000 m high, emerging through a perpetual  sea of clouds.  During the Ming Dynasty from around the 16th century, this landscape and its numerous grotesquely-shaped rocks and ancient, gnarled trees inspired the influential Shanshui (“Mountain and Water”) school of landscape painting, providing a fundamental representation of the oriental landscape in the world’s imagination and art. 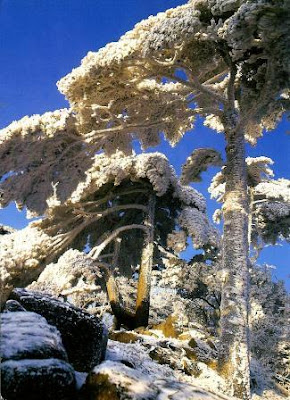 CN-1715633, sent by Carol.
The property, located in the humid subtropical monsoon climate zone of China’s Anhui Province and covering an area of 15,400 ha with a buffer zone of 14,200 ha, is also of outstanding importance for its botanical richness and for the conservation of a number of locally or nationally endemic plant species, some of which are threatened with extinction. - in: http://whc.unesco.org/en/list/547 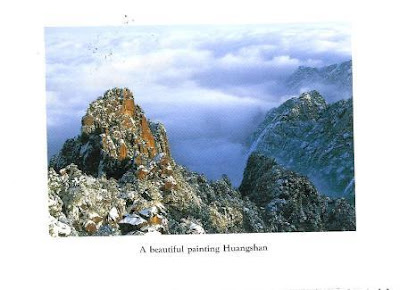 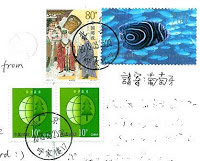 CN-881756, sent by Abay.
Celestial Capital Peak, also known as Tiandu Peak, with 1.830 meters high, is one of the three major peaks of Mt. Huangshan.
The climb, dangerous in the old days, is a "walk-over", with stone steps placed or hewn along the trail and iron chains to cling to. Now 43,000 steps link all the peaks and a winding path 3,800 meters long has been paved for the convenience of tourists. The peak is over 5900, is one of the steepest and most breathtaking peaks of Mount Huang. At the top of the peak is a stone carving of 4 Chinese characters "Deng Feng Zao Ji" (the highest peak), as the peak surpasses the others in the surrounding area. 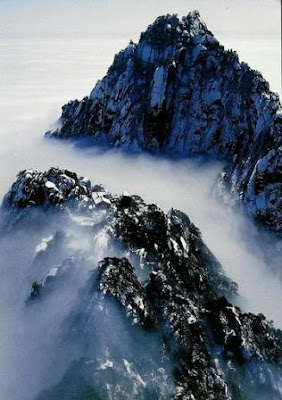 A traveler in old times that failed to reach the top sighed as he composed this poem:
“How I wish I could ride a crane some day to view the sea of clouds over Tiandu Peak.”
The top of the peak is flat with a natural cave large enough to hold more than one hundred people. The saying goes: “Without reaching Jade Screen Pavilion, a panoramic view of the mountain is impossible; without climbing Tiandu Peak, your trip is in vain”." - in: http://www.china-tour.cn/Huangshan/Tiandu-Peak.htm
By Martinha at 11:18 1 comment:

India has 32 sites inscribed on the UNESCO WHS list and now, with this card from Manas National Park, sent by K. R. Bhat, I've cards from all the sites. It wasn't easy but its done!!
This not so friendly looking animal is a golden langur, one of the rare and endangered endemic wildlife species in the park. It is one of the most endangered primate species of India. Long considered sacred by many Himalayan people, the golden langur was first brought to the attention of the western world by the naturalist E. P. Gee in the 1950s. - in: wikipedia 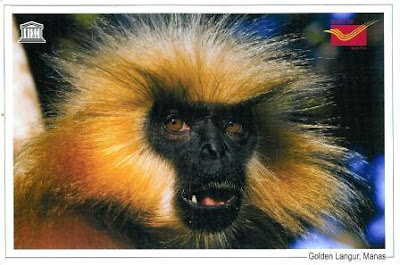 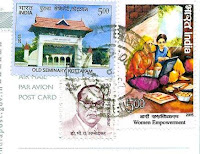 Manas National Park, located in the northeastern state of Assam covers an area of 50.000 hectares in the plains of the Mana River in the Himalayan foothills.. It is a National Park, UNESCO Natural World Heritage site, a Project Tiger Reserve, an Elephant Reserve and a Biosphere Reserve.
Besides de golden langur, the park is also home to a great variety of wildlife, including many endangered species, such as the tiger, pygmy hog, Indian rhinoceros, Indian elephant, Assam Roofed Turtle, Hispid Hare, clouded leopard, sloth bear, bengal florican and wild water buffalo.
By Martinha at 10:18 No comments:

Every card from a new Unesco site is very much appreciated and even more when they come from not so easy to get places. This one is from Oman and it shows the historic fort of Bahla.
The card was sent by Cristina.

Bahla Fort is situated at the foot of the Djebel Akhdar highlands in Oman. It was built in the 13th and 14th centuries, when the oasis of Bahla was prosperous under the control of the Banu Nebhan tribe. 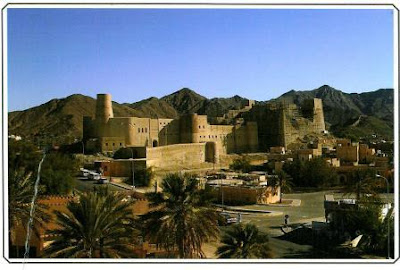 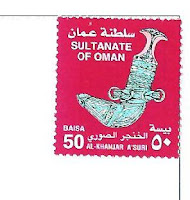 The fort's ruined adobe walls and towers rise some 165 feet above its sandstone foundations.
The fort was not restored or conserved before 1987, and had fallen into a parlous state, with parts of the walls collapsing each year in the rainy season.
The fort became a UNESCO World Heritage Site in 1987. It was included in the List of World Heritage in Danger from 1988. Restoration works began in the 1990s, and nearly $9m were spent by the Omani government from 1993 to 1999. It remained covered with scaffolding and closed to tourists for many years. It was removed from the list of endangered sites in 2004. - in: wikipedia
By Martinha at 11:08 No comments: