Also from Estonia, and also sent my Martiina, now i've this card of the ruins of the Viljandi Order Castle. 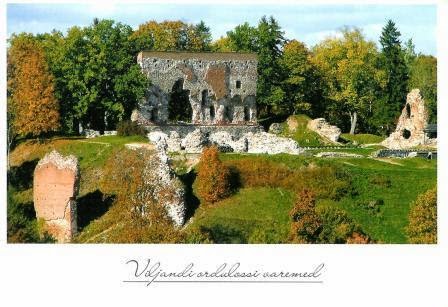 Foto: Anu Kivi
The stone castle started to appear on the place of the former Estonian stronghold in 1224. The fortress got its final shape and size in the beginning of the 16th century and was one of the distinguished fortresses in Estonia and Latvia. Due to wars between Sweden, Poland and Russia all that is left from the entire order castle today are just a few stone walls.
Already in the beginning of the last century the ruins of the fortress and the park around it turned into a recreational area for the residents of Viljandi. In order to access the castle hills from town a rope bridge was build from the Kaeuvumägi hill over the 13 meters deep trench in 1931. - in: http://www.visitestonia.com/en/ruins-of-the-viljandi-order-castle
By Martinha at 11:29 No comments:

A favorite from Estonia, sent by Martiina, that took almost 2 months to reach my mailbox!! 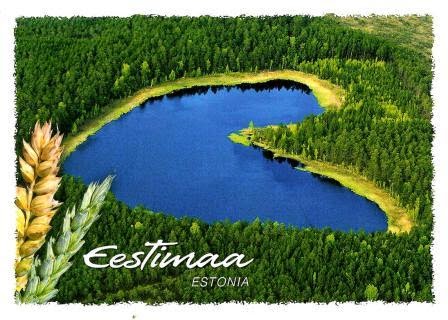 This the famous heart shaped Lake Väikejärv, located in the Viljandi County.
By Martinha at 11:25 No comments:

This is my 1st card from Jersey, one of the two Channel Islands, the other is Guerney. Laerke was there a couple of weeks ago and sent be this card of the Noirmont point lighthouse.
The Channel Islands are an archipelago of British Crown Dependencies in the English Channel, off the French coast of Normandy. They are considered the remnants of the Duchy of Normandy, and are not part of the United Kingdom. - in: wikipedia 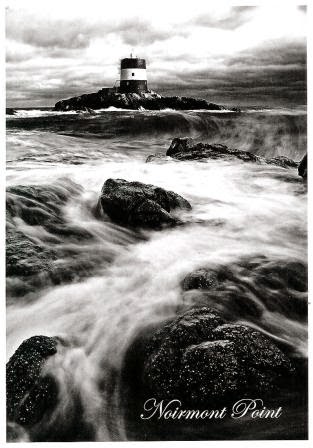 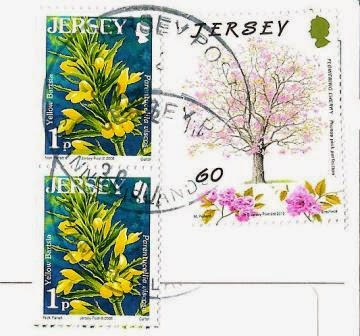 Noirmont Point is the most southerly headland in Jersey.

Noirmont Point and a substantial part of the headland behind it was acquired by the States in 1950 as the Island's war memorial. And it is a strange irony given its status as a memorial of a war in which Jersey was occupied by the Germans for five years, that probably the main reason for visiting the headland is to view the restored bunkers and gun emplacements of Batterie Lothringen, the only naval coastal artillery battery in the island and part of Hitler's infamous Atlantic Wall. - in: http://www.theislandwiki.org/index.php/Noirmont
The lighthouse is from 1915 and is still active.
By Martinha at 16:14 No comments:

My officials have been travelling for quite some time, sometimes more than a month but in the 2 last days a few of them were registered. I hope this is a sign that things are getting better. 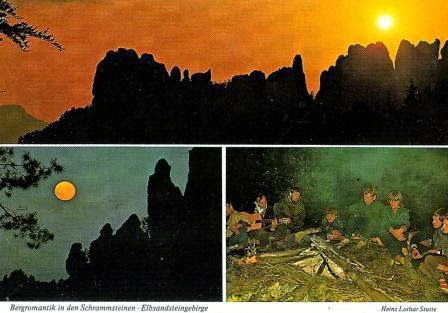 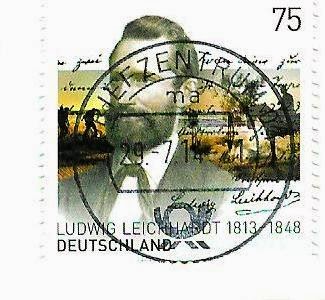 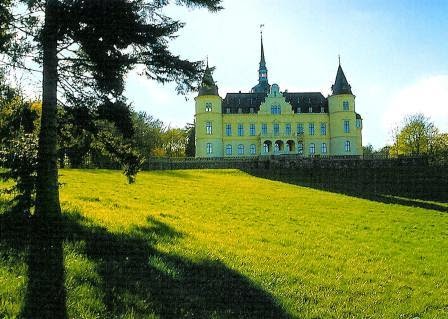 DE-3372629, sent by Julia.
This is the Ralswiek Palace in Rugen Island.
Schloss Ralswiek sits on a location occupied by noble families since the Middle Ages. Today’s neo-Renaissance schloss dates from 1891 and was designed to resemble a French Renaissance château.
The estate was built by Hugo Sholto Douglas, earl of Douglas. Of Scottish ancestry, he made his fortune by mining in Germany. He fought in the Franco-Prussian War of 1870 and was awarded the Iron Cross.
The schloss was confiscated from the Douglas family after World War II and turned into a nursing home and home for the handicapped for the German Red Cross.
In 1999, renovations began for its new life as a hotel, finally opening its doors to guests in 2002. - in: http://castleandpalacehotels.com/countries/germany/germany_regions/mecklenburg_western_pomerania/ralswiek.html 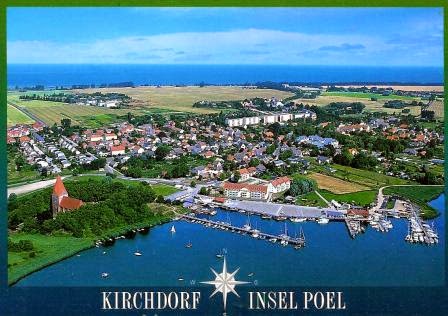 DE-3395329, sent by Bernhard.
A view of Kirchdorf, a village on the Poel Island, a german island in the Baltic Sea. It covers an area of 36.02 km² and has 2873 citizens. Satellite pictures show that most of it is used as farmland. With its good air, clean water, fine beaches and sheltered harbours, it is also popular recreational area. - in: wikipedia 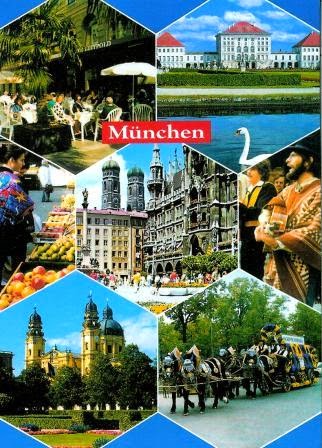 I had a great mail day yesterday, 5 cards and a big stationery package from Netherlands. One of the cards was this one from Italy, a new UNESCO site in my collection. I only need 2 more cards to have cards from 800 UNESCO sites and I took care of that yesterday. In a few days I'll get 5 new sites from 3 african countries. I can't wait to get them.
But for now, I've this card from the Vineyard Landscape of Piedmont: Langhe-Roero and Monferrato, which includes 6 separate areas: Langa of Barolo, Grinzane Cavour Castle, Hills of Barbaresco, Nizza Monferrato and Barbera, Canelli and Asti Spumante and Monferrato of the Inferot. Vignale Monferrato is a town located in Monferrato of the Inferot.
This is Italy's 50th UNESCO site and the card was sent by Marina. 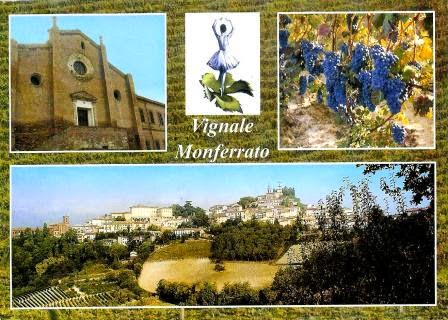 This landscape covers five distinct wine-growing areas with outstanding landscapes and the Castle of Cavour, an emblematic name both in the development of vineyards and in Italian history. It is located in the southern part of Piedmont, between the Po River and the Ligurian Apennines, and encompasses the whole range of technical and economic processes relating to the winegrowing and winemaking that has characterized the region for centuries. Vine pollen has been found in the area dating from the 5th century BC, when Piedmont was a place of contact and trade between the Etruscans and the Celts; Etruscan and Celtic words, particularly wine-related ones, are still found in the local dialect. During the Roman Empire, Pliny the Elder mentions the Piedmont region as being one of the most favourable for growing vines in ancient Italy; Strabo mentions its barrels. - in: http://whc.unesco.org/en/list/1390
By Martinha at 18:58 No comments:

Last week Óscar sent me this card thinking about my old people collection. 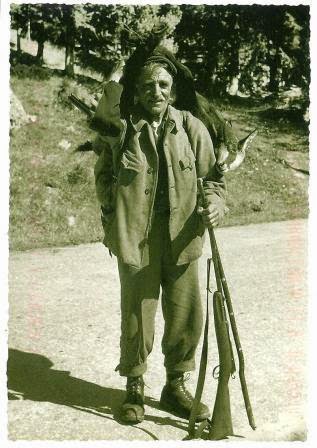 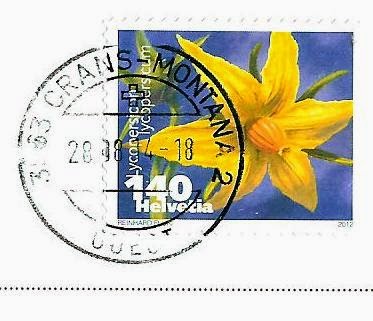 It looks like this old men went hunting and its possible because most of the swiss federal hunting reserves are located in the canton of Valais, where this card is from.
By Martinha at 20:50 No comments:

An official from Paris with a picture taken by Anna, the sender of the card.

Now France's most instantly recognizable landmark, the Eiffel Tower was built in Paris during 1887-1889 by Gustave Eiffel (1832-1923), a French engineer, for the 100th anniversary of the French Revolution.
For this momentous occasion, for which a huge exhibition, Exposition Universelle, was planned, Eiffel wished to erect something extraordinary made from modern materials.
His design, a structure of wrought iron ribs, held together by rivets and resting on a solid masonry foundation, was initially denounced by some as a "tragic lamppost," but its elegance has come to be recognized by most. 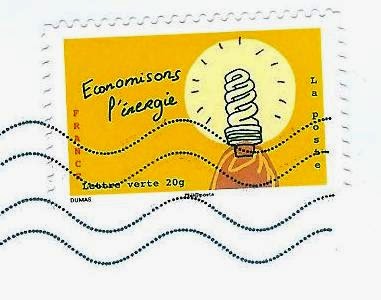 Last month João went on an European road trip but the trip was interrupted by an unfortunate event. After suffering for a couple of weeks, the worst seems to be over and João can finally breathe again. I really hope things keep getting better.
Before the interruption of the trip, João sent me this card of the Joux Castle in France. 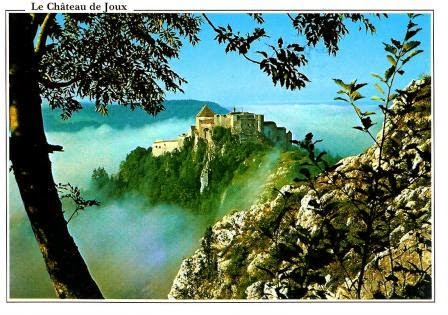 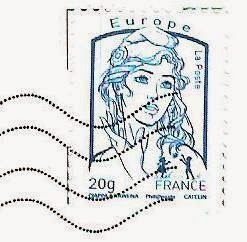 Joux Castle is a castle, transformed into a fort, located in La Cluse-et-Mijoux, in the Doubs department, in the Jura mountains of France.
The Jura Mountains are a small mountain range located north of the Alps, separating the Rhine and Rhone rivers and forming part of the watershed of each. The mountain range is located in France, Switzerland and Germany.
First built in wood in the 11th century, the castle was rebuilt in stone in the next century. After passing into the hands of the Ducjy of Burgundy, then of the Habsburgs Empire, a new fortress was planned by Vauban, Louis XIV's celebrated military architect, in 1690.
During the 18th and 19th centuries, including the French Revolutionary period, the fortress was used as a state prison, among whose most famous residents were Mirabeau, André Rigaud, Heinrich von Kleist and Toussaint Louverture (who died there from cold and malnutrition).
In 1879, Captain (later General) Joffre, then a military engineering officer, modernises the citadel by installing casemates that could accommodate 155 mm cannons, the largest pieces of artillery at the time.
The fortress currently houses a museum of arms that exhibits more than 600 rare weapons dating from the early 18th to the 20th centuries. - in: http://www.eupedia.com/france/joux_castle.shtml
By Martinha at 21:40 No comments:

If I'm not mistaken, this year was the 10th time Cristina visited Taizé, I believe this village is her special place. She usually sends me a card from there and these are just 3 of them. The 1st of these 3 arrive a few days ago and the other arrived in 2013 and 2010. 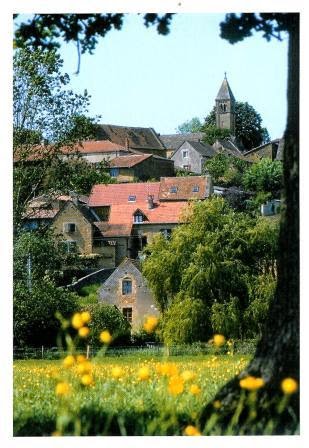 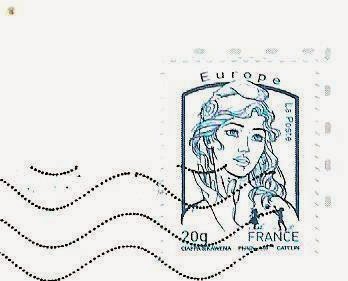 Taizé is a commune in the Saône-et-Loire department in the region of Bourgogne in eastern France.
In Taizé lives the Taizé Community, a monastic, ecumenical, international community founded in 1940 by Frère Roger.
Taizé is also known as a place of pilgrimage primarily for young adults: every week, hundreds and thousands of visitors, generally between the ages of 17 and 30, visit Taizé for an experience of prayer and community life. - in: wikipedia 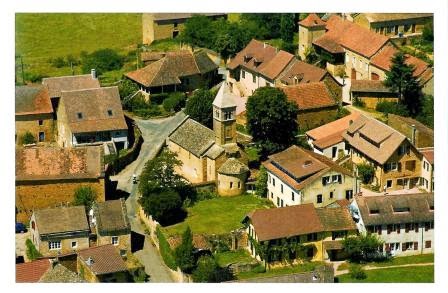 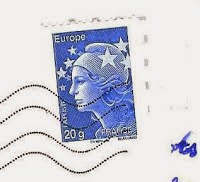 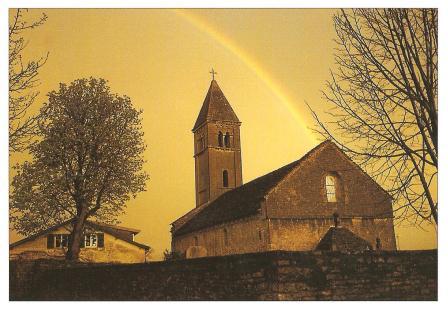 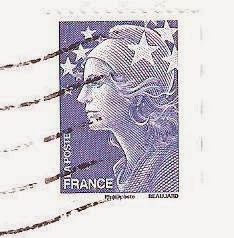 Sainte Marie Madeleine is a typical Burgundian Romanesque church. Its layout and architecture are simple. The bell tower is over the crossing. The bell tower also has Lombard Bands and arches on the windows. This is typical for a Romanesque church in Burgundy.
Sainte Marie Madeleine is a small church with few windows which means that the inside is rather dark. The church is surrounded on two sides by a cemetery." - in: http://www.americansinfrance.net/attractions/Taize.cfm
By Martinha at 21:52 No comments:

Soubise isn't only an onion sauce, is also the name of a town in the Charente-Maritime department in southwestern France. 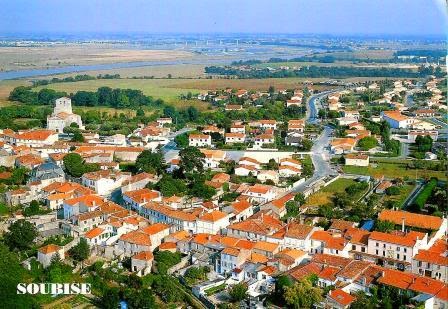 I didn't find much about this small town. 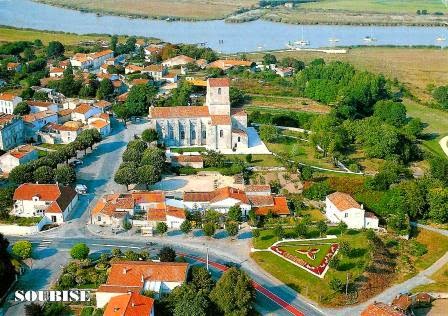 The local church was originally a romanesque constrution but after its destrution it was rebuilt in gothic style.
By Martinha at 21:22 No comments:

I try to visit a new country every year and last year the new country on my list was Andorra. I bought a lot of cards there but these three are part of the 240 postcards offer from Paulo. 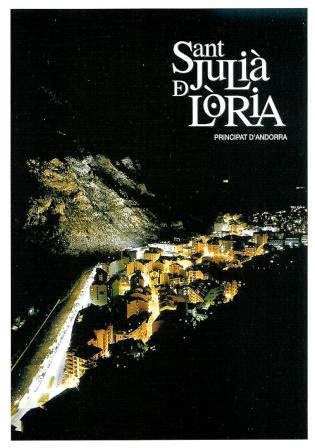 Sant Julià de Lòria is one of the parishes of Andorra, in the far south of that country. It is also the name of the main town of the parish, which at 908 m is the lowest settlement in Andorra. 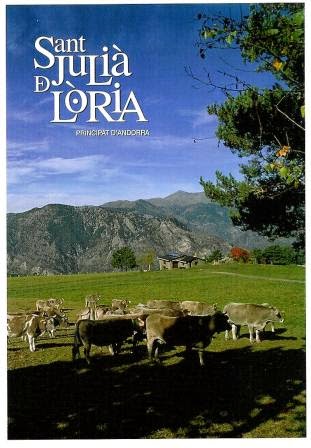 Sant Julià perfectly combines nature and rest thanks to its wide range of sports and cultural offers. 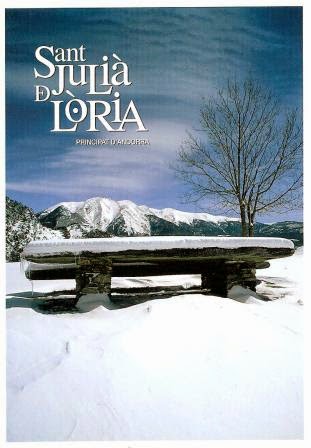 Beeing the lowest settlement in Andorra, Sant Julià enjoys a more temperate weather, with less harsh winters, compared to the other parishes of the Principality.
By Martinha at 14:53 No comments:

Zé sent me this card of the Monterreal Castle in Baiona, a city in Galicia, northwest Spain. 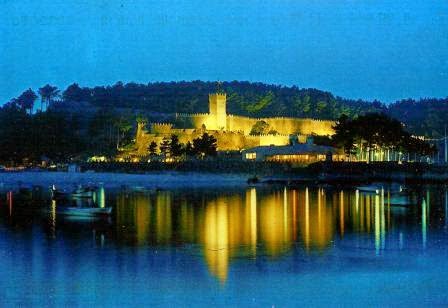 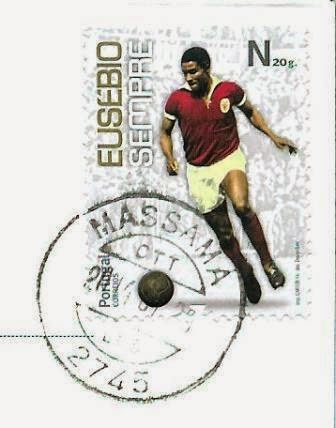 Monterreal castle was built between the 12th and 16th centuries. For centuries it protect Baiona from its enemies and pirates but now it receives tourists from all over the world as the castle is now one of Spain's most popular paradores, a kind of luxury hotel, usually located in a historic building such as a monastery or castle.
When Columbus's Pinta landed here in 1492, Baiona became the first town in Europe to receive the news of the discovery of the New World.
By Martinha at 14:35 No comments: