After the UE and Croatian flags, now I've the Japanese flag. This makes a total of 11 flags in my FOTW collection. 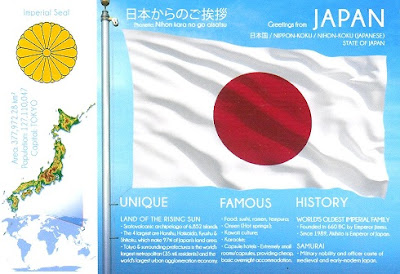 JP-1514191, sent by reoreo.
Japan has an area of 377.972.28 km², a population of 127.110.047 and its capital is Tokyo.
Unique:
* Land of the rising sun - stratovolcanic archipelago 0f 6852 islands. The largest are Honshu, Hokkaido, Kyushu and Shikoku, which make 97% of Japan's land area;
* Tokyo and surrounding prefectures is the world's largest metropolitan are (35 mil. residents) and the world's largest urban agglomeration economy:
Famous:
* Food: sushi, ramen, tempura;
* Onsen (hot springs);
* Kawaii culture;
* Karaoke;
* Capsule hotels: extremely small rooms/capsules, providing cheap, basic overnight accomodation;
History:
* World's oldest imperial family - founded in 660 BC by Emperor Jimmu;
* Since 1989, Akihito is the Emperor of Japan;
* Samurai - Military nobility and officer caste of medieval and early-modern Japan.
By Martinha at 22:29 No comments: 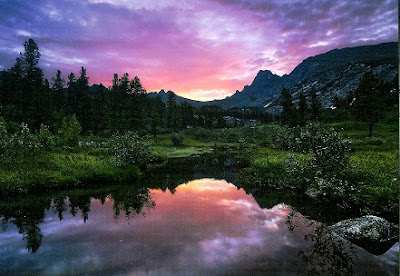 RU-8433487, sent by Sasha.
Ergaki Nature Park located in the Western Sayan Mountains in southern Siberia is an absolute “must see” sight in Russia often called ‘Russian Yosemite’.
Ergaki nature Park is one of the most popular destinations of Siberia known for its fairy tale beauty and unparallel environment for outdoor activities such as hiking, camping, climbing, bouldering and horseback riding in summer and snowboarding alongside with cross-country and alpine skiing in winter season.
It protects more than 3420 km2 of virgin wilderness, with mountainous terrain, numerous lakes, dense coniferous forest and alpine landscapes. The Park is located at the junction of Siberian mountainous taiga and dry continental steppes of Central Asia and is known for its spectacular landscapes and rich biodiversity.
The characteristic feature of the Park is its rugged terrain boasting steep mountains reaching an elevation of 2466 meters above sealevel (Aradansky peak) and low-lying Us river valley (700 m). By the way, river Us is the mightiest river in the Park. - in: http://www.ergaki-park.ru
By Martinha at 21:52 No comments:

An official from Russia but the card is actually from Abkhazia, an autonomous republic in the northwestern corner of Georgia. This region declared independence in 1999 but only a few countries, most notably Russia, recognize its independence.
Lake Mzy is one of the great natural attractions of Abkhazia. 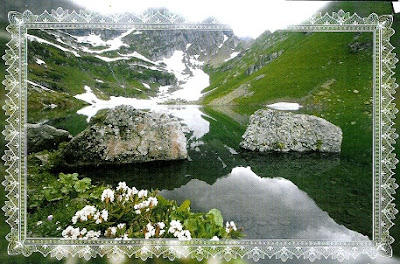 RU-8433495, sent by Julia.
Mzy lake is located high in the Caucasus Mountains at an altitude of 2000 meters above sea level. Its size is small, only 100 to 45 meters, but the depth of as much as 40 meters (according to other sources 16 meters). It is formed from the waters of the melting glaciers, so the size and temperature depends on the time of year.
By Martinha at 22:35 No comments:

In the last weeks I've got new FOTW cards. One of the newest is this one from Republika Hrvatska, Republic of Croatia.
The card was sent by Anja. 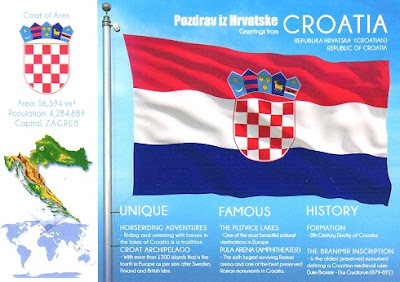 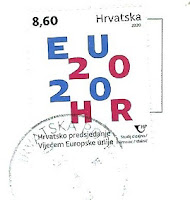 Croatia has an area of 56.594 km², a population of 4.284.889 and its capital is Zagreb.
Unique:
* Horseriding adventures - riding and swimming with horses in the lakes of Croatia is a tradition;
* Croat Archipelago - with more than 1200 islands, that is the 4th in Europe as per size after Sweden, Finland and the British Isles;
Famous:
* The Plitvice Lakes - one of the most beautiful natural landscapes in Europe;
* Pula Arena (Amphitheater) - the 6th largest surviving Roman arena and one of the best preserved Roman monuments in Croatia;
History:
* Formation: 8th century, Duchy of Croatia;
* The Branimir Inscription - is the oldest preserved monument defining a Croatian medieval ruler, Duke Branimir - Dux Cruatarvm.
By Martinha at 18:13 No comments:

Guarda, my beloved city. Love it ❤ I really like when friends of mine come to visit the city and when possible, I like to be their guide. The last friend who visited the city was Tiago but the promised guided tour ended up being shorter than expected because of the rain.
Tiago sent me the 1st of these cards but it took quite some time to get to my mailbox. He sent it on April 27th, the day he left the city, the postmark date is 3rd of May and I only received it on the 5th !!! I feel like saying a lot but is probably better to make no comments, except to thank Tiago once again for the postcard. 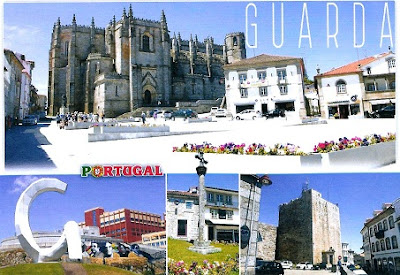 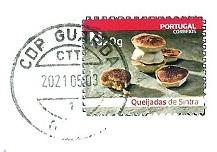 Besides the Luís de Camões Square, also known as Old Square, with our beautiful cathedral, thos card also depicts the G roundabout, a pillory and one of the gates of the city, Ferreiros (blacksmiths) Tower.
Guarda, the highest city in Portugal, it is chilly and windswept all year round and offers superb views. The city was founded in 1197 by Dom Sancho I to guard his borders against both Moors and Spaniards, and though the castle and walls have all but disappeared, its streets and little squares are uniquely picturesque. - in: https://portugal.com 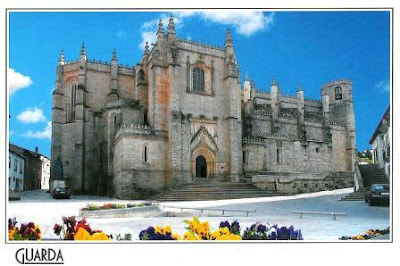 Photo by A. Pinto 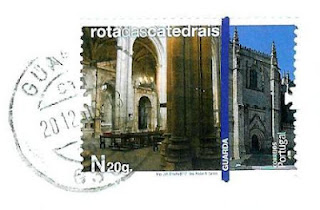 Back in 2012 I've sent this card to myself because I wanted to use a macthing stamp.
The mediaeval Catedral da Guarda  is a historical religious building in Guarda, in Northeastern Portugal. Its construction took from 1390 until the mid 16th century, combining Gothic and Manueline styles.
The History of Guarda Cathedral begins in 1199, when King Sancho I obtained permission from the Pope to transfer the seat of the bishopric from nearby Egitania (Idanha-a-Velha) to Guarda.
Two other cathedrals were built before the actual one and both were destroyed.

The third and definitive Guarda Cathedral started being built in 1390 under bishop Vasco de Lamego, during the reign of King John I. In the early 15th century the apse was built and the nave was begun in Gothic style. In this first stage the works were influenced by the Monastery of Batalha, which was being built at the same time. Construction on the Cathedral proceeded slowly during the second half of the century.
In the period from 1504 to 1517, under bishop Pedro Gavião, the pace of the works increased and the cathedral was almost completed. The architects of this phase were 'Pedro and Felipe Henriques. The Manueline style - a Portuguese mix of Gothic and early Renaissance - was the dominant influence in this second building stage, as attested by the decoration of the windows of the nave and transept, the decorated rib vaulting of the transept, some spiralling columns of the nave as well as the main portal, similar to the Manueline portal of Saint Michael's Chapel of Coimbra University.
Most building activity in Guarda Cathedral was finished around 1540.
During the following centuries the cathedral was enriched with other elements. Despite the artistic value of some of these additions - like the Baroque organ - all were removed during a renovation carried out in 1898 by architect Rosendo Carvalheira, which aimed at restoring the cathedral to its primitive, Gothic/Manueline appearance. - in: wikipedia
By Martinha at 23:17 No comments:

New month and hopefully many cards will fill my mailbox.
Great views and new addictions to my collections. 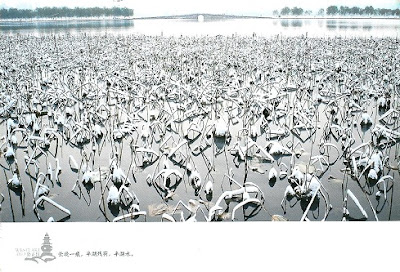 Linda sent me a nice snowy view of West Lake.
West Lake is an iconic, symbolic sight in Hangzhou and is regarded as one of the most beautiful sights in China. Its beauty is the subject of many poems and paintings.
Nowadays, West Lake is one of the top ten scenic areas in China, getting listed as a World Cultural Heritage Site by UNESCO in 2011. It is famous for the romantic legends and intoxicating scenery. 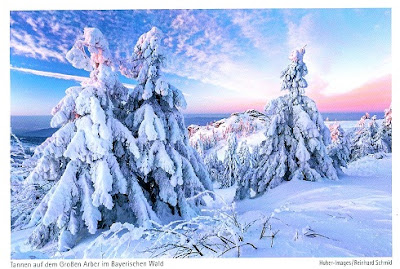 What an amazing snowy landscape. Love the snow, the trees, the colors, everything. Tanja, you nailed it!!
This is a view in the Großer Arber, the highest peak of the Bavarian/Bohemian Forest mountain range and in Lower Bavaria. 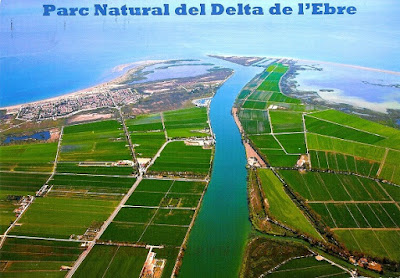 The Ebro Delta Natural Park is the largest protected wetland in Catalonia. In total, 7,736 hectares where rice fields charge a different colour depending on the time of year we are, and become a pole of attraction of a rich flora and fauna.
More than 800 different species of flora, where the hurdles, the reeds, the eucalyptus trees and the river honeysuckles stand out. Much of this vegetation has had to adapt to extreme conditions and colonize dunes, saline soils or lagoon areas. The wildlife of the Delta, basically birds, attracts birdwatchers (observació d'aus) around the world. In fact, between 50,000 and 100,000 specimens of exactly 343 species of birds are quantified. - in: https://terresdelebre.travel
Card sent by Yolanda. 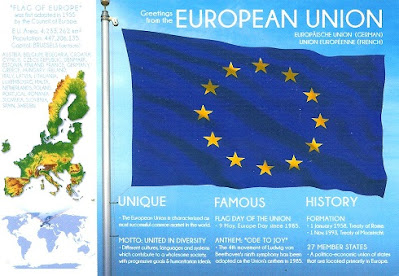 Edith noticed that I still didn't have the EU flag and sent me this updated version. Look at the map, UK isn't there anymore. It kinda look a bit weird to look at the map and don't see UK there.
Flag of Europe was first adopted in 1955 by the Council of Europe.
EU has an area of 4.233.262 km², a population of 447.206.135 and its capital is Brussels (de facto).
The state members are: Austria, Belgium, Bulgaria, Croatia, Cyprus, Czech Republic, Denmark, Estonia, Finland, France, Germany, Greece, Hungary, Ireland, Italy, Latvia, Lithuania, Luxembourg, Malta, Netherlands, Poland, Portugal, Romania, Slovakia, Slovenia, Spain, Sweden.
Unique:
* The European Union is caracterized as most successful common market in the world;
* Motto - United in Diversity: Different cultures, languages and systems which contribute to a wholesome society, with progressive goals and humanitarian idelas;
Famous:
* Flag Day of the Union - 9 May, Europe Day since 1985;
* Anthem; "Ode to Joy" - The 4th movement of Ludwig van Beethoven's ninth simphony has been adopted as the Union's anthem in 1985;
History:
* Formation: 1 January 1958 - Treaty of Rome. 1 November 1993 - Treatry of Maastricht;
* 27 Member States - A politico-economic union of states that are located primarily in Europe.
By Martinha at 22:49 No comments: