Updates and downgrades and I have been unable to enter the blog through my pc for more than a month. There's another computer in the house but let's say it is not the same thing as using our own computer. I guess I won't be posting much the near future. And I have so many postcards to show!
When it comes to the portuguese RR cards, these are from July, sent by Patrícia, Óscar and Paula. 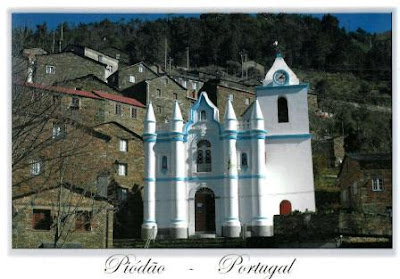 The picturesque little village of Piodão clings to a steeply terraced mountainside deep within the foothills of the Serra de Açor range in central Portugal.
Until the 1970s it was one of the remotest areas in Portugal and  the only way to reach Piodão was on foot or by horse.
Amongst the schist houses, with their schist tiled roofs, and the schist cobbled alleyways there is one building that instantly stands out - the parish church. Not only does it stand out for being the only whitewashed building in a sea of greys, it is quite an unusual building in its own right. The facade has four cone-topped cylindrical buttresses which give it something of a Disney castle look. Dating back to the early 1800s the church was funded by the inhabitants of the village and built on the site of a former chapel. - in: https://www.travel-in-portugal.com/piodao 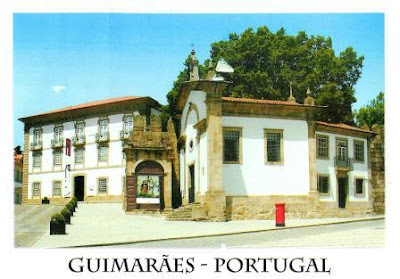 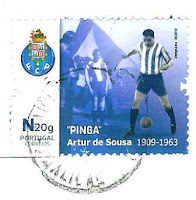 I've been to Guimarães twice lst year but didn't get to visit the Alberto Sampaio Museum.
The Alberto Sampaio Museum was founded in 1928 to house the art and other objects belonging to the former Collegiate Church of Nossa Senhora da Oliveira and other churches and convents in Guimarães. It is situated in the heart of the old historic centre of the city, which has been classified as World Heritage, on the site where the Countess Mumadona ordered the construction of a monastery in the 10th century.
The museum is housed in three areas that once belonged to the Collegiate Church of Nossa Senhora da Oliveira: the Chapter House, the Cloister and the Priory. The Cloister is an unusual example of Portuguese architecture, both in the way it was constructed around the apse of the church and its irregular shape.
The Alberto Sampaio Museum contains collections of great interest. Of particular note is the sculpture composed of statues from the 13th to the 18th century, made from both limestone and wood. In the collection of woodcarvings, the 17th-century altarpiece that belonged to the Brotherhood of St. Peter and the baroque supports from the church of the Convent of Santa Clara are particularly outstanding. Painting is represented by some remarkable frescoes and painted panels. The display of ceramics is composed of tiles and faience. The textile section is composed of ecclesiastical vestments and an important collection of samples of different cloths.
One of the museum’s most famous pieces is the tunic worn by Dom João I at the Battle of Aljubarrota. Finally, amongst the varied collection of gold and silverware, attention is drawn to the treasury of Nossa Senhora da Oliveira: a series of liturgical instruments (chalices, patens, monstrances, crosses and reliquaries) dating from the 12th to the 19th century. - in: https://www.visitportugal.com 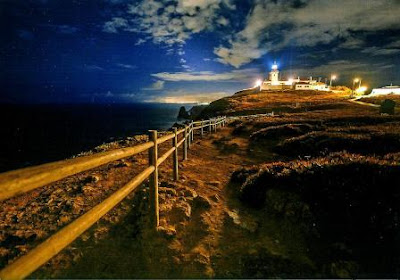 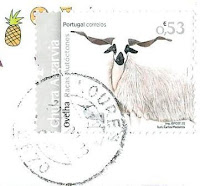 Located at latitude 38º 47´north and longitude 9º 30´west, Cabo da Roca is an important coordinate for those sailing along the coast, as it is the most westerly point of mainland Europe, a fact borne out by the certificates that visitors take away as a souvenir.
Around 150 metres above the sea, here you can have a panoramic view over the Serra de Sintra and the coast, which makes it worth the visit.
Historical records indicate that there was a fort on Cabo da Roca in the 17th century that played an important part in guarding the entrance to Lisbon’s harbour, forming a defensive line along the coast, especially during the Peninsular Wars. Today there are only traces, as well as the lighthouse which is still an important point for navigation. - in: https://www.visitportugal.com
By Martinha at 10:46 No comments: