My 1st official card from Turkey. 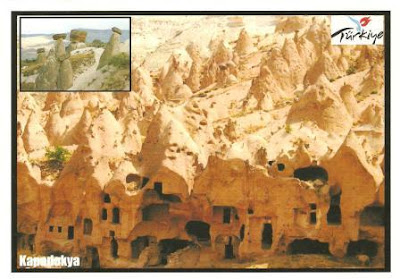 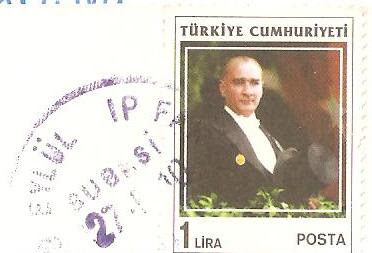 TR-36930, sent by Zeynep.
"Cappadocia is a region in central Turkey, largely in Nevsehir Province.
The area is a famous and popular tourist destination, as it has many areas with unique geological, historic and cultural features.
The region is located southwest of the major city Kayseri, which has airline and railroad service to Ankara and Istanbul.
The Cappadocia region is largely underlain by sedimentary rocks formed in lakes and streams, and ignimbrite deposits erupted from ancient volcanoes approximately 9 to 3 million years ago, during the late Miocene to Pliocene epochs. The rocks of Cappadocia near Göreme eroded into hundreds of spectacular pillars and minaret-like forms. The volcanic deposits are soft rocks that the people of the villages at the heart of the Cappadocia Region carved out to form houses, churches and monasteries." - in: wikipedia
By Martinha at 23:38