The Königssee is Germany's third deepest lake. It is located in the state of Bavaria, near the border with Austria. Large parts are comprised by the Berchtesgaden National Park. This card was sent by Sandra. 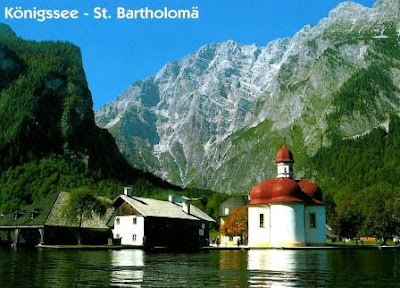 The lake is noted for its clear water and is advertised as the cleanest lake in Germany. For this reason, only electric driven passenger ships, rowing and pedal boats have been permitted on the lake since 1909. Due to its picturesque setting, the lake and surrounding parklands are very popular with tourists and hikers. In addition, the lake's position surrounded by sheer rock walls creates an echo, which is known for its clarity. On boat tours, it has become traditional to stop and play a flugelhorn or trumpet to display the echo; formerly demonstrated by shooting a cannon, it could be heard reflected up to seven times. - in: wikipedia

St. Bartholomä, a famous pilgrimage church, originally dating back to the 12th century. It can only be reached by boat. Neighboring the chapel stands the former hunting lodge of Berchtesgaden's provosts and Bavaria's kings, today an idyllic location for an inn.