I'm not fond of this postcard design but Scrovegni Chapel was a UNESCO site missing in my collection and I'm happy to have it now.
The card was sent by Isabella.
A few months ago the chapel was declared part of the UNESCO World Heritage Site of the 14th-century fresco cycles comprehending 8 historical buildings in Padua city centre. Specifically the Scrovegni Chapel contains the most important frescoes that marked the beginning of a revolution in mural painting and influenced fresco technique, style, and content for a whole century. - in: wikipedia 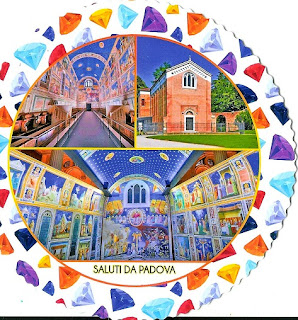 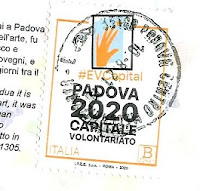 The Scrovegni Chapel, dedicated to St. Mary of the Charity, frescoed between 1303 and 1305 by Giotto, upon the commission of Enrico degli Scrovegni, is one of the most important masterpieces of Western art. The frescoes, which narrate events in the lives of the Virgin Mary and Christ, cover the entire walls. On the wall opposite the altar is the grandiose Universal Judgement, which concludes the story of human salvation.
The chapel was originally attached to the Scrovegni family palace, built after 1300, following the elliptical outline of the remains of the Roman arena.
The Chapel was acquired by the City of Padova in1880, and the vulnerable frescoes were subjected to several specialized restoration operations during the 19th and 20th centuries. - in: http://www.cappelladegliscrovegni.it
By Martinha at 16:19