One more unesco card. This one is from Spain and it was sent by Joana "joaninha".

"The Royal Monastery of Santa Maria de Guadalupe is a Roman Catholic monastic establishment in Guadalupe, Cáceres province of the Extremadura autonomous community of Spain; it was the most important monastery in the country for more than four centuries. It is protected by the Unesco as a World Heritage Site. 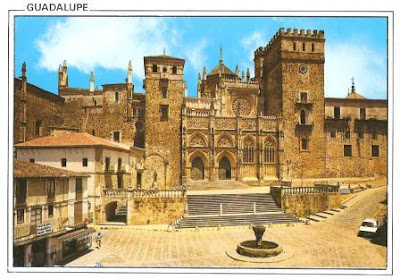 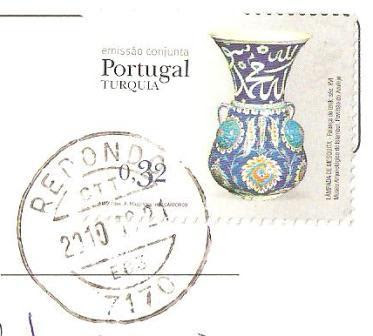 "The monastery had its origins in the late 13th century, when a shepherd from Cáceres, named Gil Cordero, discovered on the bank of the Guadalupe River a statue of Madonna, which had been apparently hidden by local inhabitants from Moorish invaders in 714. On the site of his discovery a chapel was built.

King Alfosno XI, who visited the chapel more than once, invoked Santa Maria de Guadalupe in the Battle of Rio Salado. After gaining the victory, he ascribed it to the Madonna's intercession, declared the church at Guadalupe a royal sanctuary and undertook an extensive rebuilding program.

The monastery is rich in associations with the New World, where Our Lady of Guadalupe is highly revered in the Mexican Basilica of Guadalupe and elsewhere. It was here, in Extremadura, that Christopher Columbus made his first pilgrimage after discovering America in 1492 and it was here that he first thanked heaven for his discovery.

Even after the monks from Guadalupe founded the famous monastery of Escorial, which was much closer to the royal capital, Madrid, Santa Maria de Guadalupe retained the royal patronage. It remained the most important cloister in Spain until the secularization of monasteries in 1835. In the 20th century, the monastery was revived by the Franciscan Order and Pope Pius XII declared the shrine a "Minor Papal Basilica" in 1955." - in: wikipedia

One more of my trips :) i really like visit Spain