I really like this card from Thailand, it was one of my favorites. I think i like it because of the warrior. It was sent by Charlie "cherokee". 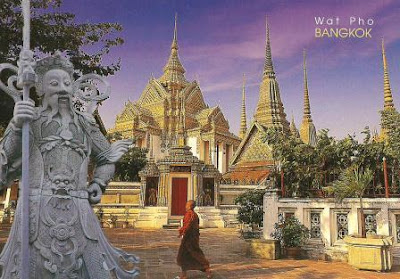 "Wat Pho, or the Temple of the Reclining Buddha, is the oldest and largest Buddhist temple in Bangkok. It is home to more Buddha images than any other Bangkok temple and it shelters the largest Buddha in Thailand.

Wat Pho was built as a restoration of an earlier temple on the same site, Wat Phodharam, with work beginning in 1788. It was restored and extended in the reign of King Rama III (1824-51), and restored again in 1982.

During the Rama III restoration plaques inscribed with medical texts were placed around the temple, while in 1962 a school for traditional medicine and massage was established." - in: www.sacred-destinations.com/thailand/bangkok-wat-pho

That is such a cool card. Totally loved it :)