Paula also sent me a non Christmas card to wish me happy holidays. I believe that all the cards that I've posted from Church were about the roman bridge. Today I'm showing the city's parish church. 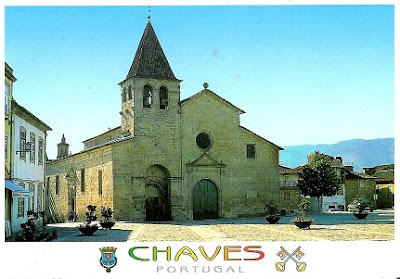 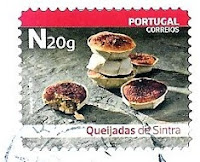 The historic Church of Santa Maria Maior (the Igreja Matriz or Parish Church) is located in the center of Chaves.
The original Romanesque church dates back to the mid-13th century and may even be 12th century and have been built over a previous Visigothic church, which was constructed over an even earlier Roman temple. The bell tower and Romanesque portal date from the 13th century.
In the 16th century the Church of Santa Maria Maior underwent major renovation which included the integration of two Mannerist (Late Renaissance) portals into the existing Romanesque structure, one on the main facade, crowned by a circular oculus (circular opening) crowned with an image of Christ and the other on the north side, surmounted by two medallions with the images of St. Paul and St. Peter. - in: https://www.portugalvisitor.com
By Martinha at 23:44