It is really great that when some objects, structures and buildings that no longer serve their original purpose, can be used in another way instead of being destroyed or abandoned. Brinkamahof Lighthouse, near Bremerhaven is now a residential building and pub. 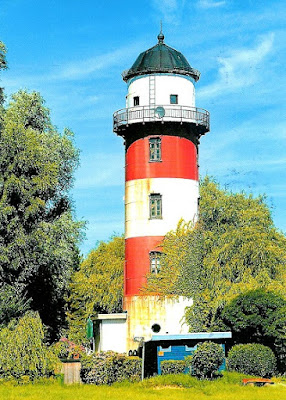 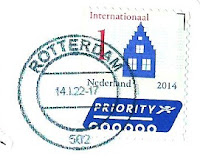 NL-5145605, sent by Annemieke and Sam.
The lighthouse was built in 1910/1911 and its’ original location was actually 6 kilometers north of Bremerhaven on the Wurster Watt. From 1911 - 1922 the lighthouse served as a direction light for the Wurster Arm waterway, 1922 - 1959 as a cross light for the transition from the Bremerhaven over to the Reedebaken lighthouse line as a result of the relocation of the waterway from Wurster Arm to the Fedderwarder Arm and 1959 - 1980 as a front light within the lighthouse line Weddewarden for the Fedderwarder waterway. With the Northern expansion of the Bremerhaven Container-Terminal the lighthouse had to be given up. With the help of the floating crane „Thor” the whole lighthouse was moved on August 19th, 1980 to the Nordsee-Yachting marina. Now the lighthouse is a landmark and a cozy pub in the marina. - in: https://www.bremerhaven.de
By Martinha at 22:43