When it comes to UNESCO places and cards, Bologna was one of my frustrations. I've been to the city, I've seen and walked under the porticoes but couldn't find any cards of them. Don't you hate when this happens? Almost 4 years after my visit to the city and 1 year after it's inscription on the World Heritage Site list, I finally have a card of the Porticoes of Bologna. Grazie Alessandro.
The porticoes of Bologna are a heritage of the city and one of its symbols.
The serial property comprises twelve component parts consisting of ensembles of porticoes and their surrounding built areas, located within the Municipality of Bologna from the 12th century to the present. These portico ensembles are considered to be the most representative among city’s porticoes, which cover a total stretch of 62 km. Some of the porticoes are built of wood, others of stone or brick, as well as reinforced concrete, covering roads, squares, paths and walkways, either on one or both sides of a street. - in: https://whc.unesco.org
For over ten centuries now, the porticos have been appreciated as sheltered walkways, as a meeting point, a place for aggregation and socialising for both locals and visitors, and it is precisely this social aspect that distinguishes these covered spaces, which were and still are privately owned for public use while being considered the most identifying feature of the city. 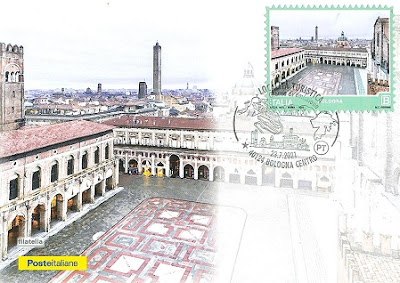 Pavaglione, Banchi and Piazza Maggiore are one of the 12 components of this site.
The Pavaglione (from 'Papilio', the name of the silkworm sold right under the portico in Piazza Maggiore) is undoubtedly Bologna's most iconic portico. Located in the eastern part of the square under the Palazzo dei Banchi, it was built in the 15th century with the dual function of dividing the elegant Renaissance square from the intricate, chaotic and odorous maze of streets of the "Quadrilatero" (the ancient medieval market) and  providing a suitable place for the city's bankers to conduct their business and set up money-changing desks in a city that had by then reached a decidedly cosmopolitan dimension, thanks to the presence of countless students from different European and international countries. - in: https://www.bolognawelcome.com
By Martinha at 18:10