Both these cards arrived in 2011. Five years later, Speicherstadt (along with Kontorhausviertel and Chilehaus) was classified as UNESCO WHS.
The 1st is a meeting card sent by Claus and the 2nd is was sent by Guilherme. 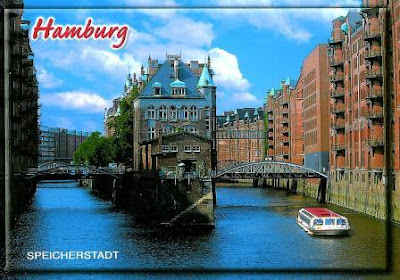 Speicherstadt (lit. 'warehouse city') is the world's largest complex of warehouses, spanning an area of 260,000 square metres. It was built into the Elbe river between 1883 and the late 1920s on thousands of oak poles as a free economic zone in Hamburg's port. Speicherstadt's beautiful neo-gothic brick architecture makes for an exciting contrast to the modern steel-and-glass constructions of neighbouring HafenCity.
As of 2015, Speicherstadt (along with Kontorhausviertel and Chilehaus) proudly bears the honour of being Germany’s 40th UNESCO World Heritage Site. According to the Committee, Speicherstadt — with its unique buildings and winding network of streets, canals and bridges — is an 'extraordinary example of representing one or more eras of human history'. 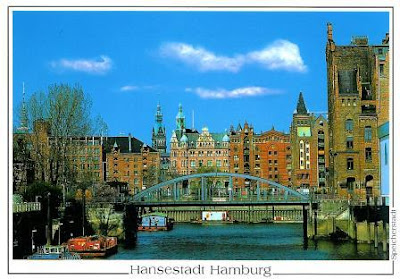 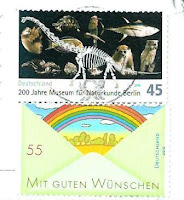 In 1871, the Free and Hanseatic City of Hamburg became part of the German Empire, yet was able to maintain its own tax and customs regulations for a time. This privilege remained in place until 1881, when a new customs union was installed. From this point on, only the free port area along the Elbe river was exempt from import sales taxes and customs. The final annexation of Hamburg by the German Empire was scheduled for 1888, giving the city seven years to create new storage capacities inside the free port area. Before the construction of the warehouses could begin in 1883, around 24,000 people had to be evicted and around 1,100 houses torn down.
In 1888, Emperor Wilhelm II inaugurated Speicherstadt on Emperor’s Day, 29 October, although only the first building phase had been completed. Interrupted by World War I, Speicherstadt construction was finished only in 1927. During World War II, Operation Gomorrha destroyed the western part of Speicherstadt. Reconstructions were finalized in 1967. And on 1 January 2013, an era came to a close when the free economic zone of Speicherstadt, which covered almost a fifth of Hamburg’s entire port area, was dissolved.
Today, Speicherstadt is host to an array of leisure activities. - in: https://www.hamburg.com
By Martinha at 22:09