I really like this one, the colors are amazing. Seeing this natural phenomenon must be something really great. This card was sent by Jutta "blizzard". 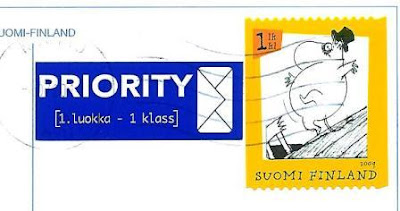 The Finland Aurora Borealis, while best seen in Lapland, can also be witnessed as far south as the capital city of Helsinki from time to time, though on average, there are only some twenty days out of the year when viewing them is possible in most southern parts of the country. Part of the reason why it can be difficult to see the Northern Lights of Finland in Helsinki is because of the fact that it is hard to escape to dimly lit areas. The relative lack of city lights is just one of the reasons why the Lapland region sees some 200 nightly occurrences every year, and one must also consider the region’s northern location. The lower reaches of the Arctic Circle are ideal for viewing the Northern Lights across the planet, which is why Canada and Alaska are good destinations in the Western Hemisphere.

For those who are wondering what causes the Northern Lights in Finland, solar flares are largely responsible. These flares effectively cause solar winds and solar storms, which create lingering atmospheric particles or matter upon colliding with the earth’s atmosphere. As such, scientists can often accurately predict when the best times are for viewing the Northern Lights in Finland by keeping an eye out for solar flares. As mentioned, Lapland is the best place to see the Finland Aurora Borealis, with the Kilpisjarvi area offering the most abundant opportunities. The best time of the day to see the Finland Northern Lights is between 9 p.m. and 11:30 p.m., though they are certainly not restricted to this time frame. - in: http://www.destination360.com/europe/finland/northern-lights