Cathedral of the Archangel - Moscow

One more card from Russia but this one is from Moscow and has been sent by Katerina "eminova". She sent 2 other cards but i already had them. 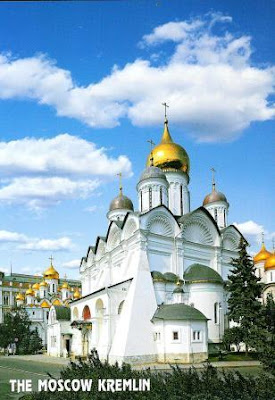 The Archangel Cathedral has played an important role in Russian political history, hosting celebrations of victories by the Russian military and the burials of tsars and grand princes until 1712, when the capital moved to St. Petersburg.
In total there are 54 burials in the cathedral, included 46 ornamented whitestone tombs and glazed cases made of bronze. Especially notable among the long-term residents are Ivan Kalita ("Moneybags"; c.1304-20), Dmitri Donskoi, Ivan the Great, and Ivan the Terrible (1530-84) behind the altar. - in: http://www.sacred-destinations.com/russia/moscow-cathedral-of-archangel
By Martinha at 01:12