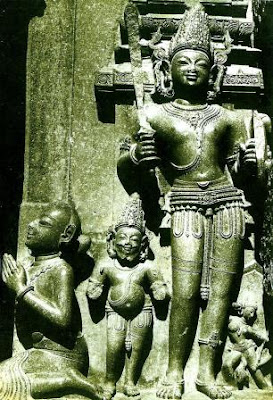 "The Konark Sun Temple (also spelled Konarak) is a 13th-century Hindu temple dedicated to the sun god. Shaped like a giant chariot, the temple is known for the exquisite stone carvings that cover the entire structure.
The Konark Sun Temple is the most popular tourist destination in Orissa and has been a World Heritage Site since 1984. It is located in the village of Konark, which is 35km north of Puri on the coast of the Bay of Bengal." - in : http://www.sacred-destinations.com/india/konark-sun-temple
On the card there's a warrior Pingala with devotee, part of western parsva-devata. 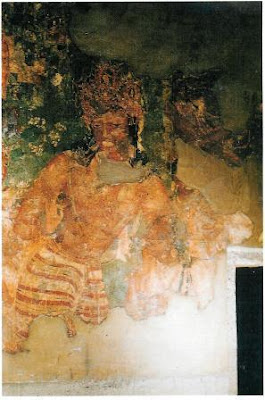 "The Ajanta Caves are a series of 29 Buddhist cave temples in Ajanta, India, some of which date from the 2nd century BC. Encompassing both Theravada and Mahayana Buddhist traditions, the Ajanta caves preserve some of the best masterpieces of Buddhist art in India.
The Ajanta Caves were carved in the 2nd century BC out of a horseshoe-shaped cliff along the Waghora River. They were used by Buddhist monks as prayer halls (chaitya grihas) and monasteries (viharas) for about nine centuries, then abruptly abandoned. They fell into oblivion until they were rediscovered in 1819." - in: http://www.sacred-destinations.com/india/ajanta-caves
The card shows a painting of Vajrapani in cave number 1, the most popular of the monastery caves at Ajanta. 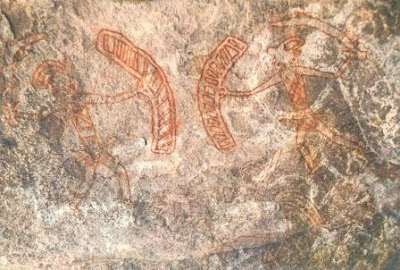 "The Rock Shelters of Bhimbetka are in the foothills of the Vindhyan Mountains on the southern edge of the central Indian plateau. Within massive sandstone outcrops, above comparatively dense forest, are five clusters of natural rock shelters, displaying paintings that appear to date from the Mesolithic Period right through to the historical period. The cultural traditions of the inhabitants of the twenty-one villages adjacent to the site bear a strong resemblance to those represented in the rock paintings.
Bhimbetka reflects a long interaction between people and the landscape, as demonstrated in the quantity and quality of its rock art. Bhimbetka is closely associated with a hunting and gathering economy as demonstrated in the rock art and in the relicts of this tradition in the local adivasi villages on the periphery of this site." - in: www.whc.unesco.org/en/list/925 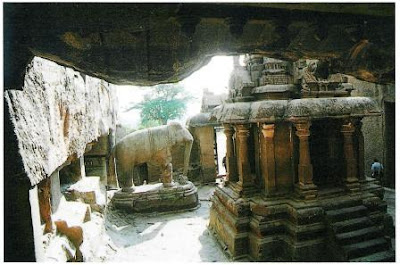 "The Ellora Caves are an impressive complex of Buddhist, Hindu and Jain cave temples built between the 6th and 10th centuries AD near the ancient Indian village of Ellora. The caves have a slightly less dramatic setting than those at Ajanta, but more exquisite sculptures. Ellora is a World Heritage Site and the most visited ancient monument in Maharashtra State.

The caves at Ellora were carved out of the vertical face of the Charanandri hills between the 6th and 10th centuries. The carving work began around 550 AD, about the same time the Ajanta Caves (100km northeast) were abandoned. The Ellora Caves were built at time when Buddhism was declining in India and Hinduism was beginning to reassert itself. The Brahmanical movement was especially powerful under the patronage of the Chalukya and Rashtrakuta kings, who oversaw most of the work at Ellora - including the magnificent Kailasa Temple built in the 700s.

The last period of building activity took place in the 10th century, when the local rulers switched allegiance from Shaivism (Hinduism devoted to Shiva) to the Digambara sect of Jainism.The coexistence of structures from three different religions serve as a splendid visual representation of the prevalent religious tolerance of India. For this reason and others, the Ellora Caves were designated a UNESCO World Heritage Site in 1983." - in: http://www.sacred-destinations.com/india/ellora-caves

This card shows one of the Hindu Caves, cave 16, that actually is not a cave at all, but a magnificent temple carved from the solid rock, patterned closely on the freestanding temples of the time. It represents Mount Kailash, the abode of Lord Shiva, and is called the Kailashnath, Kailash, or Kailasa Temple. 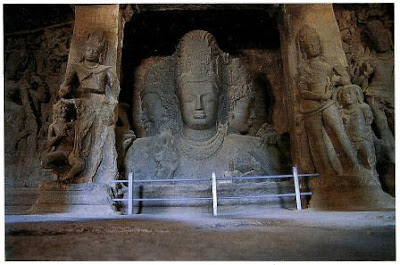 This last card shows the enormous Mahesamurti statue in Elephanta Caves. "At 6.3m (18 ft.), the remarkable sculpture depicts Shiva in his three-headed aspect: as Creator (facing right), Protector (the crowned face at the center), and Destroyer (facing left, with serpents for hair). The Elephanta Caves are a complex of ancient cave temples on Elephanta Island, an hour-long ferry ride from Mumbai. Designated a UNESCO World Heritage Site in 1987, Elephanta Island is not only a worthy destination in itself, it also provides a great view of Mumbai's skyline and an escape from the chaos of the city.
The origins of the temple caves, thought to date from about the 7th century, are obscure. It is known, however, that the island was originally called Gharapuri - the Portuguese renamed it Elephanta after they found a large stone elephant near their landing place. The figure collapsed in 1814 and was subsequently moved to the far-off Victoria Gardens and reassembled.
Shortly before the Elephanta temples were created, Bombay had experienced the golden age of the late Guptas, under whom the arts flourished. Sanskrit had been finely polished, and Kalidasa and other writers had helped incite a Hindu religious revival under the court's liberal patronage. Shaivism, the worship of Shiva, inspired the building of these temples.
Many of Elephanta's priceless statues were damaged or destroyed by the Portuguese, who apparently used the Hindu gods for target practice." - in: http://www.sacred-destinations.com/india/elephanta-caves
By Martinha at 17:05