Mainz is the capital of the state of Rhineland-Palatinate in Germany. The city is famous as the home of the invention of the movable-type printing press, as the first books printed using movable type were manufactured in Mainz by Gutenberg in the early 1450s. - in: wikipedia 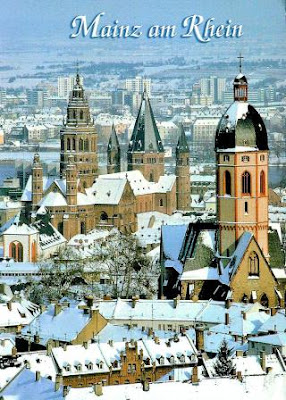 DE-4435084, sent by Thea.
Mainz Cathedral or St. Martin's Cathedral, on the left side, is 1000-year-old Roman Catholic cathedral.
St. Stefan's Church, on the right side, dates from the late medieval era; construction of the main area of the church began in about 1267 and was completed in 1340. 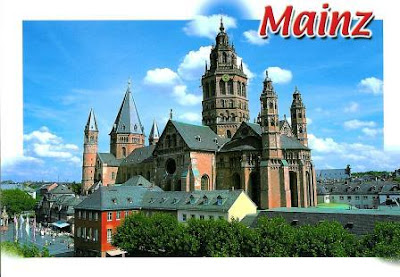 The Cathedral of Mainz dates from 975 AD but was continually rebuilt and restored, reaching its present form mainly in the 13th and 14th centuries. It was at Mainz Cathedral on March 27, 1188, that Holy Roman Emperor Frederick I (Frederick Barbarossa), took up the Cross in the Third Crusade called by Pope Gregory VIII.
Mainz Cathedral is predominantly Romanesque in style, but later exterior additions over many centuries have resulted in the appearance of various architectural influences seen today. It comprises three naves and stands under the patronage of Saint Martin of Tours. The eastern quire is dedicated to Saint Stephen. 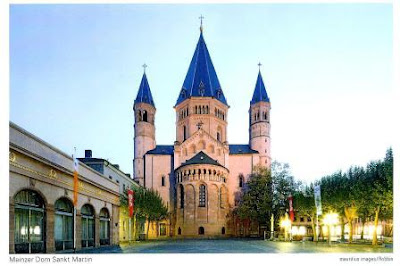 DE-9872322, sent by Inge.
In World War II, Mainz was a target of Allied bombing multiple times. The cathedral was hit several times in August 1942. Most of the roofs burned, and the top level of the cloister was destroyed. The vault, however, withstood the attacks and remained intact. The damaged elements were restored as authentically as possible, a process which continued well into the 1970s. In addition, much of the glass in the cathedral was replaced. 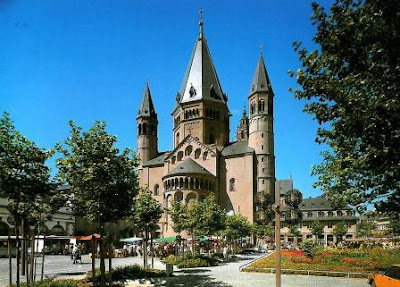 The outside of the cathedral was colored red to match the historical buildings of Mainz. In addition, extensive cleaning and restoration efforts were undertaken, ending in 1975. In that year, the thousandth year since the beginning of the cathedral's construction was celebrated. - in: wikipedia
By Martinha at 20:41