New UNESCO site in the blog!! This doesn't happen that often nowadays. This one from Australia was one of the last added to the UNESCO list. Due to this pandemic the 44th session of the World Heritage Committee, initially scheduled for 29 June - 9 July 2020 was postponed. In November the Committee has decided to hold an extended 44th session in June/July 2021 in Fuzhou, China. I'm already anxious to know the candidate sites.

On 6 July 2019 Budj Bim Cultural Landscape became the first site in Australia to be inscribed on the UNESCO World Heritage List purely for its Aboriginal cultural significance. 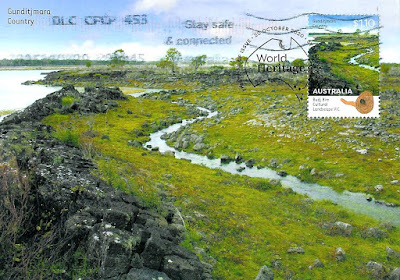 Photograph: Benjamin Church
The Budj Bim Cultural Landscape, located in the traditional Country of the Gunditjmara people in south-eastern Australia, consists of three serial components containing one of the world’s most extensive and oldest aquaculture systems. The Budj Bim lava flows provide the basis for the complex system of channels, weirs and dams developed by the Gunditjmara in order to trap, store and harvest kooyang (short-finned eel – Anguilla australis). The highly productive aquaculture system provided an economic and social base for Gunditjmara society for six millennia. The Budj Bim Cultural Landscape is the result of a creational process narrated by the Gunditjmara as a deep time story, referring to the idea that they have always lived there. From an archaeological perspective, deep time represents a period of at least 32,000 years. The ongoing dynamic relationship of Gunditjmara and their land is nowadays carried by knowledge systems retained through oral transmission and continuity of cultural practice. - in: https://whc.unesco.org/en/list/1577/
Card sent by Helen.
By Martinha at 21:50