Nice card but no idea where was it from. After some research and the help of google images, I came to the conclusion that this is one of Kronstadt lighthouses.

From the beginning of  18th century Kronstadt has been a sea-port. So Kronstadt port needed lighthouses for safe navigation.  The oldest lighthouse of Russia  was constructed in Kronstadt. 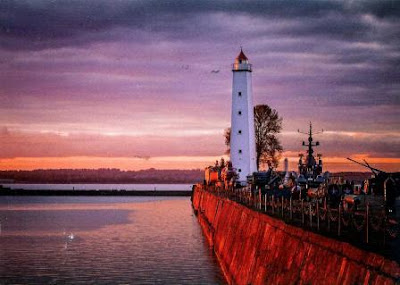 RU-8203154, sent by Oleg.
Sometimes identified as the Kronstadt Lighhouse, the Kabotazhnaya Gavan Rear Range Light is a 95 foot high structure, built in the 20th century, located on the Petrovskaya Pristan mole (breakwater) in the main harbour at the Kronstadt Naval Station, Kotlin Island, Russia. Kotlin Island is Northwest of the City of St. Petersburg.
By Martinha at 10:16