A few months ago Paulo sent me 2 envelopes full of cards and many of them were from Spain. These are all from Costa Blanca, literally meaning "White Coast", a 200 kilometres (120 mi) of Mediterranean coastline in the Alicante province, on the southeastern coast of Spain. 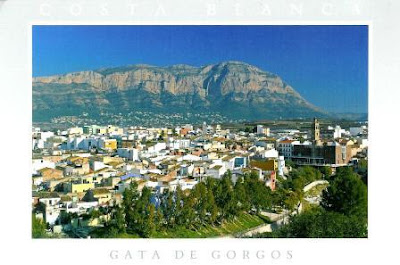 Fotografia: José B. Ruiz
Gata de Gorgos lies in the Marina Alta area of the north Costa Blanca. It is in fact a small market town that is quite near to the popular massive seaside resorts of Javea and Dennia. The city is located on the banks of the river Gorgos or Jalon. It is located amid the inner side towns of Pedreguar and Teulada. It is popular for its bamboo industry. The city is known for its cane furniture, wicker furniture, American style furniture and fine-looking Balinese furnishings. - in: https://www.immoabroad.com 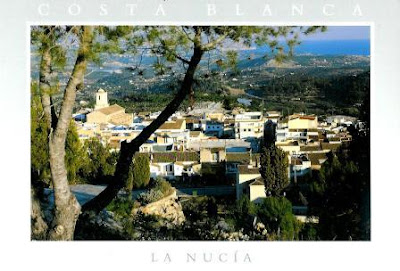 Strategically located on a fertile valley, only 10 kilometres away from Benidorm, La Nucía emerges in a picturesque valley filled with orchards and pinewoods, sheltered by Sierra of Aitana.
The historic quarter contains a network of white houses, dominated by a parish church, with many charming little corners from where the visitor can enjoy gorgeous views of the surroundings. 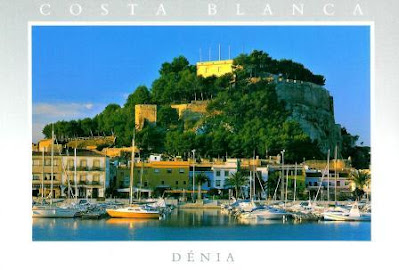 Fotografia: José B. Ruiz
Dénia is a historical coastal city in the province of Alicante, halfway between Alicante and Valencia. The city's historical heritage has been influenced by Iberian, Greek, Roman, Islamic, Napoleonic and Christian civilizations.
Dénia is home to a large Moorish castle on a rocky crag overlooking the city. It was built in the 11th and 12th century and offers views around the sea, the city and the surrounding area. Located in the castle is the Palau del Governador and its corresponding museum. - in: wikipedia
By Martinha at 16:58