I've already been to Mourão but this visit lasted only a few minutes. The idea was to visit the castle, but the minute I got my feet out of the car, it started to rain in such a way that it only gave me time to take a picture, not a good one though. At least now I have these pretty postcards from there. These are two more postcards from that set of hundreds of postcards that Paulo sent me 2 months ago. 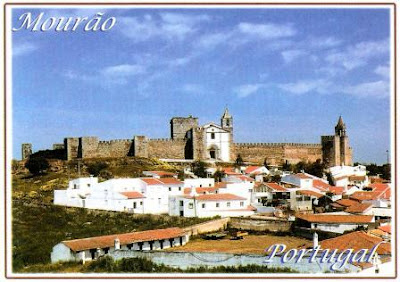 Foto: Cristina Duarte
Mourão Castle was built in early 1343, in the reign of D. Afonso IV. Built at the highest point in the village of Mourão, it consists of masonry in the region's schist, marble and granite. The medieval wall is composed by several doors. 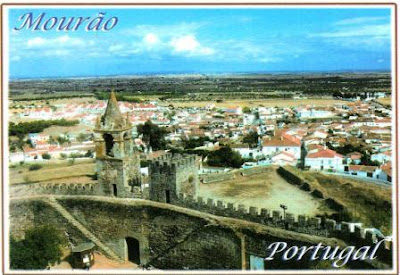 Foto: Cristina Duarte
It has a triangular plan with square towers. Within the walls, the House of the Guarda and the old Town Halls stand out. The military complex preserves, although very damaged, a very unique and picturesque aspect.
By Martinha at 00:12