Yesterday i went on another trip, a short one this time. I went to Guimarães, a city in the North of Portugal. Of course i bought cards but these ones were sent a few days ago by a new portuguese postcrosser Emanuel "sapic12", who lives in Guimarães. 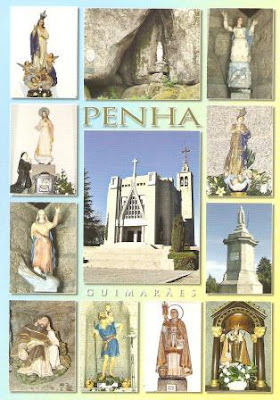 I've visited this place, the Penha Sanctuary, located on the Mount Penha .
Mount Penha a popular spot to visit in Guimarães; besides the sanctuary, people are attracted also by the lure of nature and by the fun activities it offers. Amongst the possibilities to explore are monuments, grottoes, observation points overlooking a vast countryside, a campground, mini-golf, an Equestrian Centre, a tourist mini-train, picnic areas and hiking trails. 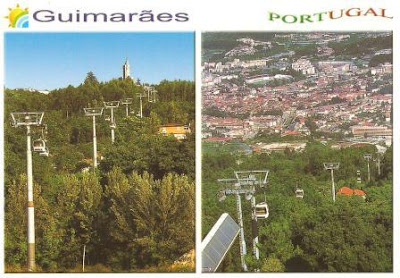 One fun way to reach the top of Mount Penha is to take the Suspended Cable Car, a ride that affords a magnificent view of valley where Guimarães is located.
I took the cable car... it was great :) This was the 1st suspended cable car in Portugal. It was inaugurated in 1995. 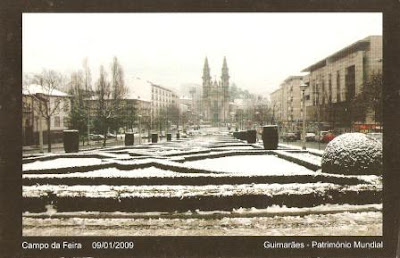 The Church of Our Lady of the Consolation , also known as Church of the Holy Steps or St. Gualter Church, was built by André Soares in the 18th century thanks to the Brotherhood of Our Lady of the Consolation and Holy steps.
The church was erected on the same site where a small chapel has existed since the 16th century. The temple was completed when two towers were added in the 19th century. 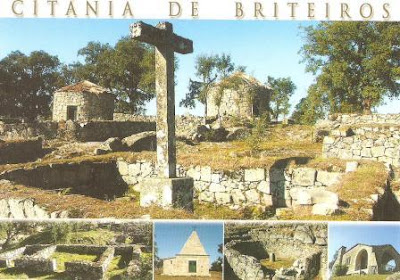 Citania de Briteiros is an archaeological site located outside the city. These ruins of a primitive human settlement are testament of the existence of the pre-Roman people known as the “Castro culture” in northeastern Portugal. Artifacts taken from the site can be visited at the Museum of the Martins Sarmento Society in Guimarães.
By Martinha at 21:06