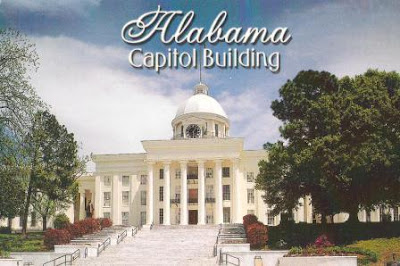 "The Alabama State Capitol, also known as First Confederate Capitol, is located on Goat Hill in Montgomery, Alabama. The structure was built in 1851.
The first Capitol building in Montgomery, Alabama was built in 1847, and was destroyed by fire in 1849. The current State Capitol was built on the previous Capitol's foundations, and was completed in 1851.
The Capitol was declared a National Historic Landmark in 1960. The building and grounds are maintained by the Alabama Historical Commission. One block west is the landmark Dexter Avenue Baptist Church, where Martin Luther King Jr. organized actions of the Civil Rights Movement of the 1950s and 1960s, in opposition to Alabama's government policies." - in: wikipedia
By Martinha at 00:01