Hrodna also known as Grodno is a city in Belarus. Helena "helka" lives there and sent me this card with the Orthodox church of Sts. Boris and Gleb, which i picked from her albuns after she requested one of my cards as a private trade. 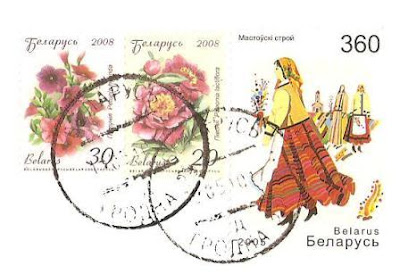 "Hrodna is located on the Neman River, close to the borders of Poland and Lithuania.
The oldest extant structure in Hrodna is the Kolozha church of Sts. Boris and Gleb. It is the only surviving monument of ancient Black Ruthenian architecture, distinguished from other Orthodox churches by prolific use of polychrome faceted stones of blue, green or red tint which could be arranged to form crosses or other figures on the wall. The church is a cross-domed building supported by six circular pillars. The outside is articulated with projecting pilasters, which have rounded corners, as does the building itself. The ante-nave contains the choir loft, accessed by a narrow gradatory in the western wall. Two other stairs were discovered in the walls of the side apses; their purpose is not clear. The floor is lined with ceramic tiles forming decorative patterns. The interior was lined with innumerable built-in jugs, which usually serve in Eastern Orthodox churches as resonators but in this case were scored to produce decorative effects. For this reason, the central nave has never been painted.

The church was built before 1183 and survived intact until 1853, when the south wall collapsed, due to its perilous location on the high bank of the Neman." - in: wikipedia