When i arrived from Rome i've stayed in Lisbon for 1 night to meet some portuguese postcrossers. It was St. Anthony Feast and i wanted to see the street festival and the parade. I didn't see much of the parade but had the change to be a tourist in my capital and went to some of the most touristic spots in the city.
This was kind of a postcrossing meeting so we had to buy and sign cards.
I've sent this card to myself and it was signed by Ana "ninocas" and her husband Ricardo, Paula "geminiscp" and Susana "susanaportugal". Carla and Joana "joaninha" didn't signed the cards but they were also with us. 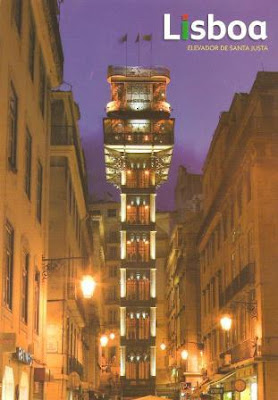 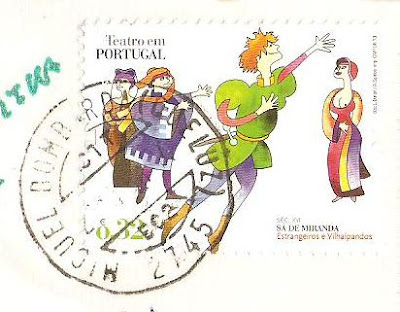 The St. Justa Lift was one of the Lisbon's attractions we've visited.
"The Santa Justa Lift also called Carmo Lift, is a lift in the city of Lisbon situated at the end of Rua de Santa Justa. It connects the lower streets of the Baixa with the higher Largo do Carmo (Carmo Square.)
The Santa Justa Lift was designed by Raul Mesnier de Ponsard, an engineer born in Porto to french parents, and apprentice of Gustave Eiffel. Construction began in 1900 and was finished in 1902; originally powered by steam, it was converted to electrical operation in 1907.
The iron lift is 45 metres tall and is decorated in neogothic style, with a different pattern on each storey. The top storey is reached by helicoidal staircases and has a terrace that offers views of Lisbon Castle, the Rossio Square and the Baixa neighbourhood. There are two lift cages, each with a wooden interior and accommodation for a maximum of 20 passengers.
The lift has become a tourist attraction in Lisbon as, among the urban lifts in Lisbon, Santa Justa is the only vertical one." - in: wikipedia
By Martinha at 15:11