Another great official card, not only because it was one of my favorites but also because it was sent by a forum member, in this case, a portuguese member that lives in Belgium.
The card descipts St. Rumbold's Cathedral towering over the Market Square in Mechelen, Dutch-speaking city in the province of Antwerp. 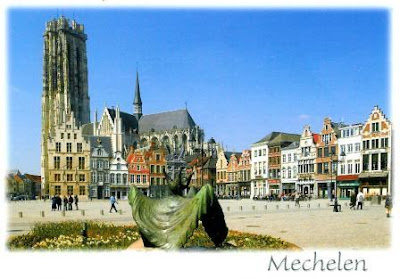 BE-98157, sent by Raquel "ferro".
"The cathedral was built in honor of Saint Rombout (Rumbold), a 17th century irish missionary, and it is rumored that his remains are buried inside the cathedral. State-of-the-art examination of the relics assumed to be St. Rumbold's, showed a death date between 580 and 655, while tradition had claimed 775. Twenty-five paintings in the choir illustrate the life of the saint.
The construction was started shortly after 1200, and during the final phase in 1452-1520, the tower of the cathedral itself was built.
The flat-topped silhouette of the cathedral's tower is easily recognizable and dominates the surroundings. The original design called for a 77-meter spire, but only 7 meters of it were ever actually built, hence the unusual shape. Despite its characteristic incompleteness, this World Heritage monument is 97.28 metres high and has 514 stairs which are visited by thousands of tourists every year." - in: wikipedia
By Martinha at 18:27