These are cards from Stargard Szczecinski with it's Town Hall, Artus Court in Gdansk and Wroclaw Town Hall. Stargard Szczecinski Town Hall is the biggest medieval town hall in Pomerania. It was built around 1250 and it was rebuilt in 14th cent. Today's late-gothic fasade dates from the second half of 16th century. A great fire in 1635 destroyed the Town Hall together with town's archives. It was rebuilt but destroyed again in 1945. The last rebuilt was in 1957 - 61. 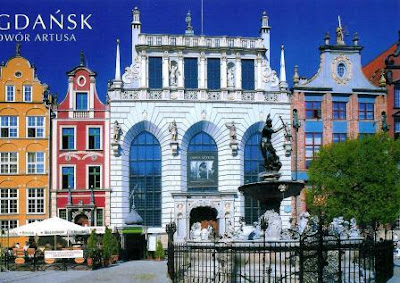 The Artus Court is a building in the centre of Gdansk, Poland, which used to be the meeting place of merchants and a centre of social life. Today it is a point of interest of numerous visitors and a branch of the Gdańsk History Museum. 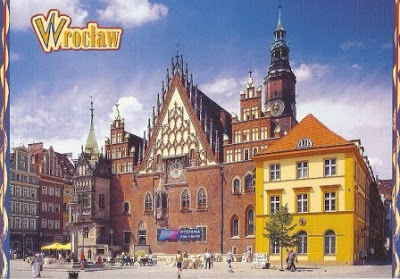 Wroclaw's splendid Gothic Town Hall is the cynosure of the Market Square, and for centuries the most important building in the city. Although construction began in the 13th Century, extensive modifications continued to be made right up to the 16th Century meaning that the hall showcases a mix of architectural styles, principally Gothic and Renaissance. The Town Hall even boasts it's own astronomical clock.
It was under the Town Hall's vaulted ceiling and sculpted pillars that the Wroclaw's political big wigs debated difficult decisions through the ages, and guests of honour were received.
Today the building has lost its political functions and tourists are allowed to ogle at the splendid interiors of rooms such as the Burgher's Hall and the Great Hall, visit the Museum of City Art or sample some finely fermented hops at the famous cellar bar, Piwnica Swidnicka.
By Martinha at 18:08