This is my 2nd card from Ecuador and like the 1st one, is also from an Unesco site, in this case, the city of Quito, the capital city. Quito, along with Krakow, were the first World Heritage Sites declared by Unesco in 1978.
The card was sent from Croatia by "ddonkey". 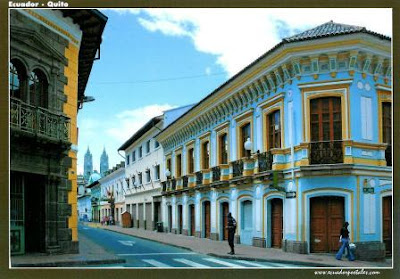 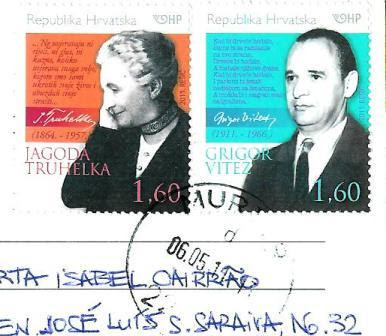 "Quito has the largest Historic Centre, least-altered and best-preserved in the Americas. The Historic Centre of Quito is located in the center south of the capital on an area of ​​three hundred twenty hectares, and is considered one of the most important historic areas in Latin America. Has about 130 monumental constructions (which hosts a variety of pictorial art and sculpture, mostly of religious inspired in a multi-faceted range of schools and styles) and five thousand properties registered in the municipal inventory of heritage properties. Unfortunately for several years has been somewhat neglected, which contributed to the deterioration of many of its buildings and surrounding streets to see invaded by informal trade. This not only played down beauty but also contributed to the sector has become unsafe. But now everything has changed thanks to the program that the Corporation of Development of the Historic Center is pushing to return to this place its glory of past years.

Walking through the historic centre of Quito today, now that it has been almost completely recovered, it has again become a pleasant experience. The Corporation of Development of the Historic Center, is responsible for the restoration and conservation of churches, streets and plazas of this place. It have implemented several tourist sites that invite to visit the Historic Center on a trip to the past, which is not only tourism but also educational. To this end, members of the Municipal Police have been trained to serve as guides in those tours. At night, when the lights turn on the city it can stroll through downtown in a horse-drawn carriage to the colonial style." - in: wikipedia