This is my 2nd official card from Ukraine. The card shows the Church of Resurrection and the monument to the three bags in Sumy, a city of Northern Ukraine, situated on the beautiful banks of the rivers Psel and its tributary Sumka. 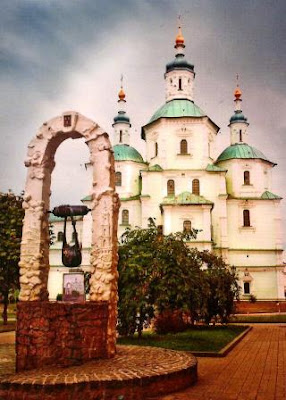 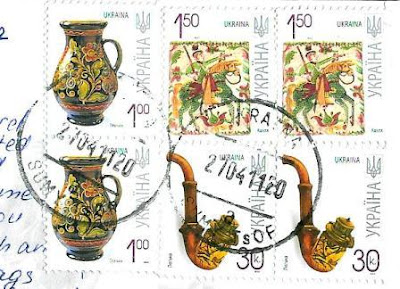 Resurrection Church was started by the city's founder Gerasim Kondratiev and was finished by his son Andrew in 1702. It served both as a place of worship and a defensive structure.
"The threes bags monuments is associated to an old legend. According to it "migrants from Stavyshche that is situated in Kyiv region, led by ataman Herasym Kondratyev in summer of 1655 found three hunter bags with coins on the place where little river Sumka merged with calm and spellbound-like river Psel.
This event found its reflection in the name of the city and the emblem of Sumy. ("Sumy" can be translated as "Bags").
This legend is still alive in hearts and souls of Sumy citizens. These bags are a fascinating attraction for all guests of our city that desire to touch them in order to entice happiness and wealth to their homes." - in: http://meria.sumy.ua/en/sumy/culture/culture_general
By Martinha at 21:55