I never thought it would be possible for me to have so many unesco sites from South Korea. The country has 10 sites inscribed on the list and, with these 2 new cards sent by Adam, i already have 7. These cards are from Gochang, Hwasun and Ganghwa Dolmen Sites and Haeinsa Temple Janggyeong Panjeon, the Depositories for the Tripitaka Koreana Woodblocks. 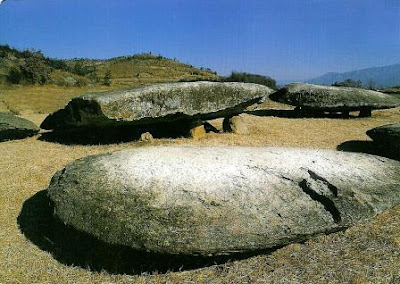 This card shows the Gochang Dolmen Sites, the largest and most varied group of these dolmens. "The Gochang, Hwasun and Ganghwa Dolmen Sites are the location of hundreds of stone dolmen which were used as grave markers and for ritual purposes during the first millennium BCE when the Megalithic Culture was prominent on the Korean Pensinsula. The sites were designated as a World Heritage Site by Unesco in 2000. Korea is said to contain more than 40% of the worlds dolmen, which are mostly concentrated in these three sites.
The megalithic stones are invaluable because they mark the graves of the ruling elite. Pottery, comma-shaped jewels, bronzes, and other funerary artifacts have been excavated from these dolmen. The culture of the people during this time can be gleaned from the evidence left by the dolmen. Additionally, the stones show how stone was quarried, transported, and used to build dolmen.
Dolmen in Korea have been dated to the seventh century BCE in locations such as Gochang and the practice ended around the third century BCE. The dolmen culture is linked with the Neolithic and bronze cultures of Korea." - in: wikipedia 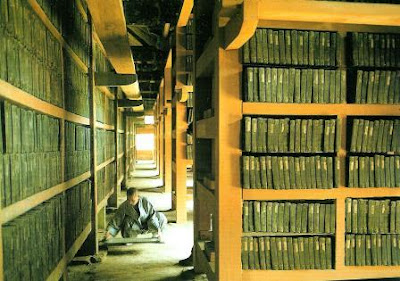 "Located deep in the mountains of Hapcheon County in southeast Korea — emphasis on the word deep — Haeinsa Temple is one of Korea’s three largest Buddhist monasteries, one of the “Three Jewels,” as Korean Buddhists prefer to call them. A UNSECO World Heritage Site, the compound is home to the Tripitaka Koreana — a 13th century collection of woodblock carvings of the Buddhist scriptures and the oldest and most complete edition of the Buddhist canon in Chinese characters. For centuries, the monastery has been the scholastic center of Korean Buddhism, preserving the traditional of scriptural studies through the generations." - in: http://english.visitkorea.or.kr/enu/SI/SI_EN_3_6.jsp?cid=559527
By Martinha at 18:07

I heard that it is hard to find postcards in South Korea from other Koreans. Glad to see you that you have received many Korean UNESCO World Heritage postcards.